Could you provide feedback on my modem's  (Netgear CM1000) signal levels?  I have Gigabit Internet service, but am only getting consistently around 550Mbps; however, my uploads are dramatically improved since the upgrade.  Thanks for your time and efforts! 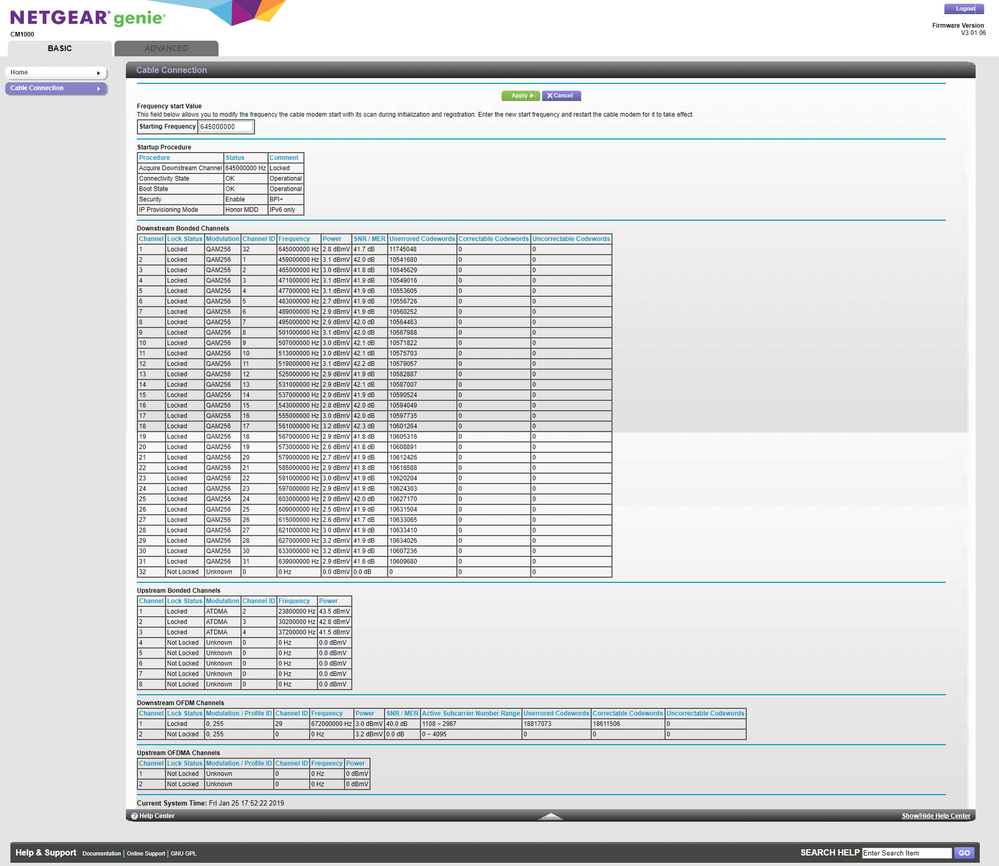 This web page had some good info on what the signal levels should be for an optimal connection.

Looking at what you posted there, you're in good shape? The absolute lack of ANY recoverable or nonrecoverable errrors on any of the channels is almost hard to believe.  (Did you capture that log immediately after rebooting the modem, perhaps?)

I was told my own cable connection with Comcast was "excellent", and I have between 850 and 1600 or so recoverable and non-recoverable errors logged for each of the channels.  (That's supposed to be "within spec".)  So having 0 is amazing, IMO.

Thanks for your response. Those results were captured shortly after a modern restart. I'll check the log again tonight when I get a chance. Bottom line is there still isn't any improvement.
Model: CM1000|DOCSIS® 3.1
Message 4 of 5
0 Kudos
Reply

Yeah....   Are you certain you're using a computer with a gigabit capable Ethernet adapter, plugged directly into the Ethernet jack on the back of the cable modem, to do the speed testing?

I'm just mentioning that because otherwise, you may have other things acting as a bottleneck to the total speed.  (I had a problem for a while because I use an Ubiquiti Edgerouter-X as my router behind my cable modem. I discovered I had to change a couple of settings in it to make it route traffic using the hardware chip inside it, as opposed to via the software/firmware it runs. The processor inside it isn't real powerful and I guess couldn't keep up with gigabit speeds without that change.)  You'll also never see gigabit speeds over wi-fi.  Even with the lastest "dual band wireless AC" chipsets, you don't really see over maybe 500mbits/second or so in normal use.

All that being said? I ran into this same problem and I'm still working with Netgear tech support to try to get some resolution. (At the moment, we're chalking things up to some compatibility issues on the "head end" at our Comcast cable company's office. Comcast confirms they have many customers using these CM1000 and CM1150V modems at gigabit speeds successfully. Yet I couldn't get it to work for me over here like the Comcast provided XB6 router does.)