Stuggling to find answers with regards to IPV6 being used with BT infinity in the UK, im reading loud and clear that BT uses 56 prefix delegation which apparently this router does not support and no other netgear router will support? I have only just bought this router, BT rolled out IPV6 a year ago so i dont understand why a brand new router would fail to support this? On the ASUS AC68u you only have to select NATIVE and it does the rest for you so why is Netgear so against giving us the firmware to support this with the biggest UK ISP? The box art says compatible with BT Infinity which as it stands is not quiet the case but give it a couple of years and that will be a clear lie unless the firmware is updated. Thats against our advertising standards within the UK and will need to be addressed. Im very concerned that this router is not only not future proof but pretty much outdated already if i cant support year old systems.

The D7000 was my choice originally for its ability to handle Xbox connections, any advise for alternatives that offer support for all IPV6 types would be appreciated as i will probably return this router soon.

Many Netgear devices do not support the flavour of IPv6 that BT uses.

There are past messages around here. Sadly, the forum's search cannot find them that easily.

Yeah i knew there were past posts but only through using google search, i struggle to find anything using netgear seach.

I was really hoping that something may have changed between that post and now, is there really no chance they budge on creating firmware that includes BT's IPV6 type. I know BT can be awkward but at the end of the day they are the biggest ISP in UK.

What is a fritzbox? never heard of them and they look abit cartoony which is putting me off but ive seen alot of people go with them?

It would help if Netgear told us which modems and routers do support BT's flavour of IPv6. After all, Homehub modems are a pain.

It seems like they are very tight lipped about it..... my biggest fear is how long until IPV6 is an actual requirement? surely at that point a large portion of UK customers are going to dump netgear stuff unless they decide to push a firmware update that works with it, surely they can't ignore it?

I only bought the D7000 to give me open NAT on my two Xbox Ones at the same time and i have to say it works perfectly so far, me and my partner get to play and communicate perfectly. Am i right in thinking that if our Xbox Ones run on IPV6, NAT type and issues become a thing of the past anyway? If thats the case i just need a router that supports BT's IPV6PD

Just has an email from NETGEAR asking if my question was answered.....

Yes it was, i returned my NETGEAR to the store and i got myself an ASUS DSL-AC68U and it does everything and easily 3 times more than the netgear and it does it alot better. Multi console Xbox One OPEN NAT and IPV6 native with BT. If anyone needs help setting up an ASUS DSL68U to run on BT with IPV6 and multi XBOX ONE with OPEN NAT then hit me up. Its relativley easy anyway but incase anyone is on the fence im happy to help. Thats not to mention its true QoS settings and abilities and all its traffic monitoring and managing ability.

Morale of the story..... dont buy into a company that doesnt support want to support the UK market.

It's really astonishing that IPv6 support, as in the /56 - /48 PD,  is not implemented in all new routers.  Many complaints on the BT forums about Netgear's lack of support and apparent disinterest in satisfying existing customers needs.  BT are not the only UK ISP delegating more than a /64 prefix.

Asus, Billion, DrayTek, FritzBox all support IPv6 /56 and /48 prefix out of the box.  Billion have since 2012.  I'm using a FritzBox just now on Infinity,  used Netgear routers for several years.  That is until BT stated they were rolling out IPv6 in 2016.

Looked around for kit that supported IPv6 and settled on the Fritz.  Been running the FTP server using IPv6 only for 16 months.  The Fritz also has an onboard packet trace function, multiple ports, wireless connections, USB etc can be logged simultaneously and analysed in Wireshark.

It would be commercial suicide not to support IPv6 properly.   TP-Link made the same mistake, hard coding /64 in firmware, they are now scrambling to catch up after BT forum members quizzed them on the issue.  They have at least produced some Beta firmware for users to try out and are concentrating on fixing the newer models

Worse, Netgear makes it hard to find out which devices to support BT's flavour of IPv6.

We've asked that question here before (see above) but have never seen a meaningful answer.

This is pretty well the only response there has been from Netgear:

BT Infinity ISP uses IPv6-PD IPv6 configuration our devices do not support IPv6-PD configuration and we do not have any plans to support this on D6400,D7000, D7800 or D8500 in future.

That was last December.

Worse, Netgear makes it hard to find out which devices to support BT's flavour of IPv6.

I think it more than a little disingenuous to keep referring to "BT's flavour of IPv6" as if they're doing something proprietary or wrong.

It then goes on to state:

"However, if, for example, only a /64 is offered by the ISP, the homenet may be severely constrained or even unable to function. BCP 157 [RFC6177] states the following:

A key principle for address management is that end sites always be able to obtain a reasonable amount of address space for their actual and planned usage, and over time ranges specified in years rather than just months. In practice, that means at least one /64, and in most cases significantly more. One particular situation that must be avoided is having an end site feel compelled to use IPv6-to-IPv6 Network Address Translation or other burdensome address conservation techniques because it could not get sufficient address space."

In this case BT are not the constraining factor as they are offering prefix length of /56 in their DHCPv6 Prefix Delegation. So whilst it can be seen that BT are following to the aforementioned standards and offering prefix shorther that /64 as recommended, it would seem that Netgear are continuing to follow the recommendations of the superseded RFC3177, dated September 2001.

And if you take a look at slide 7 "Residential Service" of the Sky IPv6 Update you'll see that Sky's IPv6 implementation also adheres to the same standards. In this case it appears to be Netgear that has its own, very outdated, flavour.

Any word from Netgear on the support for IPv6 with BT infinity? I assume this is still not fully supported as i can't get it working on my D7000v2. I guess I will have no choice but to find another router.


I guess I will have no choice but to find another router.

It isn't even obvious that Netgear makes any modem/routers that support BT's implementation of IPv6.

The best place to find out may be the BT user forum. It is a long running saga.

As smf22 has explained BT's implantation of IPv6 is going by the book.  It's the Netgear firmware that looks likes it's hard coded for a /64 prefix.  Which is rather short-sighted.  The /64 is what your router would delegate to your LAN, drawn from the pool of 256 the ISP delegates to you with a /56 prefix.  See chart. 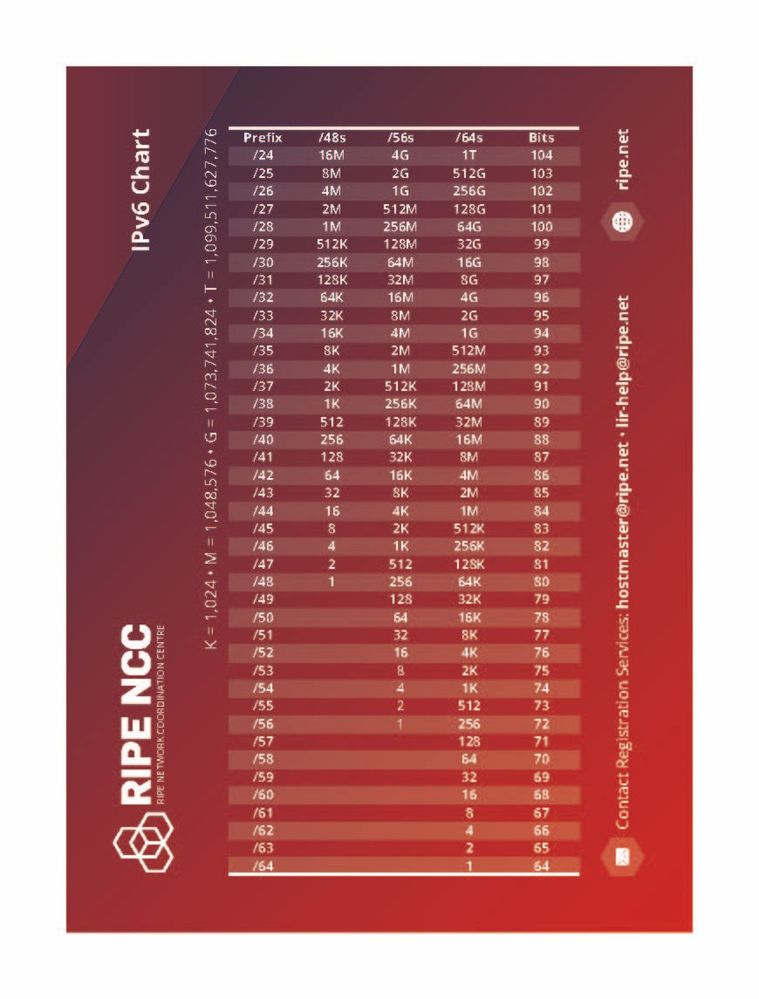