After a long time of great use from my WNDR4500 it has just given me two days of routing hell and now thinks it's an Asus RT-AC56U!

Two days ago all the media servers vanished from the PS3 XMB. I rebooted everything, including the router, with no joy. It turns out the router was giving random IPs to my devices, the MacBook was 192.168.1.174, the PS3 also had a random 192.168.1.x address. Everything still connected to the internet though. I checked the router settings (the router was still 192.168.0.1) and all was fine so in an attempt to fix the problem I updated the software and then did a factory reset.

Now my problems are worse... I can't login to the router at all. The default address is now 192.168.1.1, however routerlogin.net or .com don't work, nor does the default login of admin/password doesn't work. Not only that but the router login prompt is saying, "The server says: SC-AC56U" which is actually an Asus router! I'm using a wired connection so it's definitely the Netgear router I'm connected to. 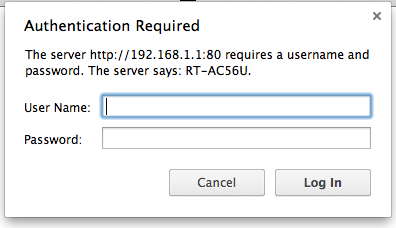 Is there any way to upload software or do anything to try and restore the router without logging in, such as via USB?

I look forward to any replies.

What you have described sounds like a second router has been added to your network - I would start by disconnecting the router from everything else except the modem and a single wired PC and then see what the router thinks it is.
Give a man a fish, feed him for a day
Teach a man to fish, feed him for life.

Thanks for the reply.

There's no second router and I never changed any settings. It was fine one day then a mess the next... I can still get online, however whereas my internet connection is 152Mb/sec, I'm only getting speeds up to 1.5Mb/sec. Could someone in an upstairs apartment with an Asus RT-AC56U be affecting my network?

I can also connect to it over wifi if I use the default login on the sticker, but not the UI using the default admin / password.
Message 3 of 5
0 Kudos
Reply
Highlighted

The problem appears to be related to my powerline adaptor.

I have the XAV5004 500Mbps kit which I've been using since their release. Now if I disconnect it the adaptor from my router everything is fine, however reconnect it and it's not long before my devices change IP and the network goes haywire. Now I do live in a block of flats (or apartments) and someone new has moved in above me but even if he has powerline adaptors each flat is on it's own ring main.

I'm not sure what my solution is. Would different adaptors make a difference? I was thinking of the 1200's with a 4 port switch on the end but if it's not going to work if I'm getting overtaken by a different network then there's no point. I might be better getting another ac router for the living room and use it as an access point.

Are there any other option for isolating my powerline adaptors? I've only tried the Mac utility which can't find them.

Check if the two powerlines has security button. Press it on devices to secure their connection. If it is enabled in your powerline network, your neighbors powerline will not be able to communicate with your powerline.