@DexterJB, please inbox me a solution if theres any. I have been hunting down the community web pages and the internet for a solution to this problem. My router is not in AP mode and guest mode is activated. I tried downgrading the firmware, it didnt work. Same after updating to the latest firmware and doing a factory reset. Still ends up at 'Page Not Found'. Please help me ASAP. 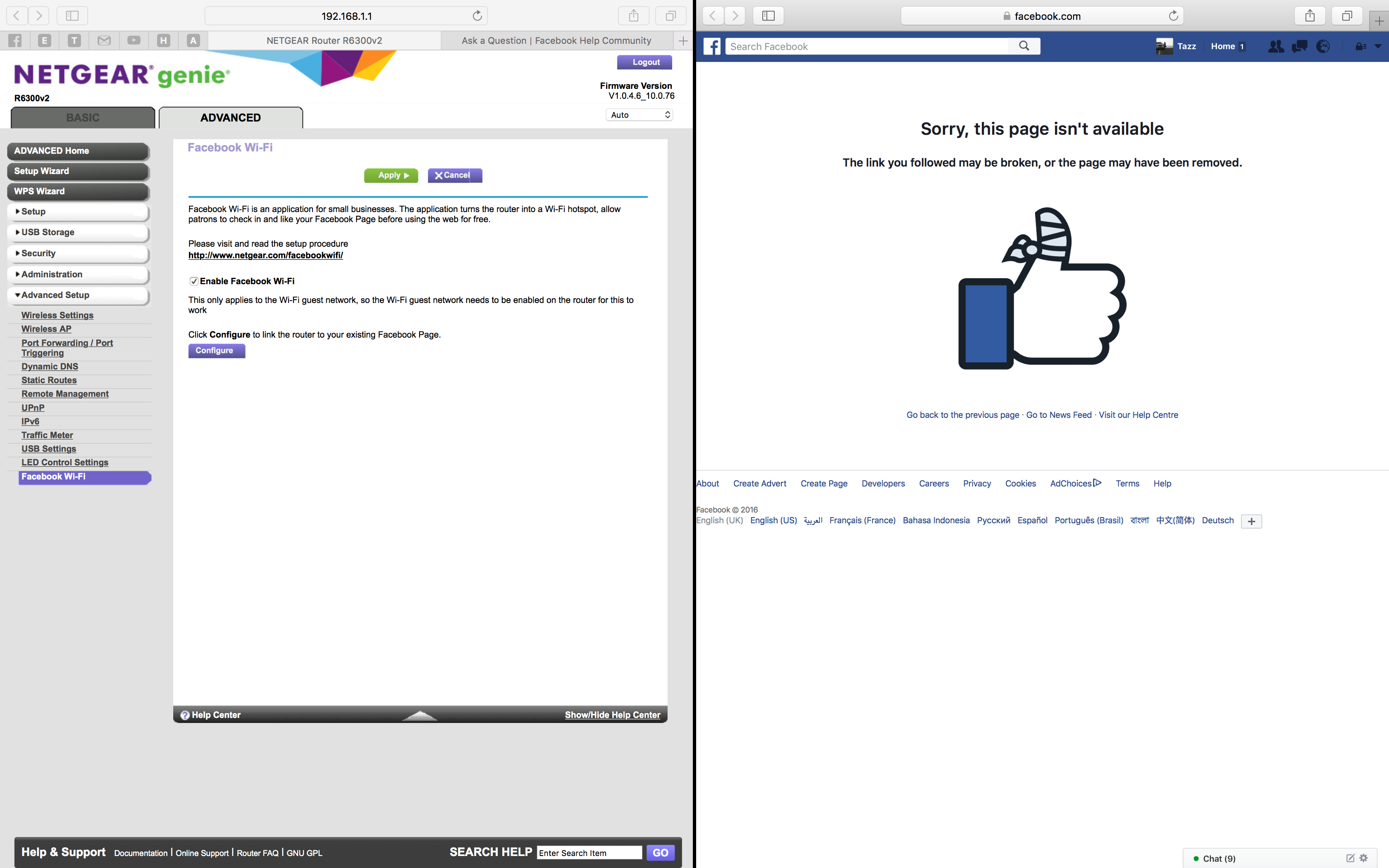 Exactly the same issue as EVERYONE else here too

would it not be handy to post the solutions on the forum rather than sending them to private messages???

I am also directed to a "page not found" error on the following link: https://www.facebook.com/wifiauth/config?gw_id=

Netgear team is not giving any proper solution sofar, i am always getting , their technical team is working on the same.. thats it

I have accepted terms and conditions. I have send this confirmation already once. Ihope you will find it now.

Thank you very much.

Can someone send me the solution.

Hello I have same problem with configure link. Is there any solutions?

Sorry, this page isn't available The link you followed may be broken, or the page may have been removed.

I notice there has been no solution posted to this as of yet. I PM'd Dexter and was told I would be contacted by a support expert but have not yet heard.

I actually got a working solution by downgrading the firmware. I downgraded the firmware to 'Firmware Version 1.0.3.28' available here.

The splash page / Facebook check in page is completely bypassed and does not appear for https requests - that is - basically the entire web nowadays. e.g. Google, Facebook, phone apps including 'what's app', etc.. Completely unfeathered access with no gains from the Facebook hotspot service.

I am not sure yet as to whether this is a constraint of Netgear or of Facebook. Does anyone know? A few searches have lead to me believe the issue exists on other Facebook wifi enabled routers.

I have toyed with the idea of blocking the https port so that all traffic runs over http therefore ensuring authentication through Facebook check in. I am just unclear right now as to the implications of that i.e. will websites work e.g. gmail, google search etc. or throw an error. And of course consumer trust. Thoughts?

I am also experiencing an issue with this.  Actually the Facebook wifi tab isnt even there. I have the latest firmware V1.0.4.6_10.0.76

but as I cant even see the facebook config option I am lost.

I dont even get to see the Facebook Tab in advanced.  If you get any response from Dexter, could you re-post as this is clearly an issue.

I am not able to use facebook wifi. When i Enable the facebook wifi and click to the configure button it redirects me to the page https://www.facebook.com/wifiauth/config?gw_id=

Please help me to resolve

I am having the Same issue with my R6300v2. Please advise what the solution is..

Is there a solution, anyone on the thread actaully managed to get Facebook WiFi operational?

Kindly let me know, which ver. you are using ?

I was facing the same problem, and somehow i come out from the issue...

From reading many (many, many) posts the link is the problem.

After the id= there apparently should be a token generated by the router to make something more like;

That makes sense. Are we on the right track and if we are how do we get that token?

The Token may be a Facebook generated token that carries you to the setup screen to link to your business page.

I cannot seem to get any help from netgear staff on it...

Same problem with me here ! I had old NightHak R8000 which not support FB wifi, i did bought one R6300v2 on amazon but today i configure FB wifi then stuck at link: https://www.facebook.com/wifiauth/config?gw_id=

I need to Unplug to restart the router .... but same problem happened.

I downloaded the latest firmware and it didnt work.  I then downloaded the previous version and the Facebook wifi link did work and I was able to set it up.

It worked on my phone when I tried it, but when my customer did the same, he got a different response.  My phone is Android, his phone is Apple.

In any case whether you get it to work or not, its a waste of time because users can "skip check-in" which totally defeats the reason for having the option.

The way the product is marketed says that users "check-in and like your page before getting free wifi".  This is incorrect and false advertising.

You can hit the business Facebook page and "skip check-in" and still get free wifi.  So whats the point ??

I dont have enough money to take on Netgear in court over false and mis-leading advertising but if I did, I would.

In fact I have less money now from when I started on this project as I have purchased the router but my customer, quite rightly, wont pay me for it as it doesnt do as it was supposed to do.

hi pugwash1971,
After logged in ... at the Facebook wifi configuration there have an option to enter your private key if user skip check-in

Btw, for problem stuck at https://www.facebook.com/wifiauth/config?gw_id=
I figured out that my router is not configed access internet via Internet port and provide it own DHCP. After re configed internet port... my 'facebook wifi' is successfully set up
Message 47 of 63
0 Kudos
Reply

Other routers listed on the facebook page are also acting the same way, I've tried a couple of models now, so the customer (coffe shop ...) should know that not all customers will share location or like their page.

(tl;dr: If you want a really working Facebook Wi-Fi solution, find an alternative, I've finally used a gateway from a cloud-manged brand, it worked really nice but I have to pay both hardware and yearly fee)

(Declaration: Not IT professional, now deployed FB Wi-Fi Solution from another brand instead, and my 6300v2 is now vacant)

Initially I checked Facebook Wi-Fi supported list showing quite some brands (some are pricey enterprise products, and some are more affordable/residential ones), among the list I chose R6300v2.

However, the Facebook Wi-Fi worked in a way -- Blocking Port 80 only and leaving all the rest ports opened, this is probably the laziest solution since almost no firewall rules are being touched, the router just tap 80 connection, moreover, since HTTPS is blocked and Facebook has been using a CDN (i.e. you can't determine what website the client is requesting), if they block HTTPS it will be too difficult to implement, so they left HTTPS (and other non-80 Ports) free. (Technical side: I think they just deploy a simple proxy server to divert all 80 traffic with a gatekeeper mechanism, non-80 traffic are directly routed out)

However, the world has changed a lot. Nowadays, most applications are using HTTPS as primary protocol (Google, Facebook, WhatsApp.... you name it!), even Google Chrome and some other browsers are prompting unsafe alert in non-HTTPS website, and under the current working mechanism, all these websites and services are freely accessible (without doing checkin/code/not even a button), not only HTTPS, if you got a VPN (Whatever, PPTP, L2TP or just SSH Tunneling), by connecting it you have jail-broken the walled garden, so the Facebook Wi-Fi feature is basically useless.

Well, Netgear is not the only brand that have such problem, you can enjoy non-80 port access other consumer brands (some enterprise brands, too) Facebook Wi-Fi routers.

The ultimate, technical way to solve this is implement a firewall-based mechanism, blocking all non-Facebook connection (regardless ports), the description in this open souce package has enough insight to make facebook IPs inside walled gardened (tl;dr: Cache DNS queries, and dynamically releasing IPs that matching Facebook/FBCDN domain names Reference: https://github.com/mhaas/fbwlan), the large memory and flash size is more than capable to incorporate such features. It's up to how much works Netgear would like to done. (Well, maybe it isn't Netgear's fault, if you look into GPL of R6300v2, FBWiFi part is precompiled, and you may notice other consumer-grade routers with Facebook Wi-Fi are all ARM-based, maybe it's Facebook's issue, but unlikely, it's rather someone not want to disclose the code)

If I have access to the official API on FB Wi-Fi, I would never buy this router.

As everybody here, I have the same Issue, I have written Facebook and they don't reply. Even wrote Mark Zuckerberg, no answers either. Is there anything ? Or has this system ever worked before?