Just installed my Netgear Nighthawk X6S. The light between #s 1 & 2 is amber. Couldn’t find troubleshooting info in manual or internet. Can you help?
Message 1 of 3
image.jpg ‏2072 KB
Me too
0 Kudos
Reply

It's not about an error - even if the amber LED became much to "redish" in my opinion with several newer products, leading customers to believe there is a problem indication. The amber LED on the Ethernet port(s) does indicate a negotiated link speed of 10 Mbit/s (plain ol Ethernet, some computers use this in WoL mode), 100 Mbit/s (Fast Ethernet).

Cause is that either the system connected does not support Gigabit Ethernet, or the network cable does not have four correctly wired and working pairs (eight strands). Low cost cables supplied with communication equipment from earlier decade have often just two pairs for example, too. Very rare, there is an incompatibility making the Gigabit Ethernet negotiation fail. 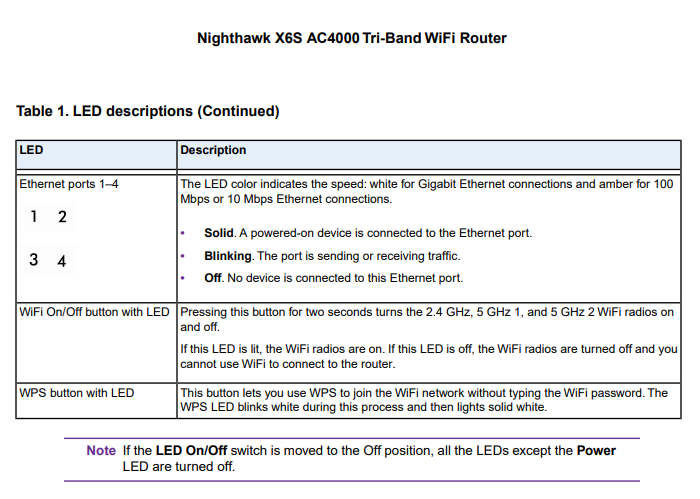 To expand on what @schumaku says, tell people what these devices on the LAN are and they may be able to confirm that they are 100 Mbps only, and that orange is all you will ever see.

Devices that usually have 100 Mbps include TVs and other media devices. That speed is fast enough for them.