Re: How to prevent Genie Media Service from starting after a reboot (Genie Ver 2.4.48 for Windows)?

How to prevent Genie Media Service from starting after a reboot (Genie Ver 2.4.48 for Windows)?

By default, every time NETGEAR Genie Ver. 2.4.48 starts, it creates a new version of the Genie Media Server on every other networked computer.  Addional instances of Media Servers are started every time the Genie Application is restarted, unless the Media Services are stopped in Genie's My Media setting.  However, upon computer reboot, the Media Service stopped setting is lost and a new instance of Media Server appears again on every networked computer.  Over time, the net result is a large number of Genie Media Servers in Devices and Printers on every computer. The server instances must be manually shut down one-be-one, creating an uncontrollable annoyance.  This behavior has been reported for many years, and is still present on the latest version for Windows 10. 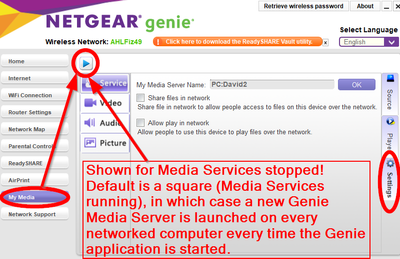 Re: How to prevent Genie Media Service from starting after a reboot (Genie Ver 2.4.48 for Windows)?

Here is one of the links to the same problem, reported in depth to this forum 4 years ago:

Nothing has changed in latest Windows 10 and latest version of Genie.

The only proposed solution is to turn off Network Discovery, which is no solution at all if you want to do file sharing between computers.

NETGEAR, DO YOU AT LEAST ACKNOWLEGE THIS PROBLEM??

WHEN WILL YOU FIX THIS??