And may i know what is the sympton of the LAN disconnection? And it affects all wired devices and wifi devices?

Did you connect a XBOX with instant-on mode enabled? And did you enable QoS congestion control feature to set as Always or Auto-Enable?

The LAN disconnection only affects LAN connections, WiFi has no issues.  I do not have an xbox connected to the network.  QoS is set to Never.  I cannot reconnect regardless of manual intervention steps taken, randomly after router restart the connections will reestablish

An interesting log line is the following (shortly before the LAN disconnection):

The reason why it's interesting is 192.168.1.7 corresponds to one of the LAN connections (70:85).  Namely, it's the only address I'm using address reservation for.  Not sure it's related to the disconnection issue.

@fooka03 The debug page will be like below, Please try to click the "Enable LAN/WAN capture", then "Start capture", wait for 5 minutes, then to "Save the debug log". Without the debug log, it is hard to know the LAN disconnection issue you have now. 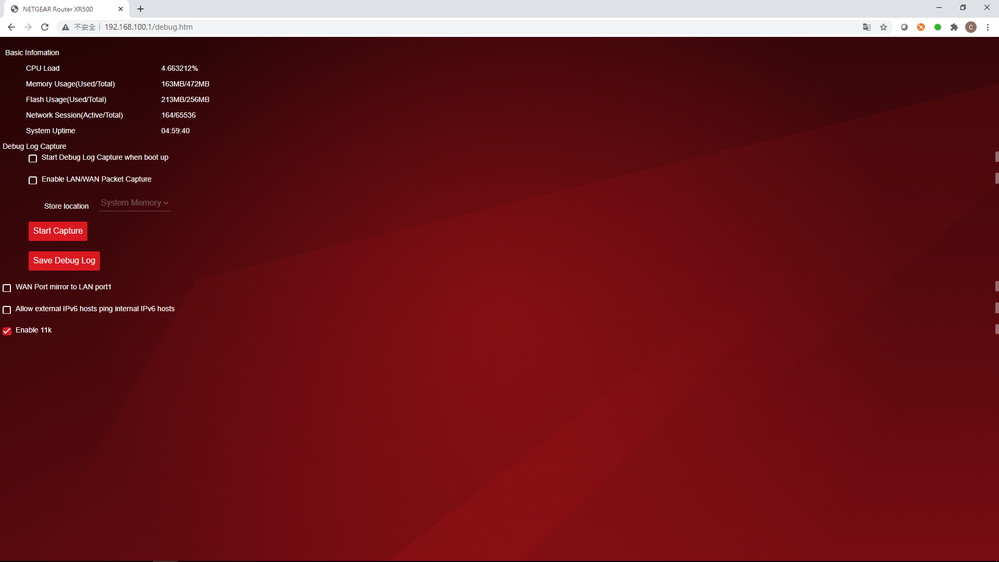 After capturing the logs, please try to disable QoS and see if the issue can be solved?

Simply click the "Disable QoS" in below menu in the picture. 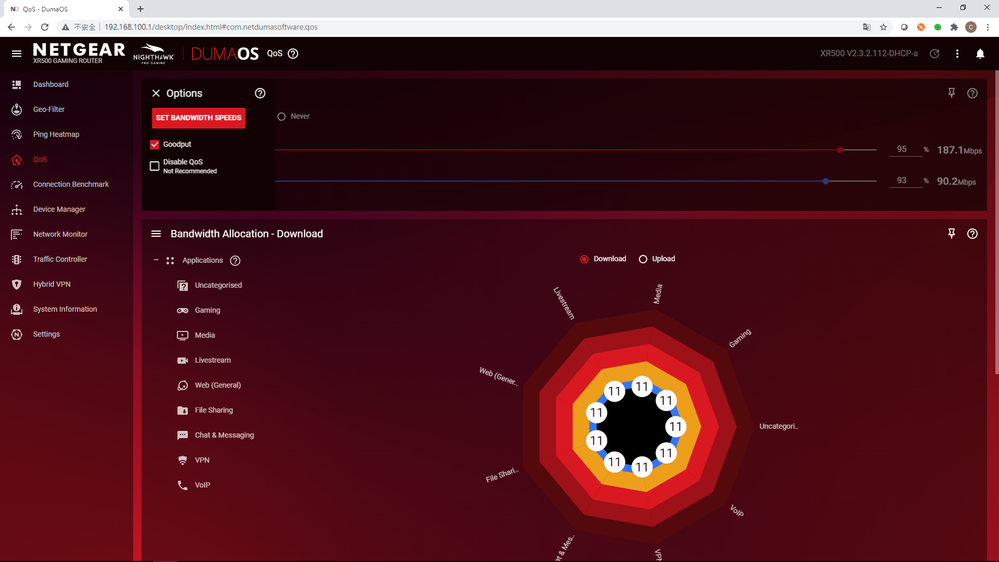 As I said before, QoS is already disabled and has been for months.  Should I turn it on instead?

Apparently there are two debug pages on the router which is why I missed the capture the first time (see attached screenshot).  I'll start the capture now, but when do you want me to upload it?  After the LAN starts working again?  It's still not reconnecting my LAN devices so I'm going to bed as it's almost 4:30am and I can connect to WiFi at least.

@TimChang I believe @Smiley3303 is referring to the DHCP Lease in LAN Settings which can be adjusted not the WAN lease from the ISP/modem.
@drcheesenipz are all the devices connected directly to the router or behind a switch/AP?
@Baturi basically what Tim has said just above your comment - going to the debug page and starting a capture, then when disconnects happen then save it. Don't worry about it if disconnects are too far apart.
Message 307 of 769
0 Kudos
Reply

I'm getting about 1/3 of my speed (320/940) with the latest beta. Also, poor WiFi performance. I turned off QoS (set at 70%/70%) to see if that was the issue and its still the same. On my phone (iPhone 12 Pro Max), WiFi speed is about 10Mbps down and 1 Mbps up and I'm 30' away. Is it too much to ask for something that does DHCP correct (this is fixed now) and perform the most simple of features (obtain expected speeds)? For a $300 (when purchased at release) item, this is frustrating

@GooniesNvrSayDi did you factory reset after upgrading as recommended? Are you using Smart Connect?
Message 310 of 769
0 Kudos
Reply

@Netduma-Fraser wrote:
@drcheesenipzare all the devices connected directly to the router or behind a switch/AP?

no, they are not. Got a Roku 4, a desktop, and a Xbox One (2013 model) hooked up to the ethernet lan ports on the back of the XR500. The connection is live on all of them, but they don't always show up as "online" in the device manager. A reboot alway remedies it, but only for a short while before they are being shown "Offline" despite being in use and online. I don't know what vendor Roku 4 and Xbox one uses for their NICs, but the desktop is a Realtek NIC.

@Netduma-Fraser did another factor reset and disabled the Congestion Control (I missed this) and speeds are back to expected. Thanks for the tip

@drcheesenipz We know it is too quick to change online states so we will sort that, do they switch online if you do a speedtest for example?
@GooniesNvrSayDi great to hear that, you're welcome!
Message 315 of 769
0 Kudos
Reply

@Netduma-Fraser Spoke too soon. Now back down to ~250-300 Mbps without making any changes 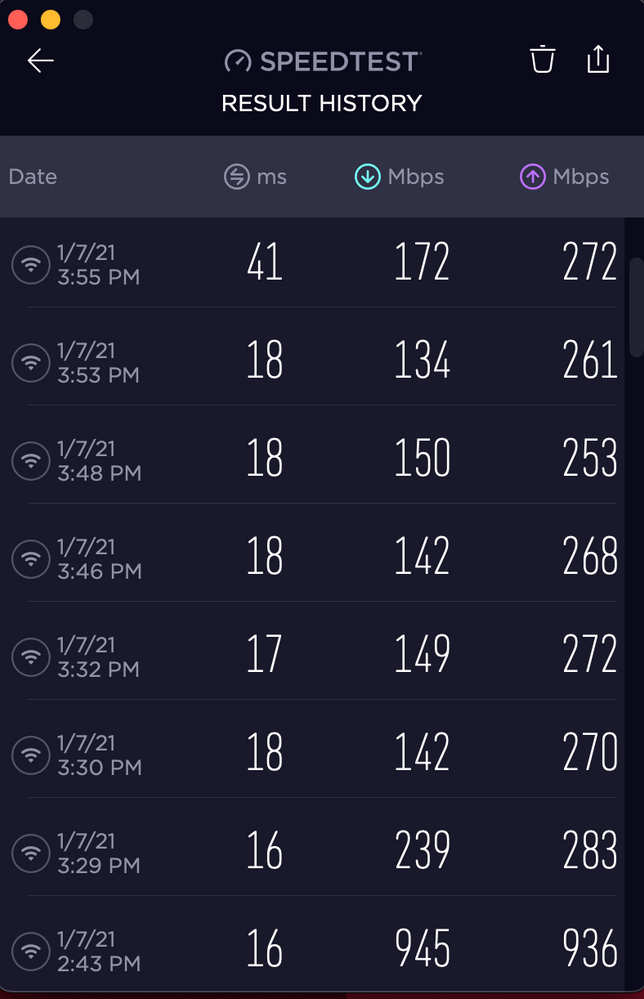 I can't see the picture as it hasn't been moderated. If you connect to your ISP router do the speeds drop? If with QoS disabled the speeds drop that can indicate a potential speed drop upstream.
Message 318 of 769
0 Kudos
Reply

No upstream issues with ISP. They ran an optical check on my fiber line and there were no issues. Their custom speedtest directly to them shows the same poor speeds

@Netduma-Fraser wrote:
@drcheesenipzWe know it is too quick to change online states so we will sort that, do they switch online if you do a speedtest for example?

No, only a reboot of the router remedies it. The devices are getting connection fine though, it is just router's device manager that decides to put them in "Offline" category.

@Smiley3303 Okay I see. Anyway please use this trial firmware to see if you can see the issue again? And please help to follow the steps to get the debug logs for our analysis. Please start the capturing before the lease time expires, and stop after 5 minutes of the lease time. Thanks.

@GooniesNvrSayDi is there any pattern to when the speeds are reduced, such as more devices being used, heavy downloads etc?

@drcheesenipz okay thank you, we will continue to look into that.
Message 322 of 769
0 Kudos
Reply

This version seems to be running alot better than the last although I'm still seeing some issues with stability. I'm consistently achieving my max connection speeds of 1000/50 with Congestion Control set at 90%/80%. I do have IPv6 off and I'm not using Geo-Filter.

The 3 main issues I've noticed are:

- After 2-3 weeks the router has become completely unresponsive until reboot. Some devices are still online but most have no connectivity, local DHCP stops working and the web interface & debug interface are unresponsive. Reboot resolves this.

- WAN DHCP has the occasional issue where it drops and doesn't come back up until a reboot this has happened twice in the last week. Unfortunately both times I couldn't get to the debug page. My XR500 connects back directly to Fibre Termination Device (NBN NTD) and carrier provides static IP via DHCP.

- LAN (Not WiFi) drops off occasionally until reboot I've seen this happen 3 times so far, no pattern. 1 PC with static IP lost all connectivity to the XR500 with WiFi devices still online. Did not check packet capture at this point.

With the debug page, am I able to setup permanent logging to a USB hard drive to try and capture issues? I seem to have not had luck capturing the issues as they occur as the debug page on a couple of occasions has not even been reachable during an issue.

Are you testing the speeds through speedtest.net for example or on Benchmark when you say QoS isn't affecting your speeds? We're looking into the DHCP issues which may also be causing the unresponsiveness. You still need to save the debug log I believe but try with the USB, it might save when it cuts out.
Message 324 of 769
0 Kudos
Reply