Hoping someone might be able to help as I'm currently at my wits end with my router and Netgear! I've seen this problem floating about in several discussions but i've tried everything to remedy the issue but to no avail.

I've got the Nighthawk XR500 Gaming Router currently displaying the problem of the power light blinking. I'm not sure how this has come about however after a quick search on the internet and in the forums it sounds like there is a firmware issue.

Once i had diagnosed it i tried several times to re-install the firmware using the tftp2 method however when i start to flash the drive the blue progress bar gets halfway and says that there is an issue connecting to the server. I'm having to hotspot off of my personal mobile in order to download the firmware files which is less than ideal.

I've contacted Netgear's "support" and spent 45 minutes on the phone re-diagnosing what i already knew to be told that i would have to pay around £100 to get further support even though I've got hardware warranty on the product! Sent a complaint email to them which has been ignored so I'm not sure what else to do with a router i've spent in excess of £250 on other than throw it in the bin...

Hoping someone might be able to point me in the direction of a fix!

many things can go wrong using tftp as well as its sensitive to timing. Sometimes you have to try several times.

are you on windows? if so, follow this guide

just make sure you enable tftp

and here's a video walk through.

and if that doesn't work, you can try using nmrpflash

Good advice above, the windows TFTP method through Command Prompt is what I usually suggest, try that and let us know how you get on.
Message 3 of 11
0 Kudos
Reply

Thanks, will give it another go and let you know if it works!
Message 4 of 11
2 Kudos
Reply

I've tried the Tftp method again however still no joy. It seems to get halfway before saying that its not getting a response from the server. I'm holding down the reset button whilst i power it on and waiting for it to flash 10 times as per the instructions and tried different time intervals but nothing seems to work?

This is where it gets to before it stops. 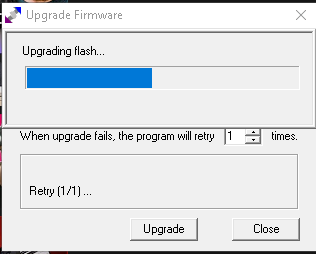 and then this is what i get when it fails 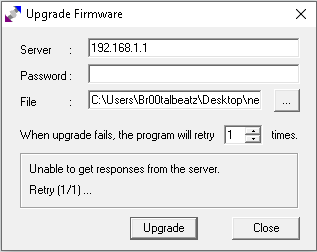 I can't see the images as they haven't been moderated yet, could you upload to imgur and post the link please?
Message 6 of 11
1 Kudo
Reply

I've had luck with that when tftp wouldn't work

I can give it a go. Do you have any references to tutorials on how to use/download nmrpflash at all?

I'd suggest trying the TFTP method through Command Prompt on Windows, that's always what I've used and works every time in my experience.
Message 10 of 11
0 Kudos
Reply

for the most part, tftp has worked well for me. There's been probably 2 occassions where it didn't and nmrpflash did. There's instructions at the site on using it.