Can the RAX200 use Netgear Armor or not?

Both my RAX200 router's firmware and Netgear's useless app have been updated in the end of June 2020 and the only new thing about those updates is that now I am being shown a status of  "Netgear Armor not activated" in the router admin page and being constantly bombarded to get Parental Control software and the godblessed Netgear Armor in the app.

When I bought the router, I knew that Netgear Armor wasn't available for the RAX200 but with the updates and the marketing, I imagined that the updates sorted this issue. I have tried and tried to enable/install via the app by clicking on the new "Security" option but the app only returns an error saying that "Device is offline". I went to BitDefender's page at https://www.bitdefender.com/netgear/ and it doesn't list the RAX200 as a model in which Netgear Armor can be installed.

Can this piece of **** be used with the RAX200 or not? If not, why is the app pushing me to use it when it knows what model I own?

yes it can be used. It was just added and maybe the bitdefender page hasn't bee updated yet.

What modem are you using?

what firmware are you on?

I even ativated and tried it on my rax200 and it worked. But you do have to be logged into your account and not in a double nat.

This is how to activate in the app. I'm not a fan of the app so I usually use the browser.

and here's through the portal

Working here on my RAX200, no issues at all. I activated it through the Nighthawk app.

another workaround is you contact NTGR support team with your SN#.

Thanks for all the replies but none of them work.

Going to armor.netgear.com gets stuck in the loading animation and nothing loads.

What I wrote here is exactly what worte in the Netgear ticket. The support "genius" has advised me to re-flash the firmware:

My name is Suhani, I am your support expert for today. I can understand your concern and I will surely help you with that. Please once re-flash the firmware and then check. To re-flash the firmware, do the following : NOTE : PLEASE RE-FLASH THE FIRMWARE ON A LAPTOP OR COMPUTER HARDWIRED. RE-FLASHING THE FIRMWARE ON SMALL DEVICE LIKE TABLET OR PHONE MAY CAUSE ISSUES AND ERRORS 1. Connect a computer or laptop hard wired to the router. 2. Open an internet browser and in the address bar type www.netgear.com/support/ 3. On the page you would see a purple dialogue box saying "Welcome to NETGEAR Support Let's get started. Selecting your model allows us to tailor our support site for you." 4. Enter the router model number. 5. The page will take you to the router's support options page 6. Click the blue "Downloads" button" 7. The page would scroll down automatically (scroll down manually if it doesn't) 8. You would find grey box saying "Current Versions" 9. Click Firmware Version. It will show a blue "download" button. 10. Click to download it. 11. Extract the downloaded firmware file. 12. Open an internet browser and in the address bar, type ROUTERLOGIN.NET if the page does not show up, then in the address bar type 192.168.0.1 or 192.168.1.1 13. If the page asks you to login, the username is admin (lower case). Password is the one that you might have created during the initial setup of the router If it does not accept the password then the default password is password(lower case). 14. Once you are logged in, at the top there is BASIC and ADVANCED, click ADVANCED. 15. On the left side there are few tabs, click ADMINISTRATION then click ROUTER/ FIRMWARE UPDATE. 16. On the Router/ Firmware Update page there is an option at the top that says "Locate and select the upgrade file on your hard disk.". 17. Click "browse" button and upload the .chk or .img file from the extracted folder. 18. After the firmware uploads completely, turn off the router and turn it on after 10 sceonds. 19. Log back to ROUTERLOGIN.NET again and check if the issue is resolved.​

There is no effing way, I will re-flash the firmware just to see whether it works or not.

Why is it so difficult to re-flash the firmware? if you're worried about the router settings, simply create a backup settings file and load that up after re-flashing. Should take less than 10 mins.

The question asked to Netgear customer support still is: Can the RAX200 use Netgear Armor or not? And the moron answering my ticket can't still give me an official "yes" or "no".

Although I appreciate the community responses, as someone who had a Netgear Router bricked because an idiot in Netgear's customer support sent me a download link to the American version of the firmware a few years ago and due to a thing, that I don't know if you heard, called Covid-19, everyone in my household (two professional working adults and school-age children) are dependent on a functioning router to keep our jobs and keep up with school. I would get a refund and a compensation for being misled, as I did the first time, but it would take months and going down now would be terrible for our household. That is why it is "so" difficult, @psychopomp123 , some of us are not just using our routers to scour the web for pre-op'ed breasted-men videos.

So excuse me, if this time I am a bit suspicious to follow instructions from a Netgear "expert" who 1) can't answer simple questions (CAN. THE. RAX200. USE. NETGEAR. ARMOR. OR. NOT?), 2) writes English sentences such as "please once re-flash...",  3) copies and pastes answers from a canned support script with typos such as "turn it on after 10 sceonds", 4) advises me to call an American number for additional support when both my profile and the product registration clearly state UK as the country of support, 5) advises as the first course of action to perform an operation that is risky and which they claim no responsibility if anything goes wrong and 6) represents a company that rolls out a feature, bomb-markets it and doesn't even update their own effing pages to avoid tickets such as mine in the first place.

At the moment, given the evidence and the quality of the support, I am not even sure if I am talking to a real Netgear person or a man-in-the-browser scammer. That is why @psychopomp123 , it is "soooooooo" difficult to trust that re-flashing my router is a good idea.

Nevertheless, your patronising set something lose in me and I got another RAX200 from Amazon, set up an alternative network and proceeded to test the firmware upgrade which ended up with the same problem, even when we used the app from a different phone . Then we re-flashed the firmware. Yes, it didn't brick the RAX200 I am returning to Amazon this afternoon but it didn't solve the problem.

I went one further, and I re-flashed my own RAX200 firmware and it didn't brick it but it didn't solve the problem either, except wasting my time, the app still says that the "Device is offline".

I contacted BitDefender's customer service and although the fella who supported me couldn't confirm RAX200's official  compatibility, he helped me with the very second hurdle to troubleshoot the problem and now I am able to login and see the empty admin area in armor.netgear.com.  But not before dropping the RAX200 I got yesterday for return to Amazon with reason of "product features advertised not operational, customer support can't solve the problem".

Well here's the clear proof that its working on my RAX200, I've got no idea why you can't get it working on yours: 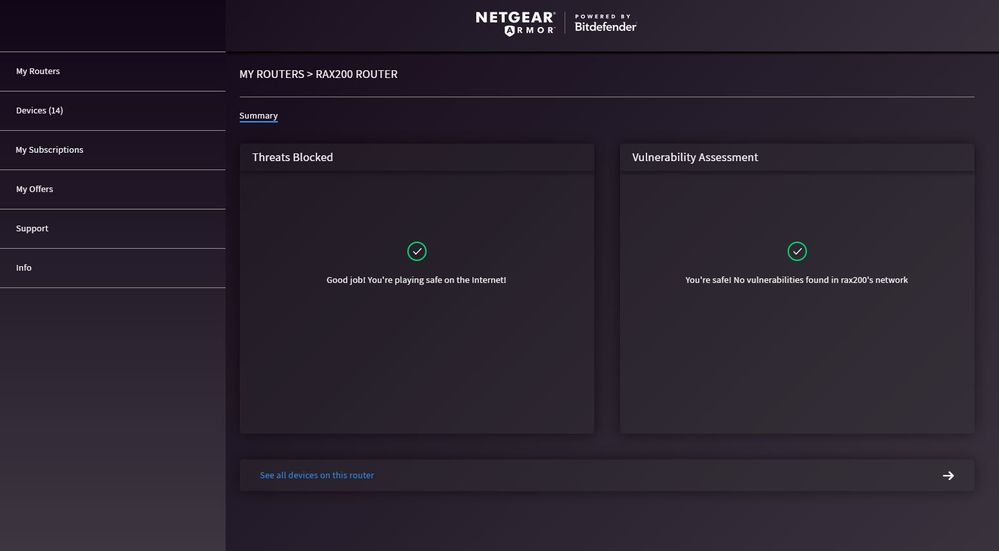 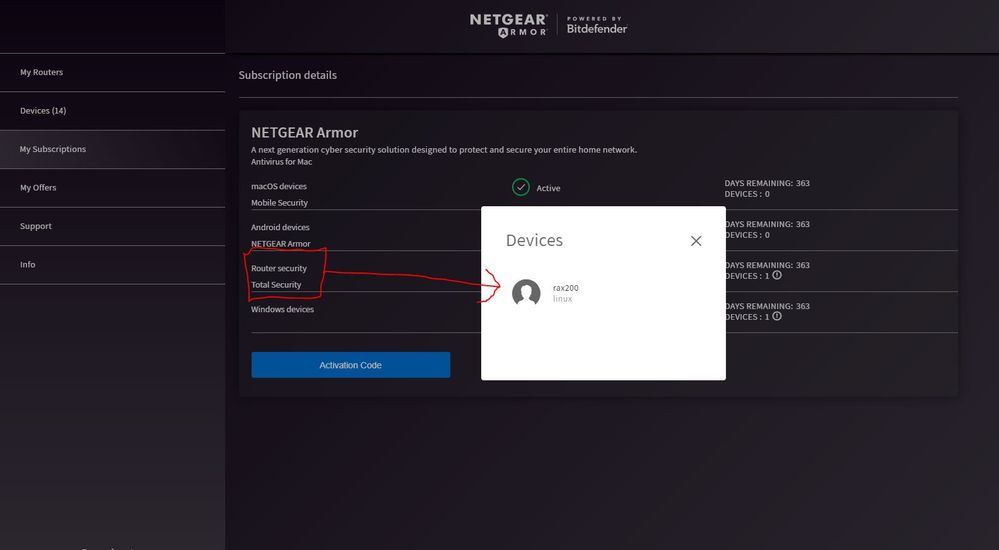 Yes, @plemans confirmed that it can work on a RAX200, two days ago.

I wasn't requesting proof of anything, I just need someone in Netgear to say, yes Netgear Armor is officially compatible with the RAX200 so that I can go back to BitDefender which I have been a customer for a few years now and which are the ones who actually created and maintain Netgear Defender and ask them  to try to sort things on their side.

As it stands, the person I talked to in BitDefender didn't know and when he checked,  he looked into the same official pages I did and what he saw was that the RAX200 is not in the list of supported routers. And that was the end of the call. In the meantime, the imbecile in the Netgear Customer support still hasn't replied and here you go again repeating the obvious and waving proofs of this and that as if either I am to blame for the issue or that I am making a fuzz for something that nobody is having trouble with.

Would you mind staying quet and trying not to patronise me anymore?  All I needed to know from the community has already been provided by people far better ranked and educated than you in the previous posts. What I need is someone that clearly is not an "expert" in anything Netgear-related to say yes or no. Perhaps you could make yourself useful by opening a ticket yourself and asking but quite frankly, I really wish you just shut up, kid.

Dude no need to be disrespectful. You're asking

The answer to that is a clear "yes" since others incl myself are running Armor on our RAX200 without any issues.