I have a set of MR60 MS60 router/satellites.  I noticed that when I plugged them in and set them up, the satellites CONSTANTLY connect to netgear.com, once every second.  This is spamming the hell out of my network and internet connection.

I ended up blocking it via PiHole (my router/adblocker, I only use the MS's in AP mode)  Is there any way to shut off this behavior.  Yes, I know I wont be able to use the little phone app.  No, there is absoloutely nothing that connecting to the server once every second is worth having.  I just want it to stop phoning home. 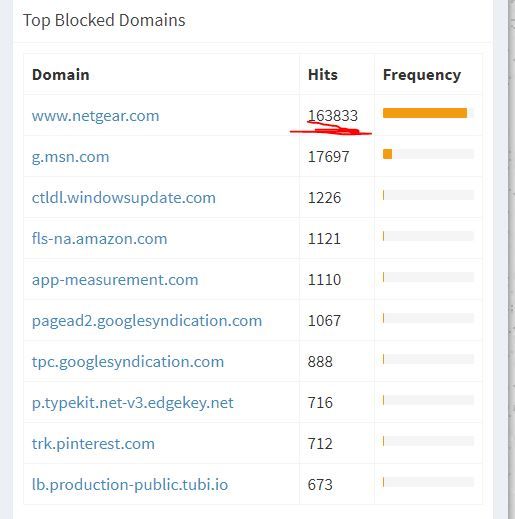 Would you mind letting us know what firmware version your system is currently on?

It is not much of a connection to that server, instead it is simply pinging the netgear servers for what seems to just be to the internet status light and status on the web UI. Though it does seem that that model pings the servers too often.

For determining a fuly functional internet connection, it is a balancing act where the the response time of the status display is based on how often it pings. Beyond that, I also wonder if it attempts to ping more often if it can't determine if the connection is good or not.

In the web UI there is no direct option to disable it, but it can be bypassed via a LAN to LAN connection with the DHCP server disabled (if you are using them as AP and not a main router) , mainly since the pings are run through the WAN port.

Aside from that until they release an opdate to reduce how often pings, the only other option I can think of is if there is a way to get telnet/ CLI access, to stop the running process that is responsible for detemining the internet status, though with many of the newer routers, it seems like the old methods to enable telnet are not working on the newer devices.