I just did a factory reset of a newly acquired used R7000P Nighhawk Router. I went through the steps & the setup windows indicated that the Firmware installed was V1.3.1.64_10.1.36 & that this was the latest version. Then I got online to read up on the firmware & on Netgear webpage for this router found out the current version for download is 1.3.3.140. In the suporting articles, I found the 1.3.3.140 as well as another version 1.3.2.134. So which is which? Do I or don't have the latest firmware & if not, which one should I download?

As a side note, I tried looking for a history of firmware versions to see the features, dates of release, relevance, but couldn't find any such information.

On https://www.netgear.com/support/product/R7000P.aspx#download below of the "Current Versions" for firmware, Apps, and utilities, there is a "View previous versions" control whihc does show-up all earlier released versions. Expanding each entry does give access to the Release Notes. 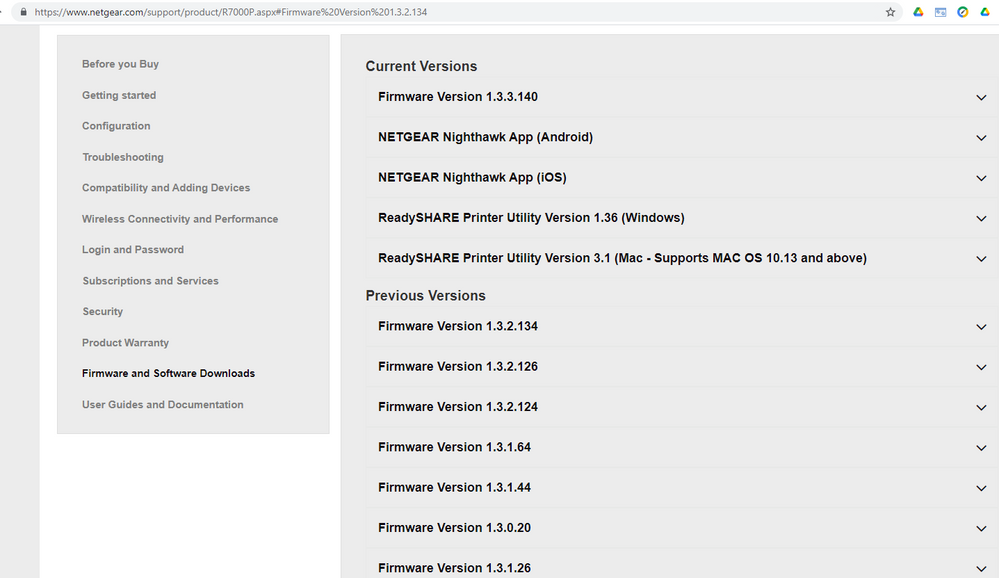 Thanks for pointing out the firmware history location. But I am still perplexed as to why the Routerlogin.net tells me I have the latest firmware & it won't update, whereas the Netgear webpage for the same product says there is a much newer version. And more, why is this not even addessed anywhere in Netgear's information provided.


But I am still perplexed as to why the Routerlogin.net tells me I have the latest firmware & it won't update, whereas the Netgear webpage for the same product says there is a much newer version.

The update process has various channels.

It starts off with a beta process so that they can debug new firmware. (Some believe that they don't put enough effort into that.) Sometimes, if there is a significant issue that needs fixing,  they decide that at this stage they will let the beta version out to the wider world. This is something called a hotfix. That goes up on the support pages bit will never appear in the "live" alerts.

If the hotfix doesn't happen, then the thing ends up as an official release of new firmware.

This usually appears first on the support pages. That's probably because a small bunch of nerds keeps an eye on those releases in the lookout for new things that might fix and problems they see. When something turns up there, the "bleeding edge" brigade is free to download and install the new version, The good thing about that route is that you have to know what you are doing to make it happen. So you should be able to bail yourself out if it goes wrong.

The last route out is the update server. Then your router, or your preferred app, will tell  you about a new release and offer you the chance to update the thing.

There is one more wrinkle in the process, some routers have an "autoupdate" feature that goes and gets, and installs new firmware overnight. You may not even know that it has happened. Experienced users don't trust that route and disable autoupdate where possible.

They don't even allow the on-board update to do its thing. They like to control their own fate and update their firmware manually. And they will never update firmware over wifi.

Whether the reason is incompetence or laziness, the result is the
same.  To compensate for (some of) Netgear's firmware distribution
deficiencies...

Visit http://netgear.com/support , put in your model number, and look
for Downloads.  (For older versions, under Firmware and Software
Downloads, look for "View Previous Versions".)  Find the kit(s).
Download the kit(s) you want.  Read the "Release Notes" file for
instructions.  (In the User Manual, look for "firmware", and,
especially, for a topic like "Manually Upload Firmware to the Router".)
When that fails because of a deficient User Manual, try: