I have spent the last 3 hours trying to figure out how to fix my wifi router. We went to watch a movie, it wasn't loading great, went to the netgear app and saw an upgrade was available. Started the upgrade (at this point the internet went out, I think thats normal during an update though?) and then it said upgrade failed, hit it again same thing. Gave it a minute and tried again, same issue. After several minutes of hoping it would fix itself I noticed the power button was flashing white so I unplugged it, plugged it back in and its still flashing white. No internet connection.

So I hit the internet to see how to fix it and I've tried everything I found. I tried all of the combinations of resetting it (Hold the reset button, power down, keep holding, power up, keep holding and then let go, turn off, hold reset, turn on and let go, just hitting reset etc.) and nothing seems to help. I do get different combinations of flashing lights though if I am holding reset as it powers up, I get the 1 2 3 4 lights all lit up and then it switches to some lights at the top all lit up and then the power light is orange and it repeats until I let go of reset, then it eventually just goes back to flashing white.

So I've been trying to update the firmware using the tftp methods. I have the wifi router plugged in and I connect an ethernet from the router to the computer (after dowloading the software/updates by connecting my computer directly to the modem). I tried downloading one and then I tried using the one on windows (after enabling the option). I followed the steps to set the static IP address and gateway to 192.168.1.1, disable the wireless and go to the command app and this is what happens:

On the software I downloaded it says "erasing flash, may take a long time please wait" but the loading bar never moves and then after it retries 3 times it says "Unable to get responses from the server"

I've tried downloading a couple of the previous updates like version .66 and .58 but those are giving me the same response.

If anyone is able to help me with these issues please let me know! This router is just over a year old and was expensive and working great until this update issue. I've tried to give as much detail as I could but plese let me know if you need more. For reference I'll put links to some of the videos/websites who's suggestions I've followed.

Many people around here might advise you to shun any Netgear-supplied
app, and use a computer with a wired connection when doing a firmware
update.

The TFTP recovery scheme is a multi-step procedure which offers
multiple opportunities for user input, hence user error.  By itself,
saying that you "tried" it doesn't say much.  As usual, showing actual
actions (commands) with their actual results (error messages, LED
indicators, ...) can be more helpful than vague descriptions or
interpretations.  Especially when using a command-line program,
copy+paste is your friend.

Again, a little vague, but seem to have fetched a proper R8000 kit,
and you might have extracted its contents onto your Desktop.

Ok.  I prefer that Windows built-in command-line TFTP client program
to any third-party program which you'd need to download.

I'd avoid it.  If for no other reason, the built-in command-line TFTP
client program tends to provide better error messages.

Regarding "not able", see "As usual, [...]", above.  Specifying a
wrong address (anyplace) could account for that, too.

You seem to be headed in the right general direction, but with a few
deviations from the true path.  Reread, retry.  What could go wrong?

Thanks for the reply @antinode! I didn't know that its not recommended to use the App, I definitely wont do that in the future. I'm not very good at software/firmware stuff. By not very good I mean I don't know anything about it haha. I spent 3 hours last night researching and trying everything I came across. I've never "pinged" anything, used the command screen, done anything with the IP address or even heard of gateway address. So I apologize if my descriptions arent what you needed. If you're willing/able to help just let me know what you need and I'll supply it.

Sorry to be vague on the TFTP part, I did add a link to the bottom to the two different things I tried, I hope that helped. When you say showing actual commands, do you mean photos of the command screen? I can do that, I did copy and past one of the message I got. I got several as I tried about 15 different times. Next time I'll show them all. I did actually catch that .chk mistake and fixed that.

Can you help me understand what you mean by by the computers IP address vs the routers? I'm at work on my ipad, not the computer so I can't remember exactly(or show pictures at this time) what all the labels were but what I can remember is I went to settings, internet, Ethernet, properties, the something 4 protocol (or something like that), properties, and saw 3 places to put xxx.xxx.xxx.x. In the top one I tried 192.168.1.1 and I also tried 192.268.0.1 in the top spot. The middle spot defaulted to 255.255.255.x (cant remember that last number) and in the bottom I put the same as the top. Are you saying that I need to put 192.168.1.10 on top and 192.168.1.1 in the bottom? If so, which do I type into the command screen?

Also, when it says "desktop" does that mean I need to pin it to the desktop? It was in my downloads folder, could that have been the issue?

Thanks for all your feedback! I'll definitely be trying again tonight when I get home.

Yup.  The top one is the address of the computer's Ethernet
interface.  The bottom one is its gateway address.  (That would normally
be the router's LAN address, but, in its current crippled condition, the
router can't do any routing, anyway, so that one matters little.)

Pretty much what that Netgear KB article says (adjusted for your file
name), the router's (default) address:

> Also, when it says "desktop" does that mean I need to pin it to the
> desktop? It was in my downloads folder, could that have been the issue?

That (among other things) would also have caused a "can't read"
error.

You don't need to "pin" anything, but you probably want to _place_ it
there.

Then, you apparently gave it a CD command like:

which changed its current directory ("CD" -- get it?), and it adjusted
its prompt accordingly:

So, when you then gave the TFTP program a simple (relative) file name
("R8000-V1.0.4.68_10.1.75.chk"), it would look for that file in its
current directory.  That'd be fine, if you put that file on your
Desktop.  If you put it into your Downloads folder
("C:\Users\Jessica\Downloads"), then you'd want to tell the Command
Prompt shell to use _that_ as is current directory.  For example:

As usual, many things are possible.  You might, for example, specify
a complete (absolute) path to the file in the TFTP command, and such a
command would work regardless of the shell's current directory:

Using the CD command allows you to get a head start
("C:\Users\Jessica"), and to specify the rest of the path to the
directory in a bite-sized piece, making the ultimate TFTP command easier
to type.

> Can you help me understand what you mean by by the computers IP
> address vs the routers? [...]

Every gizmo (computer, router, ...) on your network has an IP
address.  It's analogous to a telephone number.  If you want to push a
firmware image file to your router, then you need to specify the
router's address, not your own (your computer's).

In order to communicate with the router, the Ethernet interface of
your computer needs a similar but different address (like
"192.168.1.10").

Your ISP normally deals with your router's WAN/Internet interface,
exclusively, because it must be compatible with their stuff, and you
can't be trusted.  For this TFTP stuff, the router's too crippled to do
anything with its WAN/Internet side, anyway.

Okay @antinode, I fixed the IP addresses like you suggested, putting .10 in the IP address and .1 in the gateway. I also fixed the command prompt input to downloads and copy and pasted the file name. Now it’s at least thinking about doing something for a minute, but it’s telling me now “connect request failed.” I tried several times. Once just turning it off for 10 seconds and then back on. Once after holding the reset button down and releasing it without cutting power. Once after cutting power, holding down reset, turning it back on while holding reset down, continuing to hold reset for 10-15 seconds and then letting go. Doing that last restart method provides different results with the lights on the router. Any of the other restart methods just resulted in the power light being orange for about 20-30 seconds and then starting to blink white. Continuing to hold reset down after turning the power back on causes a series of lights. First just the orange power light for a few seconds, then the bottom lights labeled 1-4 would light up, followed by all of the lights on the router lighting up, then the first and 3-7th and then just the amber power light again. It continues to cycle like this for as long as I hold the reset button. Once I release it it goes back to the solid amber power for 20-30 seconds and then to the flashing white power again. I put pictures below to make that easier to understand

Pleaser let me know if you have any more feedback! I still haven’t figured out how to make this work.
Message 6 of 9
0 Kudos
Reply

I’m trying to add the photos, but my cell service is horrible and I obviously don’t have any WiFi. I’m also using my iPhone and it’s saying the photo formatting isn’t right. I’ll keep trying
Message 7 of 9
0 Kudos
Reply 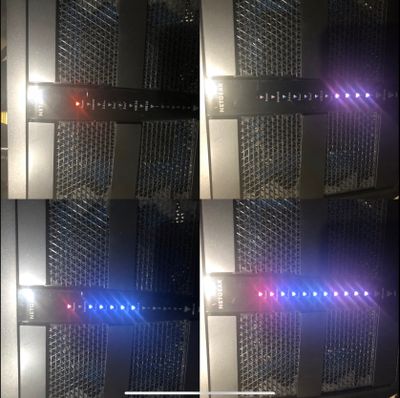 @antinode Here are the images I couldn't upload yesterday. Let me know if these help or if I should take photos of something else 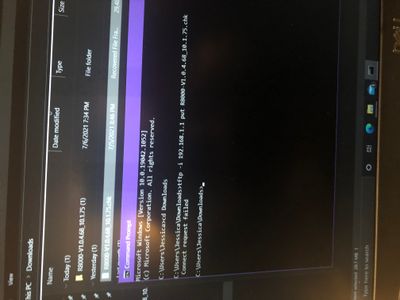 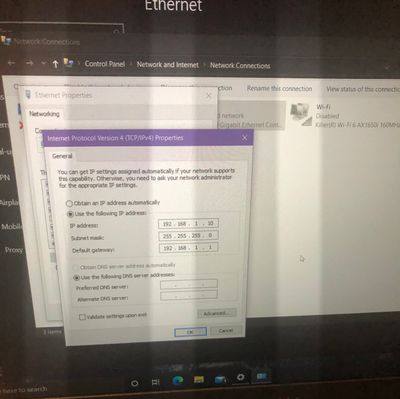 @antinode Sorry I think the other photos weren't compatible. I hope this works