Netgear quality - when will it change?

This is an open note to all users of this forum in general and in particular to the prime movers on the forum. They know who they are.


Through this thread, please can we collectively demand that Netgear get their act together and address the many and not insignificant issues with almost every recent SOHO product and that they urgently focus their resources on this activity for products released in the last 18-24 months before releasing any more products?

Can we also demand that in future that Netgear properly develop AND test products BEFORE they are released to market and that in the event that a device does not work as intended / specified that Netgear RAPIDLY prioritise / address / fix / test and roll out the fixes to users and that this is done irrrespective of the inappropriate 90 days suppport / warranty constraints Netgear put up simply to limit liability for the mess they are creating.

I think that that this approach is in the best interests of all parties and not just the shareholders, employees, suppliers but also for us long suffering loyal customers. I would hope but am not convinced that senior management at Netgear would want the same thing? Nokia failed to address functional and support issues with its products and that inevitably contributed to its demise. I for one would not want Netgear to follow the same path.

Warm wishes for 2015
Bandolier aka Martyn
Message 1 of 17
Labels:
Me too
0 Kudos
Reply

Hello, and honestly, I wouldn't hold my breath.. :rolleyes:

Corporate structure is one thing - profit is another - shareholders are on top - and users at the very bottom..

this seems silly to me ... what are the consequences of the "demand"? Netgear seems to have a LOT of satisfied customers.
1xRBR50 1xRBS50 2xRBS40
Message 3 of 17
0 Kudos
Reply

This is totally inconsequential.
Message 4 of 17
0 Kudos
Reply

My recent experience with the R7000 leads me to conclude that Netgear finds iiself between a rock and a hard place.

Many purchasers of the R7000 had, essentially, NO PROBLEMS, while others suffered through many firmware updates without having their problems resolved.

Firmware problems seem to fall into three broad categories, drivers provided by the chip maker, code produced by Netgear or its Contractors and the system architecture that integrates these.

It appears that there is a serious flaw in the system architecture of the R7000 Firmware that prevents the reliable loading of saved settings after a Firmware Update. There also seems to be an architecture problem that causes unpredictable operation if a Firmware Update is preformed without a Factory Reset prior to the update.

What should Netgear do now and in the future?

Since it is unlikely that the flawed basic architecture of the R7000 can/will be corrected, Netgear needs to eliminate the option to save and restore settings and force a Factory Reset as part of the Firmware update process. The Firmware update needs a dialog box warning that Settings will be lost and need to be written down so they can be reentered after the update.

In the future, Netgear needs to improve Firmware Quality Control prior to product release. The current state of both quality control and technical support does not give me warm and fuzzy feelings about the long term prospects for Netgear's survival.

I used to be a great fan of Linksys products. Cisco brought Linksys and quality and reliability declined rapidly. I no longer look at or use Linksys products and moved to Netgear several years ago. One more experience like the R7000 and I will be forced to move my business elsewhere.
Message 5 of 17
0 Kudos
Reply

Hi, As long as sales people dictate instead of engineers, nothing will change. Not only at Netgear, every where else. I just get by whatever I have being a retired engineer.
Message 6 of 17
0 Kudos
Reply

It's not silly if the customer drops $299.95 on a TriBandRouter.. Only to find out that it does not function as it should. Add to that options that are supposed to be enabled - are not. Other options are missing.. and the list goes on.

Now, this does not only apply to Netgear, but to all companies that rush products to market. So the guy is just angry and venting some steam - totally understandable.

Hmm,
Remind me of "Don't bite more than you can chew"? , LOL! Don't rush out to buy brand new any thing Spend your money wisely.
Message 8 of 17
0 Kudos
Reply

I do not wish to be drawn on whether the demand is silly, or not, however, I will say that yes, there are many satisfied Netgear customers out there but that there are also customers who have in one sense been taken for a bit of a ride. I have been on both sides over the last 10 years or so but I want to bring the focus back onto the product and the need to deliver on the promises of the product - to deliver quality straight out of the box!.

I do not want to spend my time getting angry with anyone or indeed spend hours searching for solutions or moral support on the internet. I want products that exceed our expectations or at least do what they claim and I want them to continue working for a reasonable period of time and be supported so that users get a return on their hard earned tech spend.

Please forget any blame game, whether one or other of the engineering groups, sales, marketing or senior management are particularly at fault. Netgear can work that out. All I can say is that the SOHO solutions are being developed and released through a process which is not really fit for purpose and it is long overdue for a change.

That said the Netgear forums do help and have heled me a lot over the years!

I am one of those who bought the R7000 back on March 10 2014 and had and still have many problems with thought put, drops, and usb3 problems. Since I installed it. Even Netgear replacing the router with another r7000 I am in my 3rd support case and now almost 6 months and 30 pages of case reports I still have the same problems with many beta firmware changes (and dealing with having to step though firmware change process like was explain about) The case is still open in engineering. I have been a very long time Netgear user and am retired from IBM, been in the networking side of it since Arpanet days and built my first computer in the late 60's. If things don't change at Netgear soon I also will have to move to another manufacturer for my network. The main problem is that the router can not handle the though put I have. My fiber Optic connection is 20+ down and 5+ up in front of the router and on the backend of the router its more like 8-10 down and 4 up. Lots of noise and what if feel is cpu and memory bound within the router.
:cool::rolleyes:
Rich

Netgear user for over 20 years

I don't have an r7000 but feel your pain. My approach to routers is to buy them from a retailer that will allow returns in 30 days. If it doesn't work it goes back.

If there is a subsequent improvement, say new version or firmware, I may try it again. Same thing, if it doesn't work it goes back.

Have you considered DD-WRT? I moved over to DD-WRT on my R7000, been rock solid ever since, no issues and complaints! Now on my R8000, it's another story, but hopefully the DD-WRT team (BS and Kong) will get the new driver and release it to us soon!
Message 12 of 17
0 Kudos
Reply

If possible, can you provide the exact DD-WRT filename/version you had success with?
1xRBR50 1xRBS50 2xRBS40
Message 13 of 17
0 Kudos
Reply

Sure thing! Sorry for the pic, I had to use logmein to access it as I'm at the office.

I've been running Kong's FW 24500M with nvram set wl0_ampdu=off (commit it to nvram after, and reboot) 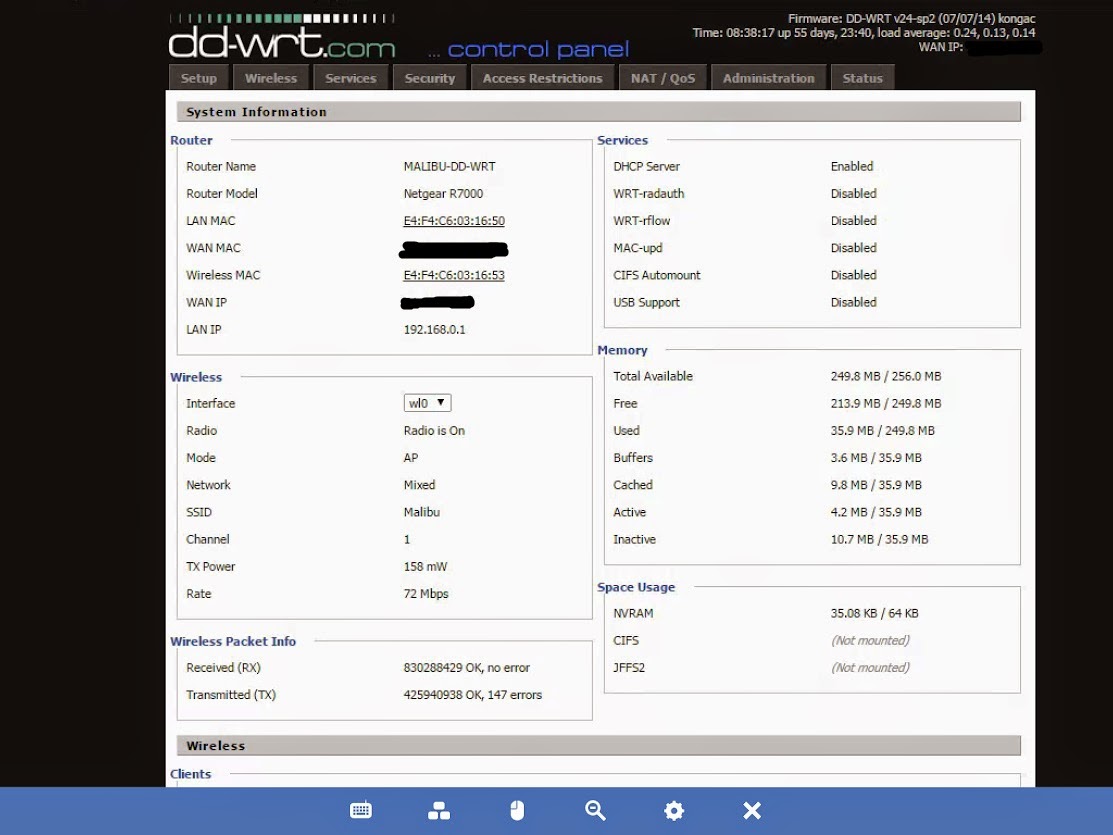 Hi,
For an alternate approach, tried dd-wrt(Kong's f/w)? When I had R7000 that was what I was using. I moved on
now to play with R7500. I am not real heavy user, any router I had, I managed to make it behave, stable and reliable.
Message 15 of 17
0 Kudos
Reply

Thought I might chime in here, after I checked my records (database was down for a couple days, otherwise I'd have mentioned this earlier) What many people fail to realize, is that the people who report 'problems' on the net, are a VAST minority of users... even though, no matter how many times told this, no one seems to grasp this concept. I understand it sucks when you get a bad device (don't get me started on my track record with Asus right now ;), but assuming that just because you and 10-15 other people are in the majority seems silly. People who are happy with their product, generally don't go out to the internet to complain about a properly working product.... although, you do occasionally get the 'fan groups' that appear. Anyhow.. I've checked my deployment database, and right now.. I have installed 46 separate installs of R7000s. Of those, I've had 1 dead out of the box, 1 die a few weeks after install, and 2 that acted a bit 'screwy', and were replaced. The 2 oddball units were taken care of by Netgear's Warranty, and the other 2 were replaced by the vendor they were purchased from. So that's a little less than a 10% failure rate.. which, yes, seems a bit high.... but nowhere near a 'majority' of failures. (For the record, I'm batting 0-4 with Asus Laptops... but I understand I'm just getting a cruddy luck of the draw) But guess which router I recommend to homes and small businesses the most still? The R7000. (Even more so since the price has dropped significantly) Now, to add a slight wrinkle to the mix, I DO have more than half of the units installed with DD-WRT on them, due to a few 'features' that aren't enabled on the stock units... and I do recommend that anyone who isn't happy with their current R7000 units (and are past the warranty) install DD-WRT and see if your experience improves.... just be aware the User Interface isn't as simplistic as the stock firmware, and various builds of DD-WRT are more stable than others... so YMMV.
~ Shadowlore
Message 16 of 17
0 Kudos
Reply

Oh.. and just checked.. at 11 installs of R8000 so far. (usually it's been for a specific reason)
~ Shadowlore
Message 17 of 17
0 Kudos
Reply
Top Contributors
See All
Announcements