Unreal they still refuse to correct the IPv6 problems. I am so glad I don't own this router any longer how disappointing.

Since you dont own it how do you know they have not? Netgear were aware of the isuess; "Would like to update that we found the issue was due to ICMPv6 "Destination unreachable was being dropped by router". Our team is looking into it, and will update once having feedback from team.

Firmware is worse. Normal i have speed about 120Mbit down/ 12 Mbit up now only 15down/9 up. Revert back to previeous firmware

Did you try to reset it and re-configure it from scratch?

i already inform support. The betafirmware was better. and normal a reset is not needed.

Since you dont own it how do you know they have not? Netgear were aware of the isuess; "Would like to update that we found the issue was due to ICMPv6 "Destination unreachable was being dropped by router". Our team is looking into it, and will update once having feedback from team.

Becuase i would assume if they had fixed it they would have mentioned it in the change log. Not rocket science ok.

I haven't installed it yet, but does fiddling with the Transmit Power Control help with the link speed?

Netgear mentioning a fix that they only talk about in private posts... your assumption is hardly rocket science either as admitting the firewall is broken would not look great after all this time, but we can live in hope.

As you have been told before a reset is always a good idea and is what most people do to avoid the possibility of odd glitches occuring. Support will probably ask you to do this anyway. I have to say I have not noticed any reduction in speeds, but thats not to say its not happening for some people. It will be intersting to see what they do, or dont do. Considering how long this firmware update took to release I should be surprised, but its netgear and they dont have a great record with good firmware updates.

I was offered a debug FW after I posted my speeds with the limited release. I wasn't able to download it fast enough and the link expired. I use to beta test but I told them several times they shouldn't release with the known issues. I guess I hurt their feelings and it's been almost two years now since the r8000 test completed. I might have to actually spend my own money on a router someday. LOL

Netgear mentioning a fix that they only talk about in private posts... your assumption is hardly rocket science either as admitting the firewall is broken would not look great after all this time, but we can live in hope.

Thats just it. It's not rocket science other router vendors have fixed this issue a  long time ago. Again after over a year netgears implementaion of IPv6 does not work as intended bottom line with real world v6 it's broke. After many people have opened tickets Netgear has sent trial firmware that has promise but yet no release to the public.  Sorry Netgear is way behind the times and it seems they dont even care. It is what it is. Unfixed !!!

Ok, I've installed it. Both wired and wireless throughput are unchanged from 1.0.4.30.  Wireless link speed, initially, was low but after toggling Wi-Fi on my MacBook Pro, it came back up at 1300 Mbps!  That's the first time I ever saw 1300 Mbps.  This is link speed.  Actual throughput is much lower.  I haven't tried fiddling with Transmit Power.

That's the first time I ever saw 1300 Mbps.  This is link speed.  Actual throughput is much lower.  I haven't tried fiddling with Transmit Power.

@ One could guess that the 1300 link was not anything special because you made no mention of throughput improvement, unless they're weren't any. @866.7 I normaly see mid 60Mbps tranfers so what are you seeing?

I have Gigabit service. The variance on the speed tests is a little high, with most wireless download tests clocking in around 550 Mbps but I did see it peak at 639 Mbps.  Upload is quite a bit slower at 125 Mbps.  This is from about 6 feet from the router. 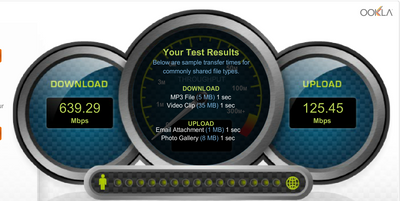 Throughput for 6+ year old PC wired through 100+ ft of Cat 5 and a switch is more symmetric at about 550 Mbps down and up.  I suspect the PC is bottleneck.

Wireless upload speed is a little bit of a concern but it was the same with 1.0.4.30, so my point still stands that performance on 1.0.5.48 is unchanged.

'There are two IPv6 related issue being found after R&D clarification.

For (1), the fix is included since we found it will lead to failuire to access some real sites (not test site).

For (2), we didn't include the resolutin yet; actually, we still not conclude nor decide if it's a bug. The reason is R7000 is running as router instead of a PC in which by natural having stateful firewall.

When there is ICMP request triggered from WAN side, the firewall is block and drop the frame. It's implemented on IPv4, and we keep same implmentation on IPv6. Currently it looks the dropping is lead to some case failure when testing with IPv6 test site (http://test-ipv6.com), and we think it should be maintained base on idea of stateful firewall design.

One proposal from team is to allow ALL ICMPv6 request from WAN port in order to fulfill user's needs, but we concern there might open other security problem which not worthy for just getting high scroes for test site.

Thus, for (2) we still not decided and trying to find real problem might be. Please let me know if you have any idea or sugestions, it will help us to find correct solution for reported cases.'

So if anyone has ideas I suggest getting back to Netgear would be prudent I guess.

So there you are Jim 769 a IPV6 fix was included, but not mentioned...

Thanks for sharing the information. Would have been nice if they posted something about it in the change log..  Jim !!

I have been waiting for a while now for R7000 VPN services to support iOS devices. When I found out that the this firmware version had contained it, I am quite keen in testing it out.

Has anyone tried this new functionality ?

Oh yeah BTW - I have noticed that on the firmware download page. The zip file contains "Change log" files that has been marked as "confidential" it's just embedded in the word document - it's an interesting read of all of the defects that have been resolved.

Thanks for this update. I have a new R7000 attached to the Australian NBN with "skymesh" and It works fine in V6 bridge mode, each device inside the house gets a /64 and I'm rocking on the test-ipv6 score, and more to the point, also accessing real content. But this is kind-of sucky, when I could have the NG get  the /56 from DHCP-PD and use SLAAC inside the home.

When I enable auto or DHCP, I can only use IPv6 when I force MTU inside to 1280. This is a classic sign of pMTU breakage. Its also clear that traceroute and icmp6 is not working for debug. BTW Skymesh assure me the outer VLAN shroud on my fibre overlay (the NBN is a layer-2 open carrier fibre to the home model, and the ISP has layer 3 above) is a 2000 byte MTU, and their core network is jumbogram. The problem is pretty obviously not happening inside the ISP. Its the flows in the real world which are being blocked. Remember, because of the V6 architecture, there is only host-host fragmentation: no intermediate reassembly is possible. So we really depend on ICMPv6 being allowed to work.

I can understand Netgear engineers want default to be protected, but PLEASE can we have a control switch to own our own fate, and enable ICMPv6 passthrough?

I assure you, it is not just 'test-ipv6' which is broken. A lot more is broken, in the current situation. The evidence (pass through works) is very strong.

Yes, tested and use it till now for remote access via VPN on my Android smartphone and on a PC's.

Didn't work for me :-( back on bridge-mode working fine. so the code works in normal v4 usage, but hasn't fixed IPv6 on the NBN with this provider.

I checked MTU 1280. didn't fix the problem. So whatever is going on, its more complex than just ICMPv6.

NDP and SLAAC can represent a significant security risk in IPv6. IPSec, which is mandated by the IPv6 specifications. Without IPSec protection, each of these ICMP messages is easily spoofable (similar to ARP spoofing in IPv4). This leaves NDP and SLAAC open to various attacks, such as the following; An attacker can claim to be another host’s address using Neighbour Solicitation Messages, an attacker can also claim to be the default router using Router Advertisement Messages, as well an attacker can claim all addresses using Neighbour Solicitation Messages, preventing hosts from getting an address and an attacker can advertise false prefixes using router advertisement messages.

Netgear need to strike a balance for the consumer that want  to use the R7000 without having to configure a ton of stuff that may put them at risk. So maybe as you say a switch under IPV6 settings to allow ICMPv6 passthough which is by default is set to 'Filter' would be a good idea. Although I'm sure Netgear R&D should have a better grasp of this for the consumer base they are aiming their routers at. After all there are third party firmwares you can use that give you greater functionality if you want it.

This is the second ISP in Australia I've been on with IPv6, the other was ADSL2+ and my billion router worked fine. You seem to be leaping to defend Netgear over a supposed issue of ICMPv6 filtering, and I understand contextually why given people like me think that MAY be part of why its bust: but the bottom line is, its simply non-functional. The IPv6 "knob" succeeds in getting an outside IPv6 binding and serves SLAAC on the inside, but doesn't forward packets. Read that again: DOESN"T FORWARD PACKETS. I'm not emitting a reliable two-way IPv6 packetflow. In my books, thats not working. Networks generally have to both send and receive. I've got either one, or neither, but not both. Remember: in bridged mode, they flow. Its not because the V6 pixies are on strike: the active IPv6 forwarding mechanisms inside the Netgear engine JUST DONT WORK

You can chose to call this customer protecting behaviour against the thread of ND spoofing and malicious IPv6 attacks. I call it broken.