× We are experiencing an outage of our ReadyCloud service and are working to resolve the issue..
× Webinar: WiFi for EdTech with Insight Advanced Wireless 1/22 11AM PST

Welcome to the NETGEAR Routers Community

I've been running 1.0.9.30 for what seems like a year without major issues. I understand 1.0.9.60 is the latest firmware version but from the forum it appears there are problems with that build. It seems 1.0.9.42 is stable from the community reports.

Does .42 offer any meaningful benefit over .30? Thoughts concerning upgrading to .42 or another build or just stick with .30?

Thanks in advance for the advice. 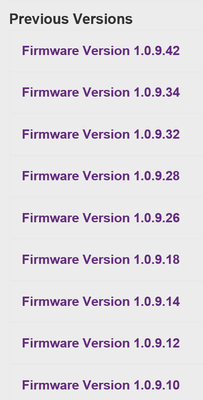 save yourself the headache and run DD-WRT


Does .42 offer any meaningful benefit over .30? Thoughts concerning upgrading to .42 or another build or just stick with .30?

The usual reason for people wanting to upgrade is the "security update" bit.

But these security fixes are sometimes for things that apply in rare circumstances and that are rarely seen in the real world.

You could just try the new firmware. If you are one of the majority who have no problems – they don't turn up here – fine. If there are problems, even after you do the factory reset thing – don't do that if all works well – you can roll back to what you have now.

If you are going to update the firmware, experienced users prefer the manual approach. Less liable to fall over.

All of what @michaelkenward is true.

I didn't have .30 so I cannot compare the fixes, features, enhancements or what might have "broke".

I had good luck with .26.  I skipped through .30~.34 because I wasn't using VPN.  The change from OpenVPN cert update (from MD5 to SHA256) was the most important  feature offered as I recall.  I believe .32 was best for VPN users...  I think is partially broke again in .34 and was addressed in .42.  This is where I finally landed.  However, my R7000 is now on our boat and won't be used again until May, so I'm sure something newer will be available by then.

One you have a router working like you want, (stable and reliable) make a back up of its configuraton.  At that point, I ignore incremental updates, and only update again when something meaningful is released.

The back up however, does give you the ability to experiment and test other FW versions.  Upgrade, reset and test.  You can fully evaluate another release.  If its unreliable or doesn't meet your needs, downgrade and apply your saved .cfg.  Now you are back to what worked.

Its not wise to use saved configs between different FW versions.  (Has been said hundreds of times previously).  It can work some of the time, but more times that not, problems or unexplainable behavior is introduced.  Therefore I only apply a saved config to the same FW it was created from.  I have been using this method successfully for years.

Thanks for all the excellent input and advice. I just installed .42 and hope it remains stable and offers equal to or better performance than did .30. The tip concerning making a backup .cfg file- just in case reversion to .30 was deemed necessary- was most helpful and the final push needed.

Concerning DD-WRT- I used it years ago on an Asus router and might take a look at it for the R7000.

And please, no admonitions to the contrary - it's my choice.

I noticed this growing enthusiasm at Netgear to force things on us.

First there was the imposition of password recovery on us by default – I turn it off – but even worse than that is adding "auto-update firmware" and turning it on by default.

It should be your call on what passwords you use.

Have you tried changing it to something else and then reverting to the default?

It seems to work. If you do that you will at least be able to benefit from any improvements that updates deliver.

The new firmware won't let you change back to the default password.  I'm back on 1.0.9.42 and will be staying there unless they reverse this decision.