Remember to back up your settings prior to upgrade in case you need to go back, and perform a factory reset if you experience any issues.  I didn't need to do this.

Would also like to point out that there are several vulnerabilities recently made public that affect over 50 Netgear models.

Performed the 1.4.1.50-1.3.10 firmware update on a R7900P through the Nighthawk iOS app -- after the reboot, wasn't able to log in to the router through the Nighthawk app, tried a reboot but would receive "Logon timed out ..."  Problem persisted for two days, then allowed a login.  Logon from a browser works fine.  Next time I'll wait until the update firmware appears as a site download ... it still shows the former firmware at the Netgear site.

As a side note: "Devices" now has more symbols but none included for an NVR nor a Switch.

I get the following error:

Performed the 1.4.1.50-1.3.10 firmware update on a R7900P through the Nighthawk iOS app -- after the reboot, wasn't able to log in to the router through the Nighthawk app, tried a reboot but would receive "Logon timed out ..."  Problem persisted for two days, then allowed a login.  Logon from a browser works fine.  Next time I'll wait until the update firmware appears as a site download ... it still shows the former firmware at the Netgear site.

As a side note: "Devices" now has more symbols but none included for an NVR nor a Switch.

For me attached devices does have more symbols, but the list gets corrupt.  For example, an iPhone shows as "wired" and a physical printer that is wired shows as "5G Wireless".

Different devices seem to get msessed up.

One other issue, I cannot seem to go for more than a few days before DHCP and routing seem to fail on the R8000P.  A power cycle fixes it.  Perhaps some sort of memory leak in this new version?  P.S. I am using Network Armor features incase that has any relevence.

I'm stable.  Device uptime with this FW about 18 days.

How did you upgrade to 1.4.1.50?  I recommend manually from a system connected via ethernet.

Reset the device and see if that helps.

How does one update the firmware manually when Netgear doesn't provide the new firmware as a downloadable file?  Only the prior firmware is available for download.  The issue with the iOS Nighthawk app has not been resolved ... a router reboot provides a temporary solution -- after using the app, one is locked out of login as sample shown on this site.

The auto update took place. I have since reset the router to factory setting and still no access via the nighthawk app.
Message 8 of 17
0 Kudos
Reply

Can you access the router via a browser? Start browser and go to 192.168.1.1. That should get you to the login page of the router. The apps are shaky at best and IMHO should never be used for firmware updates unless you want to have the fun of trying to recover a bricked router. Only safe way is the manual way with a PC/MAC Ethernet attached to the router.

No problem accessing the router, problem is obtaining a downloadable copy of the new firmware without having to downgrade to old firmware so the router sees that there is a new version of firmware to download.  Ridiculous, I have to wait until the new firmware is downloadable from the support page that only shows/provides the old 1.4.1.42 version as current.  Anyone here have a link for the new 1.4.1.50_1.3.10 firmware?

I'm stable.  Device uptime with this FW about 18 days.

How did you upgrade to 1.4.1.50?  I recommend manually from a system connected via ethernet.

Reset the device and see if that helps.

Thanks for the follow-up.  Most recent firmware was updated from a computer using Chrome browser, connected to Port #2 of the switch.

Did a factory reset before (using the Erase option through the web Gui).  Did the 30-second reset-button press after the firmware update.

The system is rock solid for a few days, but then it's as if the DHCP and Routing services just die, and the gateway/router IP is no longer accessible.

I cannot help but think there's some sort of memory leak that eventually starves the system...Not sure if it's related to any Netgear Armor scans (As those are net-new for this version)?  Or possibly related to the QoS DB?  Right now I've noticed (so far 2 days in) that the QoS DB version has now disappeared...Can you share what you see for this? (Also note the 172.16.0.101 galaxy s20 ..definately not a wired device.. 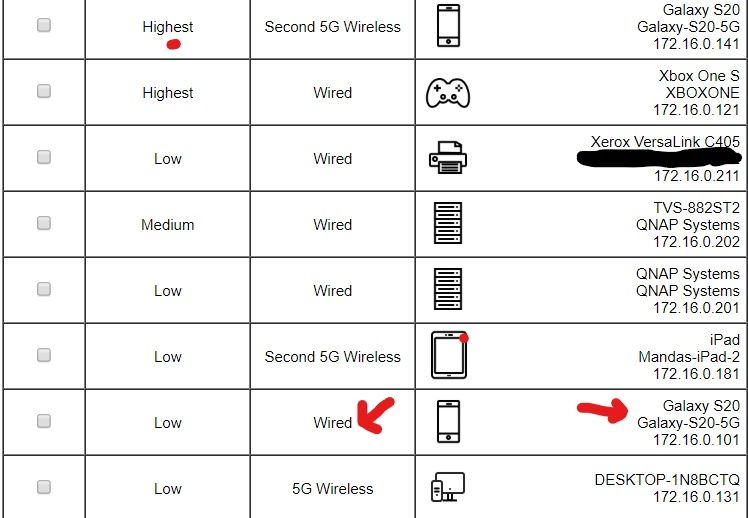 How does one update the firmware manually when Netgear doesn't provide the new firmware as a downloadable file?

These lists and editing capability have been broken on multiple models and across multiple versions of FW for years.  This has been discussed to infinity.  Release after release, model after model its been broken.  Most have just given up.

Netgear does not seem to be interested in fixing, or is unwilling to hire persons with the skill or capability to do so.

It doesn't matter what you name a device, it will change.  Doesn't matter how its connected, it might be reported incorrectly.  Edit a device or name and at one point or another it will revert, change or be reported with something different that what existed previously.

QoS, thats broken too.  Works, doesn't work.  I don't use it as my bandwidth doesn't warrant its use.  It doesn't surprise me that your database is updated, current, gone, etc.  Its probably updating and present, but not displaying in the GUI.  Like many other things I'm afraid.

I use very few of the features on the R8000P.  Not because I don't want to, but instead because the feature set has become so unreliable or broken I just don't care or have the time to bother testing, troubleshooting or figuring out why.  Its meeting my needs and has been stable and reliable.  I didn't pay full price for mine and wouldn't recommend that any one do this.  All you will be is disappointed.

Other manufacturers face similar issues, so switching to another brand doesn't mean you will have a fully functioning trouble free experience.  Consumer routers are hit or miss these days.  Some good, some bad.

I will upgrade at some point when the R8000P stops meeting my needs.  Its working for us now.

Attached devices list is broken as usual - it stops updating after day or two uptime.. as was written above, basic functions do work (no WiFi dropouts, even Smart Connect works here - about 15 wireless devices online - smartphones, tablets, notebooks).

Netgear makes some really great hardware - R8000P is very powerful router with 64bit ARM dualcore CPU and 512 MB RAM, three AC wave 2 radios.. but software side is **bleep**, not that competition is better - but Asus at least does try with their AsusWRT (RT-AC86U is identical hw with R8000P less one radio).

So it was stable for awhile after the upgrade...  until it wasn't, months later.  I don't think it's specifically upgrade related, but I woke to find my router seized (not responding, not passing packets) one day- it became responsive again after a off/on cycle.  BUT- it managed to forget all the customization on WiFi settings in the process.  It retained the LAN subnet setting, admin password too...  but still prompted for security questions again and password reset on login.  It also lost all static address assignments, timezone setting... and that's just what I found so far.  This happened a few times in a row, then stopped.  I wasn't sure if it was the result of some DDOS from external or what- I closed all my forwarded ports as a precaution.

I'll use this opportunity to point out that I will not ever recommend or purchase a Netgear product again unless there is a violent change in firmware quality, features, or Netgear permits/supports custom firmware application on this router.  I far prefer the latter.

Not that the pay features for software are redeeming at all, but the very principle of taking home a $300 router only to be prompted to sign up for subscription fees to enable features is beyond insulting. The hardware performance is actually quite good though- making the incredibly substandard firmware even more of a shame.