Please use this topic thread to provide your assessment on the New features/Enhancements and bug fixes.

Its good to see beta fw for new routeres But i believe this router was having 512MB of ram and being dual core 1.4ghz cpu it can handly pretty much heavy task,

Let it have download manager, VPN server etc. So that router resources are well utilized. 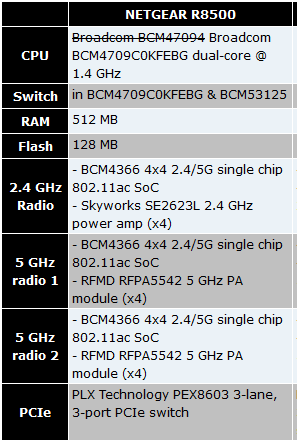 My 2.4 wi-fi would just drop out with the channel showing 0 and only a reboot would fix it. Hopefully this one will fix the problem and work better. So far so good with it after a few hours.
Message 3 of 133
1 Kudo
Reply

Hi Grimace,
I too have been having the 2.4 wi-fi dropout with the channel showing 0 and only a reboot would fix it. I have reported to Netgear tech and they also think beta firmware might help, which i have just installed. Keep me posted if you find out more - my direct email is johnhedberg@healthwaves.com
Message 4 of 133
0 Kudos
Reply

I changed the original setting from auto to a set channel after my first issue.  2.4 has been ok so far since.  Knocking on wood as I say that.

Compare the numbers as higher is newer.

I had done that on the previous firmware hoping it would fix my 2.4 issues based on some information I found. So, I still have a set channel for 2.4 with this beta software, and everything has been rock solid. 2.4 has not been flakey or dropped once. I would actually say the response time of the router pages has been better compared to when the 2.4 dropped in the old version. Once the 2.4 had dropped in the old version, the router web pages also slowed down. All of that is gone and the router has been fine. So, about 2 days in all is good with this new firmware for me.

Unfortunately after 36 hours my 2.4Ghz band has just dropped out using the latest beta firmware V1.0.28, so i have just installed beta V1.0.8.9 recommended by Netgear tech.
Message 9 of 133
0 Kudos
Reply

So far so good on my end. No 2.4 issues since I upgraded to this beta. Keeping an eye on it.

Is there a page withall firmware including BETA that we can choose from????

There is no firmware page, but right now V1.0.2.28 lasts the longest before losing 2.4Ghz band (30 hours) at my house. All others last only a few hours from my experience so far.
Message 12 of 133
0 Kudos
Reply

We have a variety of devices that work off of 2.4Ghz, and have ruled out most of them causing a problem with the 2.4Ghz Router band. However our Philips Illuminate holiday lighting system and Amazon Echo have not yet fully been ruled out.
Message 13 of 133
0 Kudos
Reply

We have a variety of devices that work off of 2.4Ghz, and have ruled out most of them causing a problem with the 2.4Ghz Router band, however our Philips Illuminate holiday lighting system and Amazon Echo have not yet fully been ruled out.
Message 14 of 133
0 Kudos
Reply

You can download any of the firmwares from the product support page on netgears website.  Is the QOS on your router enabled?

I have noticed that sometimes when i change the channel or turn on/off QOS in settings, i will also lose the 2.4Ghz band and have to restart the router. This firmware better than previous versions but still buggy.
Message 17 of 133
0 Kudos
Reply

Update: lost 5GHz completely last night. Reboot required to bring it back. Could not even see it. 2.4 was still working.

Yep, not fiddling with the settings after initial setup seems to help with longevity. The great thing about this router is when working it really punches out a powerful signal, otherwise I would have already returned it. Netgear has a winner if it can work out this firmware.
Message 20 of 133
0 Kudos
Reply

Hi Grimmace,
You are setting a record, what were your initial setting (QOS, etc)?

Well, for QoS, I have learned a few things. I set the internet speed manually. One thing I have noticed on the QoS network speed tests, they aren't working right with HTML 5 yet. I just upgraded to Windows 10 over x-mas and decided no more flash. The HTML speed tests only show about 5MB/s upload instead of my full bandwidth, not sure why, but it was the same across 3 different HTML5 speed test sites. Only one show my actually upload speed correctly. I think the auto speed test under QoS has the same problem. I don't let the router automatically decide what speed to assign to devices (the optimization setting), I do it manually. The auto assign is not accurate enough for me. I have on 2.4 and 5 (the two 5 radios use the same SSID).

I usually have 3 5Ghz devices and 12 2.4Ghz connected as well as 10 or more hard wired devices So usually, 20-30 devices are on at once. It sits behind my FIOS router. No SSID broadcast, manual IP assignments wherever possible. No guest networks are on. The only thing really bothersome on the QoS are the fact not all of the device pictures show up like in Genie. So, my Amazon TV icons don't show correctly.

I have been using Netgear network products for a while now, and their stuff has been great for me. This router replaces two Netgear r6300s. I needed two, one as an AP, to cover my whole house. The one r8500 now covers everything with a strong signal.

New record, 48 hours without a 2.4Ghz drop so far. Did 2 things: 1) Hard Reset 2) Have not fiddled with any settings (like Channel changes or QOS) since initial setup.
Message 24 of 133
0 Kudos
Reply

Been running since December 26 with no reboots. Had the 2.4GHz problem that others mentioned. Also, as someone else alluded to, this signal of this router is amazing -- I had the AC1900, and my new AppleTVs would periodically lose connection -- now, that never happens.