Bought my R8500 in Nov 2015. Never had any success with the smart connect and keeping both 5Ghz radios stable. Always tried latest firmware but couldn't stop radio dropping unless I turned smart connect off. Now the 2.4Ghz radio is dropping out to the point where the router needs to be rebooted for new connections to be made. It has been reset and firmware reloaded more times than I care to recount so I'm not interested in any responses espousing such. I am a tech professional and have been through all of the supposed fixes, including alternate firmware too. No dice.

Seems there are thousands of posts about this same problem that NetGear has not been able to address in 2+ years. I attribute it to being an early version of hardware that was not ready for primetime but when you pay a premium price you expect premium quality.

So this is my last ditch attempt for NetGear to resurrect some customer sat here, but I'm not holding my breath. My various requests on Twitter did not even garner a response, never mind a satisfactory one.

If you're listening NetGear, if you can RMA this unit and get me something that lives up to the hype and price tag, I might just reconsider.

But as of right now, I'm done as a customer and I'm going to buy something else and I will warn off anyone and everyone that asks my advice about which brand to buy. You've really burned a lot of customers with this debacle.

Re: R8500 wifi dropping getting worse

The rant may make you feel better but the volunteers here – this is mostly a user-to-user self-support forum with some input from Netgear's techies – need better information of what is going on.

For example, you tell us that you have "the latest firmware". Past experience tells us that this isn't always the case. Netgear sometimes puts out firmware that doesn't make it into the mainstream automated system until it has been through quality assurance tests. So telling us the firmware number is a better guide.

Then there is the possibility that the router is doing just fine while the wifi clients are doing something strange. By any chance do you have any Android/Chromecast devices around?

If you're listening NetGear, if you can RMA this unit and ....

Unless you have paid for something special, a device bought in November 2015 is well out of warranty.

Why has it taken you so long to turn up here with problems?

Re: R8500 wifi dropping getting worse

First of all, thanks to all the volunteers participating in online forums. But it's an unfortunate trend that so many companies are abdicating responsibility for support in this way.

Currently running R8500-V1.0.2.116_1.0.90. Attached are images showing the stock, Kong and DDWRT firmware I have downloaded and the vast majority have been on this device. 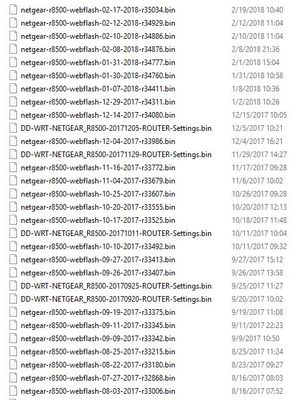 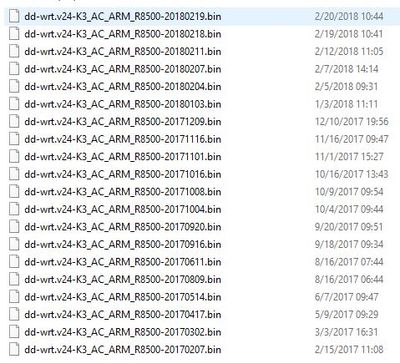 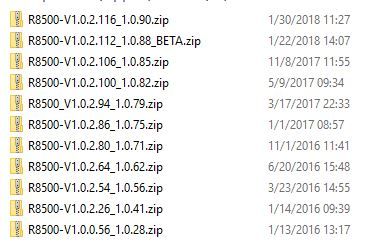 As to why now, you can see that I've tried and tried to resolve this via firwmare and have given NetGear plenty of time to come up with a solution but since this has never been addressed, yet is so widely reported, I really suspect it is hardware that is at fault. I was well beyond warranty before hardware became the primary suspect, not to mention the paltry 12 mths warranty; obviously NetGear is not very confident in the longevity of their device either.

I use a single Android device to monitor the wireless signal, it's asleep most of the time, visual trace attached. 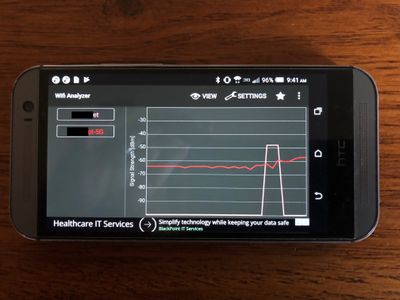 And if it is hardware, that is not something that can be addressed by volunteers in a forum. That's clearly not your fault but this seems to be the only avenue left at this point by NetGear's design.

Thanks for taking the time and effort to respond; more than can be said for NetGear.