I need to be able to nickname or rename devices that are connected to my network. It makes it much easier to manage similar devices (Echo, smart lights, roku, etc.) and also identify when an unknown device is connected.

Does anyone have an idea how to do this? If it was disabled in a firmware update, is there another way to accomplish this or is there a plan to bring back the feature?

In theory you can do this from the Attached Devices screen, but I have tried the 'edit' function and it appears to do nothing. Occasionally it will change a single device name.  But usually hitting save from within the edit function just reverts to the previous name/device type.

I've been agravated by lack of a solution for at least a year or more.  I believe a recent update to the firmware for the R7000 may have addressed this issue (version 1.0.9.64).  But I haven't seen any similar firmware update for the R8000.  If you search, you will see numerous complaints about this issue.

Here's an odd one. I found a thread where users said they were able to rename devices using the Nighthawk app on iOS. I downloaded it, renamed a device or two, then went to do something else. The next time I logged into my router from my PC, there was an Edit option on the Attached Devices page (image below). Does this mean there's a bug in the firmware or what? 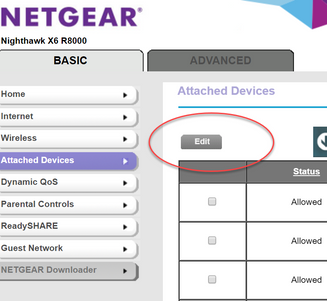 I don;t have this router, but I have an R8000P with the latest firmware and the Genie pages have this option on it and that was before I downloaded the Nighthawk App.  However, there are many bugs in this functinality at least on the R8000P.  First, naming a device in the Genie interface only sticks for a while.  Most devices simply revert back to "Unknown" with a generic icon after some random amount of time.  And I have a WiFi Extender (EX6150V2) with a switch connected to it and devices on that switch don;t show up in the Attached Devices properly - the assigned IP doesn;t always jive wit the reported MAC so naming these ones is pretty useless.  Note that on a different brand router, this is not an issue.

In the Nighthawk App, the TYPE of device seems to reset itself randomly though the NAME does seem to stick.  However, like with the Genie interface, the switch on the EX6150V2 does not translate properly.  Every device hooked to the ethernet port that goes to the switch is reported with the EX6150V2 mac address rather than the device MAC, and thus you rename one of these and they all take on the same name.  I can provide a screenshot if wanted.