I have a R6700 currently setup at home in AP mode with one SSID - Netgear's new OS allows using a single SSID for both 2.4 and 5GhZ. Can I add another R6700 in AP mode to provide more coverage with the same SSID? (I have an extra R6700 that a friend no longer needs) so might as well make use of it.

Why not run the experiment?

I am but how do I know if my phone switches from one AP to another if I have the same SSID?

If you have the different access-point radios set to use different
channels, and your (unidentifed) "my phone" will tell you which channel
it's using, then it should be possible.


I am but how do I know if my phone switches from one AP to another if I have the same SSID?

The opposite is true: A Wireless STA client can roam much faster between the different BSSID (virtual radio MAC) within the same ESSID (network name). The client does maintain a list of all BSSID is reach, and does run some scoring which is used to roam to the best available access point (screenshot taken on an Google Pixel 2, Android 8.1 for illustration - as there is an option to view it in a nice way): 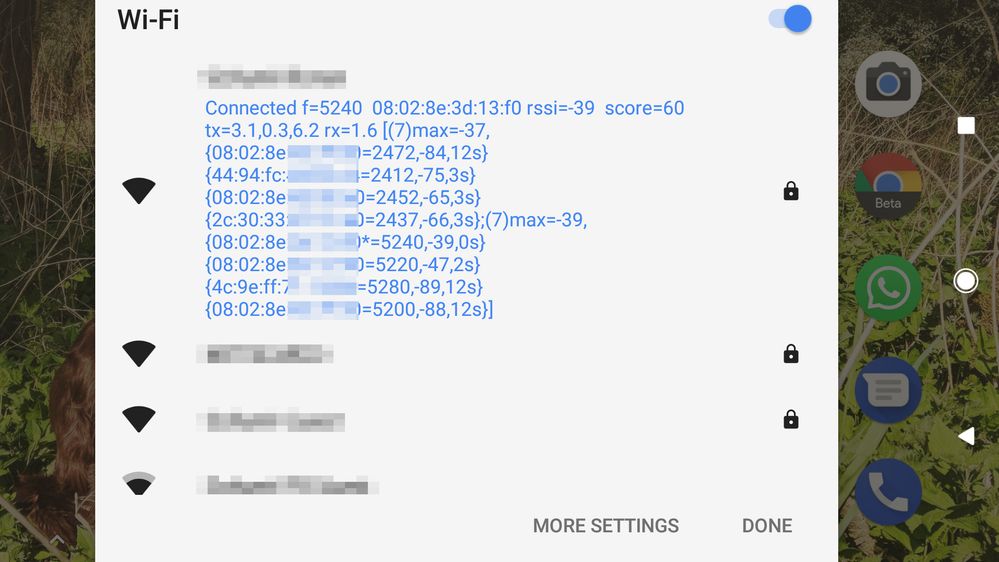 Here is why using different network names by radio is a bad idea: Once connected to a network (ESSID), the client does try to stick much longer to it, even if the signal level (RSSI) is much worse than other network names also known by the wireless client. The user experience is much worse.

That's why I've talked to Netgear to remove the **** requirement to force different network names for each radio interface. Glad they listened.