Can anyone please help me determine if the transfer speeds I'm seeing are what I should be expecting?  I feel they are too slow and something isnt right.

I have the Nighthawk R8000 connected to a Virgin media 100Mbps Vivid with the superhub 3 in modem mode.

Previously to the R8000 I had a WNDR3700v3 which was located in the exact same place. With that router I was able to do a speedtest on my broadband connection and get a reading of 110Mbps on both my Dell laptop and my Galaxy Note 9.  Both devices are located in the same room less than 4 metres from the router when I do the speed test.

Since upgrading to the R8000, the Note 9 is still able to report 110Mbps on the broadband connection.  The Dell laptop however, gave me problems initially.  It had a utility on it called SmartByte which really messed up the connection limiting it to 5Mbps!  I uninstalled this and things are much better but not as good as they should be.

For example, the Laptop is now only able to report approx 80Mbps using a speedtest on my broadband connection, when previously on the old WNDR3700 it was able to report the full 110Mbps bandwidth.

I thought I would be able to achieve much higher speeds transfering files locally between wireless devices on the LAN and to the ReadyShare drive.  When transferring a file from the laptop to a USB3 memory stick on the R8000 via readyshare, it is only able to achieve around 6MB/s and a similar speed when copying a large file from the laptop to the Note 9 over Wifi - usually around 7MB/s.

All 3 SSIDs are named differently and I don't have Qos or SmartConnect enabled.

If this is the case then my transfer speeds seem to be about a tenth of what they should be.

As the laptop is dual band I thought it should be able utilise both 5Ghz SSIDs at the same time for a combined 2600 Mbps resulting in a typical approx 100MB/s transfer speed.

Please would anyone be able to comment on whether what I am seeing is normal, or if not, how I can get my speeds up?

So everything is over wireless?  First step is to verify the PHY speed at which your wireless devices are connecting to the router (see duckware.com/wifi#PHY), and then take 55% of the PHY speed for a realistic 'maximum' speed.

The speed of your router ("1300 Mbps 802.11ac") almost never matters since wireless devices are the limiting factor most of the time (not the router).  Dual Band Wireless-AC 3165 is only 1x1.

Netgear marketing is to blame.

Thanks for the reply - I've had a look at duckware website you reference and it's very informative.  It seems like the network card in the laptop at 1x1 MIMO is a bit of a weak link which is disappointing in a fairly new and expensive laptop.

So, yes, everything mentioned in the original post is over WiFi except for the readyshare USB stick which is directly in the router of course.

My PHY speed seems to be 86.7 which if I'm understanding things correctly still seems to be on the slow side.  I also seems to have quite a few devices in the Network Adapters section in Device Manager if any f them may be complicating things?

I've attached screencaps if they shed any more light on this?

Further to the above, attached is the list of Network Adapter devices and the other screencaps 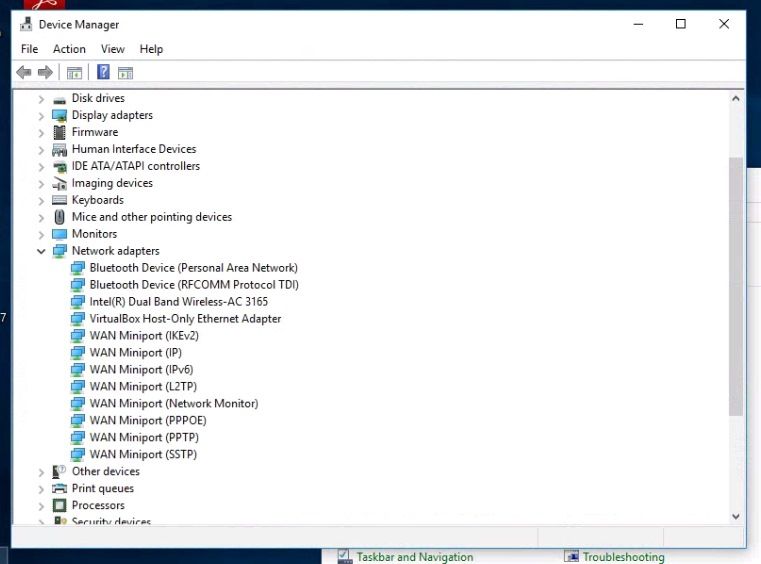 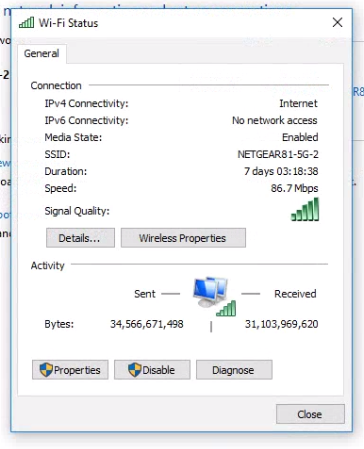 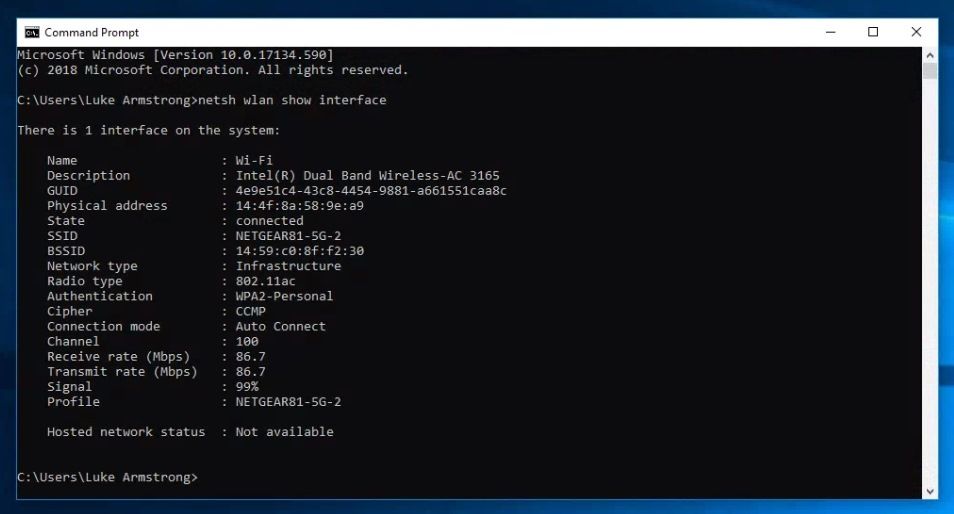 So now we just need to figure out why your Dell is connecting "n" instead of "ac".  Check settings in the router on that SSID and check settings for the card in the Dell.

Does the Dell always get this slow PHY speed, even with the other 5G SSID?  Likewise, does the fast wireless device get fast wifi when connected to the other 5G SSID?   Trying to isolate if only one 5G band is problematic (and the other fast), or if is only the Dell has problems (with both 5G bands).

(and FYI, no one can see the attached screen captures until a Netgear moderator approves).

Thanks for your help!  I have to go to work now and am away for the weekend but I will look at the settings in the areas you have mentioned and get back to you next week.

Hi Duckware and sorry for the slow reply!

Firstly, I've had a look through the Network Adapter settings on the Dell and I can't see any settings that look like they could be the culprit.  Same on the router.  Any pointers as to what settings might be guilty always appreciated.

I have tried a few of the obvious things before coming back to the thread.  I have used the Intel driver utility to make sure that the wireless adapter driver is up to date.  I have also removed any Windows applications that might interfere.  I removed VirtualBox which I know installs a network component.  I also removed the Samsung Flow application just in case.  Previously I removed the awful preloaded Dell SmartByte application which was restricting speeds massively.  Finally, I did a Network Reset.

None of the above have changed anything.  The connections speeds are listed below...

A similar test from my Galaxy Note 9 gives me the speeds below...

I took one of my work laptops home at the weekend - it is a Lenovo and it has Intel Dual Band Wireless AC 3160.  It connected with the following speeds...

What "mode" do you have 2.4 and 5 set to (under wireless near channel number setting)?   The connect speeds you report suggest a 20 MHz channel mode.  You want an 80 MHz channel mode for the 5 GHz band.

Thanks so much Duckware, pretty much sorted now.

The Basic wireless setup page where the setting you mentioned resides showed both 5Ghz SSID's mode being set to "Up to 1300 Mbps" on the drop-down combo box.  However, the Advanced-Administration-Router Status page displayed the mode as "Up to 289 Mbps" on both 5Ghz SSIDs.  So I set both modes to 600 then back to 1300 and it is all now working as expected - almost!

The Dell now connects to the 5Ghz SSIDs at 433 Mbps and the Note 9 connects at 866 Mbps.  I guess the difference is that the Dell has the 1x1 MIMO and the Note has 2x2?  Are these the sort of link speeds that I should be expecting?

However, one other interesting thing.  A few hours later I noticed that my phone (normally connected to 5G-2) was operating on 4G instead of Wifi.  I checked the Wifi settings on the phone and the 5G-2 SSID had gone.  It reappeared a few minutes later and I thought nothing of it.  The same thing happened again this morning.  I checked the Dell and the link speed had again dropped to 86.7.  I checked the router status and the 5G-2 SSID was once again showing the 289 Mbps mode.  I attempted to change the setting back to 1300 Mbps but the following message was displayed.

"The DFS channel is not allowed to use bacause the Radar was detected before. You can change another channel or wait."

It would not allow me to change the channel or the speed mode, displaying the above message no matter what I tried.  The only channels available for selection on 5G-2 are DFS channels.  The 5G-1 SSID has a mixture of both 'traditional' channels and DFS channels.  It is set to Channel 36(P)+40+44+48 and remains at 'Up to 1300 Mbps' and continues to connect at 433 Mbps.

I think this explains why my son has been moaning at me because the internet keeps going off - his phone is connected to 5G-2.  I guess this means that 5G-2 is not going to be a very reliable SSID for anyone to use if it is going to periodically drop out for a few minutes then drop to 289 Mbps because of this DFS radar interference?.  I can't set it to a traditional channel as none are available on that SSID.  Is this because of interference from my neighbour's routers or is it refering to another form of interference?  If this is the case then I may as well disable the 5G-2 SSID which seems a shame.

Many thanks for your help Duckware - it's much appreciated!

@MikeArmstrong36., Traffic Meter on? Can cause slowdowns.

Have you tried RESETting the router with the hidden button and then manually reentering all the settings?