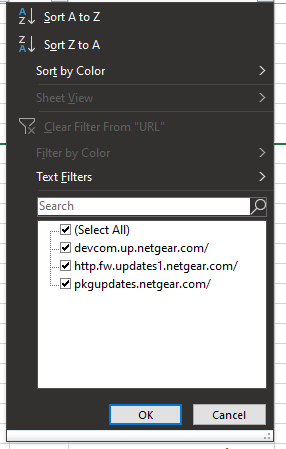 Can you use the Choose File button to attached your screen capture with? We have to wait for inline pictures to be approved.

So having FW.updates1.netgear.com doesn't block normal internet traffic on your RBR?

It blocked internet access on mine and caused the front LED to turn on PINK and the status to report No Internet on the basic tab.

Sorry. I gave you no back story.

Because of the latest firmware updates continuing to disappoint me I reverted back the the earliest available version for my RBK852 and a RBS750. I'm in AP mode because I have a content filtering device from Sonicwall in front on the NG stuff. I blocked *.netgear.com to prevent the auto-update on all the IPs for all my HG stuff. After reading other threads I realized there are more and different URLs that my NG equipment is hunting for an update from. I pulled the logs from the Sonicwall, pivoted the data and shared the results in case someone else meeds to prevent updates.

Ok, same story here when I was testing this out on mine in AP mode. Reason for asking is that if I blocked:

This caused the RBR to loose internet connection entirely and the front LED to turn ON PINK. Which is why I asked you to see if yours is fully working with these being blocked. Possible there maybe some differences between v3 and v4 sites being used.

So looking at what others posted,

were being seen as well.

I just had someone test the decom only and it blocked the FW check, however the system still updated regardless. There checking to see if a1599er83nvyl8.iot.us-west-2.amazonaws.com maybe needed as well.

You mention pkgupdates.netgear.com which is new to us however could be the additional key in blocking fully any auto updates from happening.

Mines on v4 again and will check this out for sure.

Thank you for posting. Good info to have.

For what it's worth, with NG IP addy's being blocked on *.netgear.com instead of more specific URLs, the result on my end looks like the attached pic. I'll continue to harvest data to see (over time) if the list grows further.