in inglese per favore

866 is a good speed. Top speed would be determined by many variables. I've seen as high as 976 on my system. My phone is currently connected at 876

Sorry I thought it was the italian community! My mistake!

I would like to know what is the AT frequency that I would get connecting a wifi 5 device to an Orbi RKB852. If I connect my iMac to Orbi RKB752 I get "866Mbps". Would I get an higher value if I were using an Orbi RKB852? 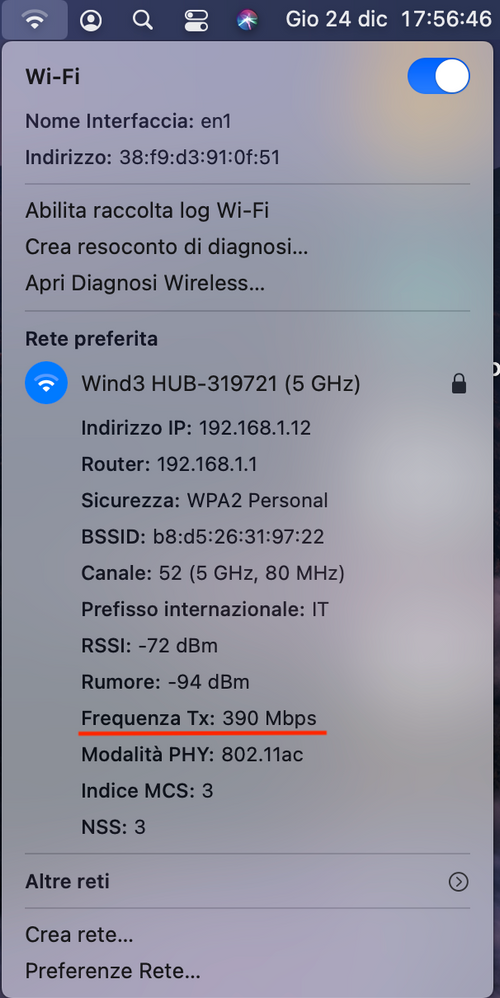 What is the model of the imac. Older iMacs may not support higher connection rates. Contact Apple support to see what connection rates are supported on you mac. My 2018 mac book pro caps at 1300Mpbs but it's not AX supporting.

What OSX version is loaded?

Be sure WMM is enabled. I don't think changing CTS values will help, though you can try. Under Advanced Tab/Advanced Settings/Wireless Settings change to 1500 or 2347 and see.

MacOS Big Sur, nothing changed that's why I was wondering if only ORBI RKB852/3 has 1300Mbps AC Wi-Fi speed..

I still don't understand where is the problem. Is it my iMac or the Orbi?. Maybe we could wait for someone who has the same orbi as me to get more info.

Would be helpful if you had another wifi device to test with.

I don’t have any other high performance device to test the wifi speed. Does Netgear provide this kind of information?
Message 12 of 22
0 Kudos
Reply

"last iMac" isn't a great description, however, it's perfect in line with the substandard information Apple does deliver on thier Wi-Fi clients in place on their products. Luckily, 3rd party references confirm the Airport Extreme 802.11ac up to 1300Mbps - this happens while operating on 3x3 and the highest standard modulation: 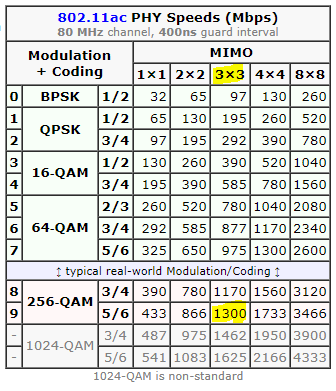 Now, this is almost like Apple specs - but we can recursively figure out what is going on. The "...for WiFi devices to connect to the Internet" is designating the max PHY link speed between the client and the Orbi router or satellite, the so called fronthaul; the dedicated WiFi link does make up the backhaul.

The RBK75x is a marketing-wise stripped down version RBK85x - however it's essentially using the same hardware and WiFi radios - but for a different purpose: The fronthaul and backhaul radios are swapped. 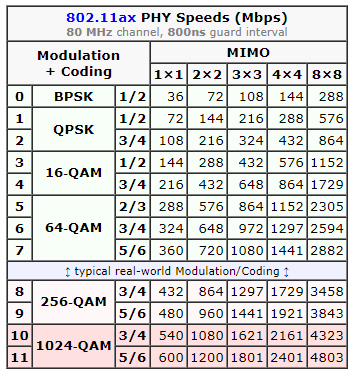 Than you @duckware for the always informative reference for explanaitons!

PS. The transalation "Frequenza TX" is awful - it's about the negotiated PHY link rate. Your provided screenshot helped a lot 8-)

Thats all I get on my Mac Book Pro 2018 on my 8 series. it only supports AC mode so thats the max rate.

Hi and thank you for your explanation but I still wondering why the wifi speed is up to 1200Mbps while the max attainable is 866Mbps. Are 1200Mbps attainable only from Wi-Fi 6 devices?

I must confess I’m a little disappointed by the way speed is described: only pro users understand how things really are.

The expression “Frequenza TX” is what MacOS says, I didn’t invent it. I maybe just translated it in the wrong way cause I’m not a native speaker.
Message 15 of 22
0 Kudos
Reply

@Fra11 wrote:
Hi and thank you for your explanation but I still wondering why the wifi speed is up to 1200Mbps while the max attainable is 866Mbps. Are 1200Mbps attainable only from Wi-Fi 6 devices?

Because speed means nothing - it's like these AX4200 or AX6000 numbers. Plain marketing. In my words often marketing lies.

The point is that a 3x3 client (very uncommon these days - majority of computer and notebook makers have switched to 2x2 clients a longer time ago already, mobile device makers anyway (to conserve power...) can only connect as a 2x2 device to a 2x2 wireless access point.

To document this, I have posted screenshots of these nice tables. If you intend to understand things a little bit better, quickly read over Duckware' lovely documentation https://www.duckware.com/tech/wifi-in-the-us.html

@Fra11 wrote:
I must confess I’m a little disappointed by the way speed is described: only pro users understand how things really are.

Here again, take this rant over to you computer maker which does write nothing but "802.11ac Wi-Fi wireless networking
IEEE 802.11a/b/g/n compatible" in the tech specs for your computer system. Probably because the marketing people think this is everything required. However, an 802.11ac client can be anything from a 1x1, 20 MHz bandwidth, max 120 Mb/s PHY link rate, to a 3x3 or 4x4 (leaving the more theoretical 8x8, and non-standard modulations away) 80+80 MHz bandwidh, with max PHY rates of 2.6 Gb/s resp. 3.47 Gbit.

@Fra11 wrote:
The expression “Frequenza TX” is what MacOS says, I didn’t invent it. I maybe just translated it in the wrong way cause I’m not a native speaker.

Perfectly aware this is not your translation my friend. Hey, I'm a native Swiss German speaker, so the latin computer and network language is more than just Spanish to me sometimes.

Apple does trend to use strange wordings even in thier English UIs, so no wonder translators are making it even worse... Example? "Private Wi-Fi" and further on they talk of "Wi-Fi Address". What it is about? Replacing the WiFi adapter MAC universally administered addresses (UAA) by a randomly generated locally administered addresse (LAA) for each wireless SSID.

At the end of the day, people seriously interested in real reliable speed use cables and fiber for networking, not wireless. It's strange to me to see high end 2020 iMac configured with i9 processors are still stuck on 802.11ac 3x3 max.1300 Mb/s - at least, for 100 USD more there is 10G (MultiGig compatibility available).

Hi and thank you for your reply. I must confess I agree with the awful translation of MacOS. I will read what you advice but I still don't know a thing: why I can find here "Wifi speed up to 1200Mbps" while I can only get 866Mbps from a 3x3 Mimo device? Ok the Orbi is only 2x2 but why the orbi login page says this? 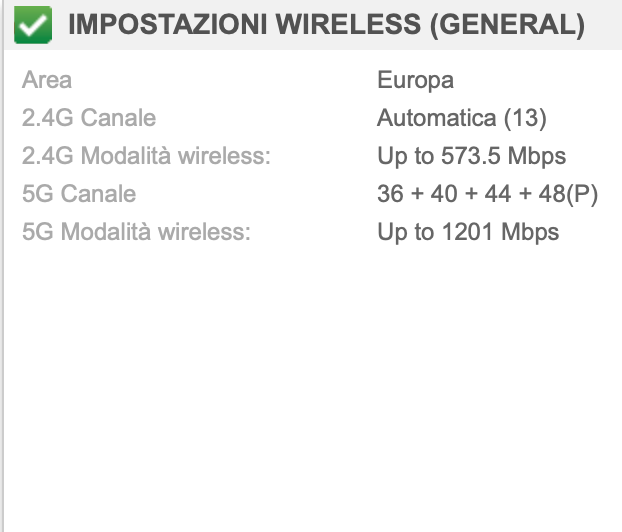 Can't see the screenshot yet, so the second part of your question has to wait.

Hi, I don’t know why you can’t see the screenshot but it is taken by the orbi web page (the one you could join by username and password). In advanced information it says “Wifi speed (5G) up to 1200Mbps”.

So with an AX client it will reach this speed right?

Anyway I connected the Mac via lan and it is very fast! I reach 750mbps over 1gbit/s connection. I just wanted the speed on my iMac, I don’t care of other device speed. The backhaul is very strong! Would I reach the same speed via wi fi by an Orbi RKB85x?

In the end I must confess that the product is very good and reliable but the description is awful. I wanted Netgear to be clearer with speed description.. disappointed.
Message 19 of 22
0 Kudos
Reply

Nothing to worry, it's under control of the Netgear moderators.

@Fra11 wrote:
So with an AX client it will reach this speed right?

In a similar location as your iMac to the router or the satellite - yes.

@Fra11 wrote:
Anyway I connected the Mac via lan and it is very fast! I reach 750mbps over 1gbit/s connection.

If considering the RBK85x instead - head to the left from the 4x4 column to the 2x2 and find the PHY link rate of the backhaul will be divided in half. So for the sme performance as reported, you need to re-arrange the network, or add even more satellites.

@Fra11 wrote:
Would I reach the same speed via wi fi by an Orbi RKB85x?

Taking the fact that the RBK85x does only have a 2x2 backhaul radio - as the front haul is assigned to the 4x4 thus show blindingly fast front haul link rates - I must say in a not very open space where the backhaul is run, the RBK75x is the much better balanced solution.

In the end I must confess that the product is very good and reliable but the description is awful. I wanted Netgear to be clearer with speed description.. disappointed.

Convinced Netgear does love to hear this - usually we meet the really unlucky or unhappy customers here in the community.

It is not easy to describe the things in a customer friendly way as I've tried above. The industry does still prefer to use peak rates, sums of peak rates, ... and add a "max" or "up to" to it.

The speed is very high for me. In the same position via wireless it only reach 500-600 Mbps.

I think it's more attractive for users to read "Up to 4.2 or 6 gbit/s" but in the end this description doesn not make sense. If you start study a little bit you could find it very disappointing. I must confess that at first I bought an Orbi RKB13 thinking that it would be suitabile for connection up to 1.2Gbit/s..

We I first thought about a mesh system I thought I'd have problem with it but Orbi makes everything easy. It's perfect and it's expansive.. but I'm happy. I'm only disappointed by the claim cause I've been fooled by it, at least the first time with Orbi RKB13.