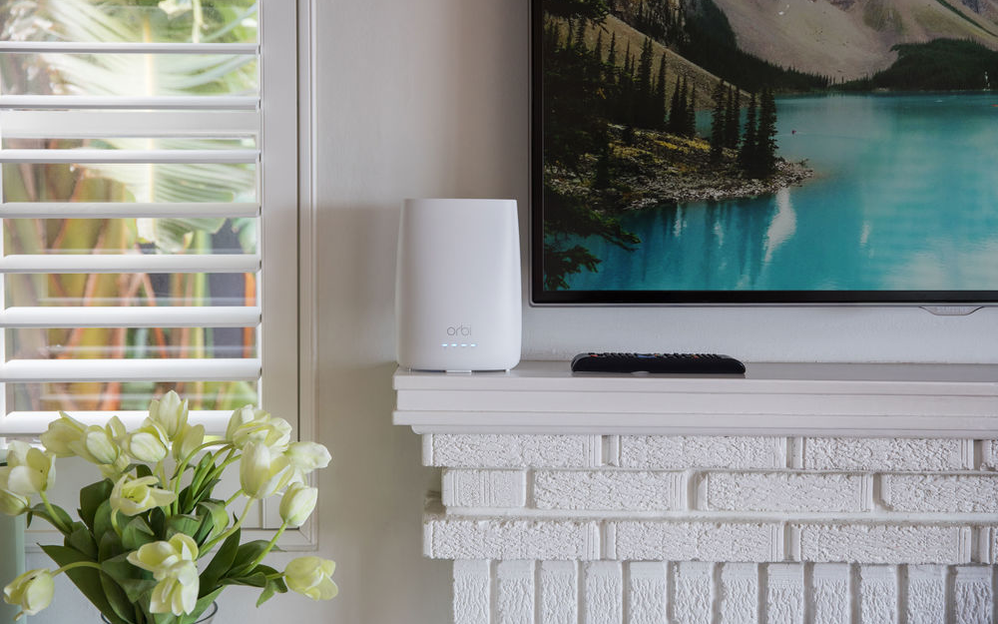 What is the CBK40 Orbi Whole Home WiFi System?

What ISPs are compatible with my Orbi Cable WiFi System?

How is the CBR40 Orbi Cable Router different from other Orbi routers?

What are the hardware features of my CBK40 Orbi Cable Router and Satellite?

How do I set up my CBK40 Orbi Cable Router and Satellite?

I'm so proud of Netgear for taking the king market in Cable Modem. This NEW Cable Modem gives a big shocks to ISP modems.

But the only I'm very dispointed is that Netgear is not supporting Voice line. I have digital Voice line but after hearing news New Orbi Cable Modem supports only router and not voice.

I hope very soon Netgear come out with an another model that supports Voice line.

I heavily invested in your Orbi wifi system and am very interested in purchasing the new CBR40 cable modem. I currently have the RKB50 system with a satellite connected to it as well. Would this system be compatible with the new CRB40? Thanks. And also are there any future products similar that will support cable modem/voice?

I just purchased the RBK40 system with 2 satellites and a CM600 Modem. If I purchase this new product what happens to the router in my RBK system? Can it be used as another satellite? I realize that the CM600 modem will no longer be needed. Will the new combo be better than what I already have?


I just purchased the RBK40 system with 2 satellites and a CM600 Modem. If I purchase this new product what happens to the router in my RBK system? Can it be used as another satellite? I realize that the CM600 modem will no longer be needed. Will the new combo be better than what I already have?

Since no one more authoritative has replied, I’ll chime in.

Replacing one DOCSIS 3.0 modem with another won’t be an upgrade. My ISP, Comcast, emailed me saying “We see you’re still using a DOCSIS 3.0 modem. You should upgrade to 3.1.” So I did. Comcast is actually providing 3.1 now.

Unless you’re seriously short on space or electrical outlets, I see no advantage to a combined modem/router. Keeping them separate provides more flexibility when you need to upgrade. If you buy the combo unit, you’ll need to put your existing Orbi router into Access Point mode. It will not work as a satellite.

Thanks for your answer. I am with Spectrum and last month I upgraded to their 400mbs/sec plan. I then purchased the Orbi RBK system and added another satellite. I wasn't sure if the Arris modem they rented me was good or not but on their website the Netgear CM600 was what they said would work with this speed. Turns out the Netgear router does not seem to be any better than the Arris, but now I no longer need to rent a modem from them. I am just trying to eek out as much speed as i can for what I am paying for and I just saw this today and was curious about it.

Thanks again for your reply.

that was my question also

Obolsesence will be based on ISP support of DOCSIS 3.0 and it's obsolesence with ISPs. You'll need to ask your ISP how long they are going to be supporting 3.0 and migrating to 3.1. ISP will not be just turning ON 3.1 and turning OFF 3.0. IT will be a slow process.

I would like NG to really take a good look at this.

Why does it take one to two months delivery of the orlo cable moden from amazon?  Where can you buy the cable modem?

This is a NG Orbi CBK40 Cable modem forum.


Why does it take one to two months delivery of the orlo cable moden from amazon?  Where can you buy the cable modem?

The CBK40 is a cable modem/router sytem thus it requires being connected to a Cable ISP service. It does not work on Fiber Optic or DSL ISP service systems. Users looking to by a Orbi CBK40 are recommended to contact there ISP serivce and ask them if they support the CBK40 or the CM700 on there ISP service. If they don't and you still want to use a Orbi system, look for a Orbi RBK40 or RBK50 or RBK53. These models do not have a built in modem.