Seamless roaming isn't only a feature of mesh networks. The way the nodes talk to each other is what makes a mesh network a mesh network.
Message 226 of 252
2 Kudos
Reply
Highlighted

The arguments against wired backhaul are amazing. If the ONLY reason to buy Orbi is the wireless backhaul, the design/engineering team has failed spectacularly.

Sorry - your are not right. This product is designed for wireless backhaul and Mesh. There is a lot of other Netgear stuff you can buy if you just need wired backhaul and some wireless AP. If you just bougth for design reason - ok - that might be your prob.

I am on telling if your reason is single SSID and fast roaming there are other options.

So tell me why Orbi must have wired backhaul and there is no alternative for you.

Maybe I have overlooked something.

I don't think they've failed, but you are wrong.  A mesh system that allows for seemless handoff under one SSID and management layer via wired backhaul is what we want.  You can't accomplish that with a cheaper solution.  If Netgear said, we can't/won't do that, then we could move on.  But their solution with wired backhaul would be the best solution for most.

You spot in on one side and are totally wrong on the other. I don't like to do advertisements for other brands in detail, because I like Netgear, but looked for alternative as Orbi for me was just MUCH TOO EXPENSIVE just for single SSID and fast roaming.

I have decided for 2 Unifi UAP-AC-M each 99$ installed Controller software by Docker on a NAS. If Docker/NAS is not an option, you can work without but full feature set needs a controller device for less than 100$. The APs are wired, full configurable/flexible.

Single SSID, fast roaming as basic. Feature set is unbelievable. No need be for me.

But in fact much cheaper as an Orbi.

So I am still saying if you need wireless backhaul and don't own an Internet router already Orbi is for me one of the solutions on the market.

If you have wired backhaul other stuff is definitely better and cheaper solution.

@truepudding wrote:
A mesh network allows a client to connect to one spot and roam to other spots without dropping its connection. You do not get that with APs.


edit: this is the reason I bought a mesh network anyway. I’d like to take a Skype call or play a game and walk anywhere my network supports without dropping.

Lets say - your are not precise. You will and need to disconnect. No client is able to handle 2 wireless connection in parallel. The question is only how quick the handover is from one to the other. And the AP helps to force if able to. So you may realize it or not - depends. Feel free to check by continous ping while moving.

He's incorrect in thinking that is what mesh is. Zero hand off, fast hand off, seamless handoff, whatever the various implementations are not mesh and not exclusive to wireless mesh. Wireless backhaul though is. Anyway wired backhaul is coming so they have been heard which means another feature which is nice.
Message 230 of 252
0 Kudos
Reply
Highlighted

So tell me why Orbi must have wired backhaul and there is no alternative for you.  Maybe I have overlooked something.

That is not the statement I made. Re-read it again.

Thanks for the note, I apprecaite the info as what to has worked for you.  And it's not a bad suggestion, not sure if my qnap nas has enough horsepower to run that.  I really want a deivce with simple updates and mangement.  I have a feeling it will be a 2nd Generation Google Wifi device or the Orbi with wired backhaul.

Just purchased and installed - I have 2 dead spots in the house where I have already pre wired Ethernet ports - incredibly frustrating I cannot hard wire a couple of satellites into these already - your response was back in April - do you have an anticipated launch date for this feature if not I will return this system and switch to a mesh that offers hard wired satellites?

i cant give you a release date , i can only tell you its on the cards as stated by a netgear employee

Another user here who would like to see ethernet backhaul added.  While I don't strictly need it now, the flexibility and future-proofing (should I decide to move) it adds makes ethernet backhaul a no brainer.  Plus since it's become a standard feature in this segment of the market, its continued omission from Orbi is a growing flaw in an otherwise great product.

Is there documerntation on how to use the wired backhaul? Just plug it into any ethernet slot and the satellite will figure out it is input not output?

Yes any port will work

I've have been using the wired back haul since the firmware release and it works great!  Thanks guys.

I just wanted to thank you. Before the ethernet backhaul the Orbi system was already perfect for me, i'm very happy with it and i recommed it to everybody that has a big house and wifi issues. It's been more than six month with it and never had an issue.

I'm about to move to a house with very thick walls and knowing that i have the possibility to connect the router and the satellite through an ethernet cable is great. You could have not added this feature and you did it anyway, that doesn't happen very often with tech companies so congratulations to you. The next time i need to buy a network device, it will be a Netgear for sure.

I have had to buy both a rbk44 and rbk50 to try to get coverage in a 2500 square foot house and two detached garages (old plaster walls don't help).

The extra router is now a paper weight. Aside from all the other problems with these systems, it would at least help to be able to set up my extra router as a satellite (Not an access point).

Netgear should push out a firmware update that allows routers to be set in satellite mode so two systems can be integrated by Ethernet connection. Auto detect would be even better (like velop), but at very least, the option to choose would be nice.
Model: RBK44| Orbi AC2200 WiFi System, RBK50| Orbi AC3000 High-Performance Tri-Band WiFi System
Message 242 of 252
1 Kudo
Reply
Highlighted

Is there documerntation on how to use the wired backhaul? Just plug it into any ethernet slot and the satellite will figure out it is input not output?

yep just plug into any slot on satellite.  For example on satellite I have one ethernet cable coming from the router on teh other side of the house and the other plugged into Satellite -> to the local desktop PC.

I updated the firmware as suggested.  I can only get one of the two satellites to work on a wired backhaul.  Here is the strange thing, the LAN port connected to the wired satellite is showing 100M whitle the other LAN connected to a PC is showing 1000M.  I have gigabit internet (max speed has been tested at over 900).  I thought something was wrong with the LAN port on the router so I switched to a different LAN port, same results.  Is it possible that the RBR40 is limiting its LAN port output to have only one port capable of performing at 1000M?  Perhaps they dumbed down the remaining two ports once you connect all three?  I got this data from the Advanced menu, Internet Port, Show statistics.  Has anyone experienced a similar situation where only one satellite works when you try to use ethernet backhaul?

They should have 4 10/100/1000Mbps ports on the unit have you test with a different ethernet cable?

When is this becoming a reality ? Been almost 1yr now since the above update.
Message 246 of 252
0 Kudos
Reply
Highlighted

As it turned out, I did have a bad ethernet wire so it was not an issue with the ORBI.  The support unit in HK also tweaked the unit (using remote access) and now the issue of only one satellite unit working at a time was fixed.  It still has intermitten issues connecting to the the internet.  It was explained to me as an issue with my internet provider.  I have to "wake up" the unit in the morning after a night with no activity.  It is slightly annoying but I am getting decent WIFI performance all through the apartment.  Speed is still fastest near the main router, satellites are a bit slower.  Wired ports has the best performance using Speedtest.com measurements.  There are probably more settings I can tweak to improve individual client performance but I am happy with the current setup

The ORBI app is kind of stupid with this.  It will tell you your current Firmware is up to date but it isn't.  You have to manually download the latest update from the website and do a manual install.  Just follow the instructions.  Make sure you install the satellite updates first!.  Wait till it is finished and restarted before updating the router itself.  Also do it over a wired port, don't do it over WIFI.  Once that latest firmware is installed, it works, albeit still needed local support to mess with the settings for better stability.

So wired backhaul is a neat feature but really unncessary if the product goals are for a wireless mesh network.  I spent the money for the RB53K and its wireless features are great for someone who's house is not wired for ethernet.   The ethernet bridge ports on the satelites are a welcome aspect.

I'll be returning my gear as well.

Forgot to check the existance of the ethernet backhaul (as I imagined it was available).

Cannot wait for the firmware update... If it ever sees the light of day...

I returned mine yesterday. It is too bad because they were performing quite well but did not fit my use case. After thinking about it, Not to second guess the netgear engineers and marketing guys but being in the tech field doing both jobs myself, I would have adopted a slightly different product strategy:

1. I would have made the routers and satellites interchangeable given the fact that they are physically identical in terms of hardware. It would have saved cost by releasing a unique unit and lowered the inventory management.

2. I would have designed it with the flexibility of the ethernet backhaul, used a 3x3 broadcast radio with the 4x4 backhaul

3. limited the backhaul to 2 satellites to maintain performance of the wireless satellites.

I spent some time testing different 2x2,  3x3, and 4x4 APs with a single clients on the 5GHz AC band for those who think the unifi AC lineup is anywhere close to an upgrade, think again. they are practicaly the slowest AP you can buy with the exception of the just off the mill AC-HD which is finally using a decent/enterprise chipset. The others use a chipset only found in a couple of very poor budget N or "AC was an afterthought" routers. The AC-Pro achieved 25-50% lower speed vs the Apple AP at most locations in spite of using 50% (6 Vs 4) more units in my topology. 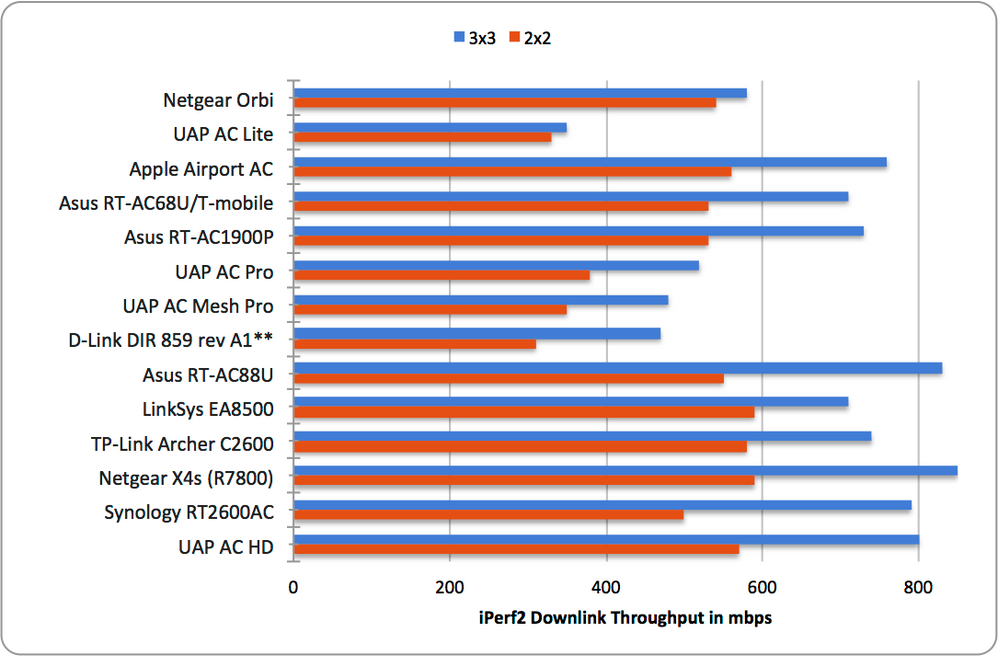 These tests are only for information, and not relevant.

In case of orbi you can extend speed in other rooms.

Also design of houses are not the same.