Lots of Promise. But no joy

Lots of Promise. But no joy

I am a network engineer and the CEO of a company that makes High speed wireless internet access equipment. We have a patent on high speed distribution technology in the 12 GHz range for last mile connectivity.

I have a hobby of home automation. Because of this I have 16 Wifi based cameras and a trove of home automation devices that live on the network. Due to the traffic that invoves, I have two wifi nets, connected into differnet intenret acess points to serve my home. Both are 126 Mbps links. The first is only for the home automation and the other is for personal and family use.

I had used Eeros as the family net and had an old system of 6X Apple airports to support the home automation. I decided to migrate the home net to the Orbis after some research. However I have been unable to get them to work reliably. After a week or two trying to get all devices on the Orbi net I decided to switch and use the Eeros (x4 - 4000ft^2) for the automation and use the Orbis as my home net. The Eeros were able to handle all of the devices and all of my cameras.

So I installed the Orbis (x2 - 5000ft^2) in my 3200 ft^2 home.  Since that time I have very unrelaible conenctions. Below I have screen shots of a MacBookPro (802.11ac) at 4 meters from the main router with 1 interior wall separating. Note that these are within minutes of each other on a network which provides 126 Mpbs to the router wired. AirportE is the Orbi net.

I called Netgear and have been working with them. I have provided 2 Floor plans of my home. Config files, debug logs X2, A wifi channelization map. A heat map. Screen shots and differeing bandwidth tests. I have shut down the Eero net and moved the sat. twice. I have done 4 firmware upgrades. I have spent literally 2 man days on the phone or trying to configure consumer level devices.

I have until the 14th to return these devices.  So Netgear decided to overnight me a second satelitte for more testing (thanks Netgear) but I still neeeded to supply Credit card.. The Satellite arrived (without a power supply!) and running v 1.4X of the firmware so it would not sync. I suspected this and attempted to upgrade the firmware. Also would not work. After an hour of trying three computers and three difffent browsers I called Netgear again and they sent me V1.11X firmware and V.1.12.X and told me to installl V1.4 -> V1.11 ->V1.12 ->v2.1.

But this wont install either. So I tried  V1.4 -> V1.10.x then V1.4 -> V1.8.x then  ->V1.4 ->v1.5x. None would install. I called Netgear (level 2) again. I was told I would have one of the Level 3 techs call me today at 5 PM. I explained I knew that call was scheduled and I was supposed to discuss the results of testing the new Satellite which I can not test without syncing it to the main Orbi.

The most amazing part to me is that the Eeros frequently outperform the Orbis even with the huge amount of traffic on the Eero net.

The obvious question is why not simply get a second Eero net? But the EERO philoophy of KISS means I lose channelization and the Eeros do not expect a 2nd net in their proximity so the 2.4GHz does not hop. Two Eero nets would interfere with themselves in the 2.4Ghz.

So I think if level 3 can't solve this I will have to see about replacing these with a VELOP system or some other system. Sadly as the CEO of my company I was considering replacing our Xirrus spots in the systems we sell with the cheaper ORBI PROs but I have some doubts as to the reliablity now.

Does anyone know a way to force firmware updates? Other than MANUAL update of course. 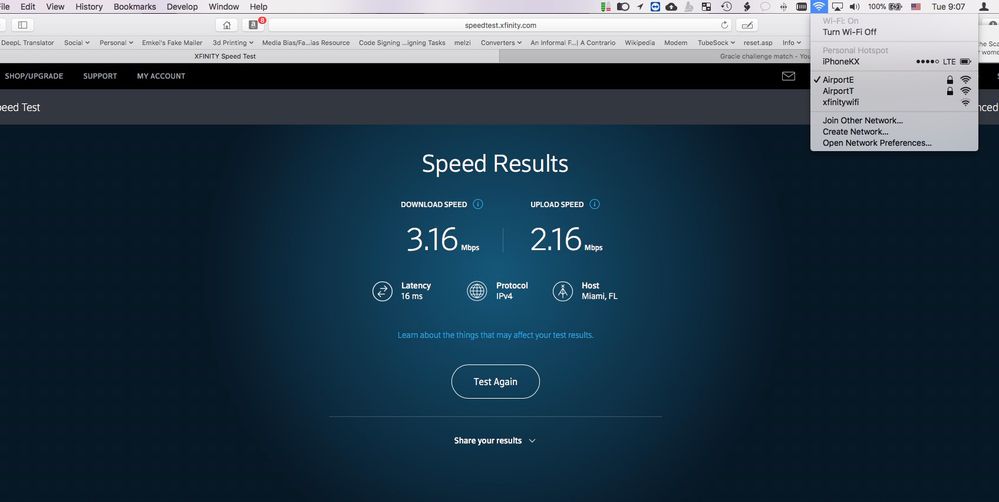 Got a call from Alvin and he workled hard to resolve this problem. I have the replacement Sat up and connected to the system and will conduct testing to see if the performance is affected.

Thanks very much to Alvin and Netgear for shwoing they take this seriously.

Even running two satellites the system is very unrelaible. Setting up 9 test points thoughou tmy house I tested throughput on all points. I have attached a PDF.

The EEROs system will provide 120+ Mbps at all sites but 2 (and they are still over 100Mbps) with the surveillance cameras inactive.

I have been trying reducing output power in case of saturation.