I have an issue with the switch where when a device attempts authenticate on a the port and it fail, the switch sets it to the guest network but does not honor the reauthenitication timeout.

I am using Radius for athentication and have set the switch to use MAC Authenication for my ports. I do have a POE AP (Netgear WAX214) and it's set to use WPA2/3 - PSK for wireless clients. My switch is running 6.0.8.2 and is able to authenticate with the radius server for clients, but when it doesn't find the users or I have something up with the radius server, my devices default back to the guest vlan and get stuck. 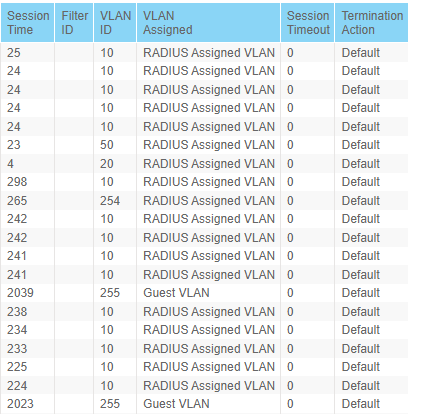 My goal is that all my ports hit radius(including wireless users which works in the current state outside the fact that they don't reauthenticate when they are on guest vlans) and authenticate, but if they fail to authenticate, I want them associated with my guest vlan which is an isolated network. I don't want my users to be marked as unauthenticated because they are able to access the wireless network. It's very likely that the configuration I'm trying to do is not supported or isn't set up correctly on my switch but wanted to see if anyone else has seen this and/or has insight on this.