Any opt out? Mdoerator please find out. Thanks.

Hello everybody, here is our latest update regarding Router Analytics Data Collection.

This better have an opt out option.
Message 1 of 55
1 Kudo
Reply

Yeah...I'm going to say this as clearly as possible.

Netgear, this is NOT OK.

If you want me to create a support package when I ask for it that includes _some_ of this data, that is acceptable and warranted.

Doing it as a matter of course for "service improvement" reasons is bull**bleep**, EVEN IF YOU CAN OPT OUT, because you know and we know that it will be enabled by default, and most customers not only won't, they won't even be aware it's there.

"In a support page update, NETGEAR says that its high-end NightHawk R7000 will begin recording specific information, although it is currently unclear on if the feature can be disabled." I notice that they don't provide a link to this supposid support page update.

Netgear has put up a support page for enabling/disabling the data collection:

Unfortunately, the page Netgear points at (router update page) doesn't have the said options. I didn't find other pages in the firmware with the options...

Data collection (and the option to disable it) was only introduced in FW V1.0.8.34.

You are probably on an older version that does not have this option yet.

Netgear better switch this on through opt-in otherwise they are in violation of EU rules. And since the commotion about US datafarming they can be sure they'll get fined.

As what @Crazyharry mentioned there's an option to disable the options.

When we upgraded firmwares in the past, the 'standard' answer from NetGear always was "reset to default settings, then upgrade to the new firmware and finally enter your settings again manually"

=> So how does Netgear think this process will be accomplished with Automatic Updates?

Or is "reset to default settings" not needed anymore?

Per our engineers, it's not mandatory to reset the routers, especially Nighthawk products, with these new firmwares.

Should you encounter any issues then that's the time you will need to reset.

@ElaineM How long do I have to disable this option before it sends data, since it is opt-out? Am I supposed to disconnect my router from the internet in the middle of a firmware update just to be sure? Does it send it right away when it boots up? Can I see what data it is actually going to send, i.e. not just your KB article?

If I don't have time to turn it off safely after updating that's not even a legit opt-out IMO.
Message 11 of 55
0 Kudos
Reply
FURRYe38
Guru

@FURRYe38 while that's a technical workaround I don't think it's anywhere near acceptable in terms of the concept of an opt-out.
Message 13 of 55
0 Kudos
Reply
FURRYe38
Guru

It can be disabled during the process.

So thats how Netgears plans to get the  information for it's qos updates let the routers report back about the traffic on the router.

Are you sure thats the only data they are collecting?

So thats how Netgears plans to get the  information for it's qos updates let the routers report back about the traffic on the router.

No but it makes sense they would need a consatnt source of data to try to keep up with new games and services I am sure if they can they will find other ways to used the data collected. Makes one wonlder what is big brother up to when they spy on your router at the firmware level and if you disable the feature is it really disabled.

Yes, it is a concern. It would be nice of NG would delare the details of this fully. Privacy is a major concern.

Let's trust Netgear to do the right thing and not collect anything when it is disabled.  It would be too easy to discover something underhanded.  The negative publicity wouldn't be worth it.  They'll probably get enough data from all of the people who don't know about an opt-out feature.

The ethical thing to do woould have been to make it an opt IN feature not an opt OUT. NG is relying on the average Joe (and Jane) who would not even notice or if they did would not undetstand the raminfications. I don't think NG has any nefarous intents but the data could be compromised due to poor security by NG. Still its an invasion of privacy, What if your local telco put a listening device in your home and in small print insider the jack said you can opt out of our recordings? Most Janes and Joes may not ever review the GUI post installation.


The ethical thing to do woould have been to make it an opt IN feature not an opt OUT. NG is relying on the average Joe (and Jane) who would not even notice or if they did would not undetstand the raminfications.

There is saying that goes something like, "Features that are disabled by default don't get used."  Obviously, it's not a universal truth but it applies here.  If Netgear were to make this opt-in, almost no one would willingly turn it on, which would defeat its purpose as far as they are concerned.

I don't think NG has any nefarous intents but the data could be compromised due to poor security by NG.

I don't think Netgear has nefarious intents, either.  From their support article:

Technical data about the functioning and use of our routers and their WiFi network can help us to more quickly isolate and debug general technical issues, improve router features and functionality, and improve the performance and usability of our routers.  Such data may include information regarding the router’s running status, number of devices connected to the router, types of connections, LAN/WAN status, WiFi bands and channels, IP address, MAC address, serial number, and similar technical data about the use and functioning of the router, as well as its WiFi network.

There's really not much evil anyone can do with information.

Still its an invasion of privacy, What if your local telco put a listening device in your home and in small print insider the jack said you can opt out of our recordings? Most Janes and Joes may not ever review the GUI post installation.

It's not this bad.  Netgear isn't recording your data traffic.  It's more like your telco putting in a device that records the number of telephones you have in your home, their brands, how many are cordless, what frequencies they use and connection quality.  In the grand scheme of things, this is relatively harmless.  Haven't said that, I still wouldn't turn it on, either.

ISPs are already collecting way more personal information.  They can build a pretty good profile by inspecting your traffic, especially the DNS queries.

You can count Google and FB as well doing some form of data collection. Wheres the opt "IN" option with them?

@TheEther I'm going to disagree with you and say it is that bad.

MAC addresses of connected devices tie those specific devices directly to me and my family. Not just their brand. Now they can be tracked moving from access point to access point -- where are people in my family going, what are they doing? (If they are seen at coffee shops, stores, etc.). Who do people in my family associate with? (who owns the other APs they connect to). What is the owner's name, home address, e-mail address? (If I've ever connected an Arlo to my network Netgear knows it came from the same IP and they have all the account data). Do I have an open or closed AP? (Could be relevant in a copyright case e.g. Napster etc.).

There are untold ways this data could be used in very bad ways with very little difficulty -- I work with a lot of data every day, I know how trivial it is.

Do not assume that what NG states their intent to be today is how the data will eventually be used.
Message 23 of 55
0 Kudos
Reply

To tell the truth some where there is a record of every bit of data you have ever placed or received on the internet and if someone wants to find it they will.

I just do not like the idea of spying by your very own router only time will tell how this issue turns out and it will be posted about many times by other people over the years.

For what it's worth - the R9000 Dynamic QoS feature does also have an (Opt-In by default if I'm not wrong) for sharing QoS analytics: 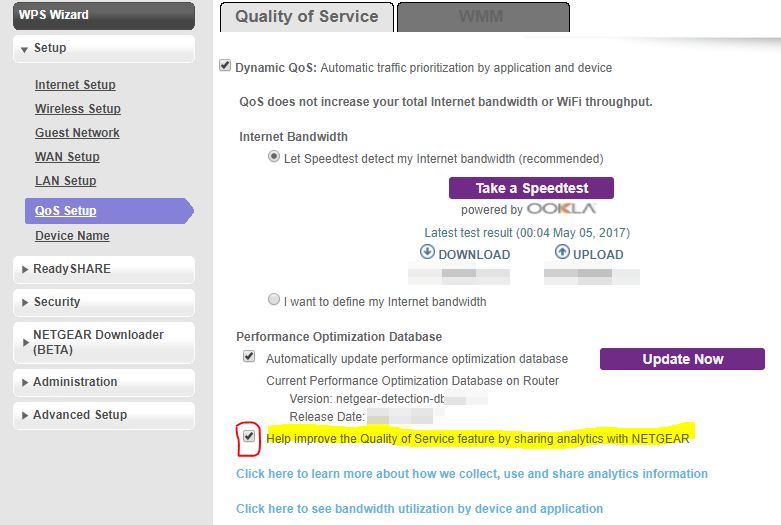 Curios if this part is included on the R7000 data collection, or if that part is dedicated with the Dynamic QoS settings, too.