Well I guess I look at it logically... I don't know the code but I made some assumptions.

First the R7000 is using NVRAM, that is it is like a phone or tablet. After powering off it retains the settings and 'private' data. Secondly, the h/w is a known factor, the size of NVRAM is known and never changes. There is an entry point the h/w jumps to to load on power on. Another for reset. Both are handled by the h/w or rudimentary OS running the h/w.

If the above are true, then the design of the Firmware should be straight forward. Once you come in via power up the router does what it needs to do, initialize as the s/w it needs too (what some call that 'drivers'), reads the store settings from NVRAM, clears out ALL 'live' data and then gets the 'live' data that it needs (making log entries, getting attached devices). If the first time you are doing customization and/or you change a setting, when you press 'apply' it writes that data to NVRAM. Probably at the top of memory (again, the s/w knows where this is as all R7000's have the same RAM size). This area is probably of fixed size with plenty of growth space for future needs. Below that would probably be the live data area and with a known size per F/W version. Only other 'buffer' is probably the area to load in the new flash for updating. I'm sure there is enough space to do all this as well as more than enough buffer space for future growth.

Only basic difference on a RESET or via the ERASE from GENIE would be that entry point would ERASE the stored settings in NVRAM and then branch to the power up.

If the above is true then the only 'problem' might be some later version mixing the order of the stored settings. Going back to an older version or loading saved settings from and older version over a new version could cause problems.

Lastly a possible NVRAM byte changed value over time (rare) and it wasn't really 'clearing'. Maybe the s/w could tell that and 'fix it' using a different area, but possibly only when run via reset?

Like I said, have not seen the code, but I don't think 'drivers' exist at all. It is ALL on firmware load to NVRAM.

It is also possible that some code in the firmware might not even be replaced during and upgrade? Doubt it, but a RESET should only clear the saved settings, not much else I'd think that was different from the power on?

In addition to upgrading from.28 to.40 I also disabled Smart Connect and Carlo since none of my equipment is Arlo.
Message 303 of 321
0 Kudos
sir_bazz
Guide

And then there's also cases where 2 resets are required AFTER the upgrade.  How messed up is that.

I think what some people forget here is that when testing BETA versions, we're predominately looking at a new fimrware with the intent of providing feedback on bugs, errors or new features. We're not expected to be the troubleshooters as well...although I'm sure Netgear would appreciate the effort it if anyone feels inclinded to take that next step.

Actually AFTER is the right way to go. This is because the hard reset doesn't just clear the settings, it sets defaults into the settings. The only thing that can know what defaults to put in place for a specific firmware is that firmware itself. When something like the new Arlo support was added in 1.0.6, it needs a new area of settings for the Arlo functionality. When people reverted back to 1.0.4 without doing a hard reset, they reported that the Arlo SSID still showed up, even though it doesn't support it. This means that the area where the settings were stored for Arlo conflicted with what 1.0.4 knows about and caused phantom issues. Running a hard reset after loading the older firmware makes sure that sensible values are in the right places for that firmware version.

Actually AFTER is the right way to go. ...

When people reverted back to 1.0.4 without doing a hard reset, they reported that the Arlo SSID still showed up, even though it doesn't support it. This means that the area where the settings were stored for Arlo conflicted with what 1.0.4 knows about and caused phantom issues. Running a hard reset after loading the older firmware makes sure that sensible values are in the right places for that firmware version.

Either would do, clears out the OLD settings. Just to me, NOT knowing the code, before removes and problems for the new flash. I'm pretty sure the code that installs the new f/w doesn't clean out anything but just overwrites the code area and then basically reboots. That way whatever was in settings are used.

Again, not knowing the code I would 'assume' that the same specific addresses are use for ALL versions of the fw. Otherwise more problems would exist after installing if those settings addresses were to change. When new settings need to be added, they go to new reserved addresses.

Arlo problem could be very simple. That old recalled/deleted fw put the data in. Depending how the fw determines what SSID's to use it could very well be code that was written a long time ago and it had a planned expansion of more than 4 SSID's. It read a list at a specific location and if the data was NOT '0' it put out that SSID. That means the present 4 SSID are written to a buffer that the code expects to see the end of the list as a 0. As it reads it if non-zero, that SSID is started and used. After all, some, like me for instance, do NOT use the GUEST SSID's so only 2 come up on my router.

Again, without seeing the code this is ALL speculation and guessing how one would write the code.

All in all, I don't know 'why' any reset need be done, but if one could look at the code one could make a case with real data. Some code is probably available somewhere as 3rd parties have it. Looks like it is here, http://kb.netgear.com/app/answers/detail/a_id/2649/~/netgear-open-source-code-for-programmers-%28gpl... but the 1.0.4.30 file it seems can't be read?

There apparently is a just released new beta, 1.0.5.62, that specifically states it clears out the old Arlo settings possibly left over by a FW version that supported it.

I agree that the FW SHOULD do a better job when upgrading or downgrading to disable or clear out non-relevant settings, however this is exactly the problem, the FW was probably not taking into account different use models.

However, I reiterate that to be safe, unless overwhelming diffcult to do, the user would be safer to do a hard reset and reconfigure after changing FW to make sure it is more of a clean slate.

I have updated also.

I have question because i have two R7000 and on one of them i have icon of program Netgear  Downloader Beta. Can You explain me this ? 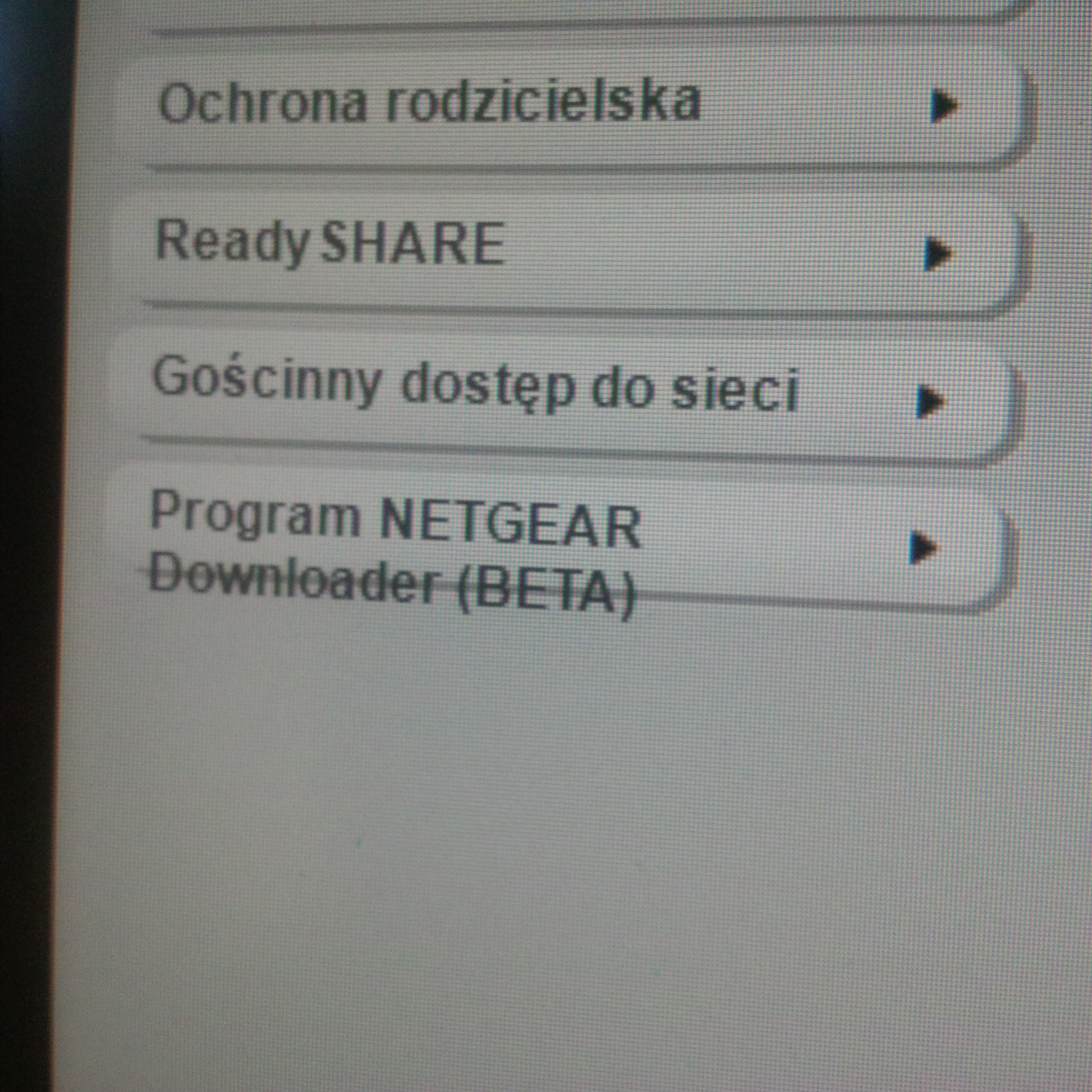 I updated two and now shows on both the same that is means is ok :

Will I loose all my port forward settings with this update?

Really nervous of updating this router as the past one killed the whole network.

If you are going backwards in release number you might still have them (that is from one of the older recalled beta's). However there is NO guarantee they will work. In cases like that you have to RESET the router and then re-apply manually your setting for proper operation.

If you are moving up from and older official release, like V1.0.4 or older you don't need to reset the router but it is advised. In this case I'd give it a try, have any problems, reset and re-enter is the first thing to try. DO NOT load saved settings from any other version into a new one. That seems to be asking for trouble these days.

Port forwarding configuration changed between 1.0.4 and later releases, so you DO need to reset after upgrading. But you are correct about not loading saved settings from a different version.
Message 315 of 321
0 Kudos

I had beta firmware. Should I do reset before this new update, because I install because reset ?

You may proceed with updating to the new firmware. If you have issues after that update, you may reset the router.

Many thanks 🙂 Works well now 🙂

Thank you for the feedback. You may close this thread by tagging the appropriate post as "Accepted Solution".

Message 319 of 321
0 Kudos
Retired_Member
Not applicable

How or where can i find or click on or tag accepted soulution? Im tired of all the emails...
Message 320 of 321
0 Kudos
JamesGL
Master

Click on the 3 dots icon on the upper right side of the specific post then select the accept as solution.