I have a Netgear R7000 router which I purchased 4 months ago.

Recently it has been dropping the wifi connection intermittantly which seems to be getting worse, which is really annoying when trying to download large files! Plugging in a network cable (via PowerLine plugs) works solidly with no dropout.

The WiFi will disconnect for a minute or two, during which time the internet, network devices and the router (192.168.1.1) are unreachable. This is happening on both 2.4GHz and 5GHz networks and is affecting two laptops (one running Win7 and one running Win10), as well as iOs, so I am sure it is a router issue and not a device issue. I have tried changing wifi channels to channels which are unused by other networks around here (confirmed using a WiFi scanner), but the problem remains.

Has anyone had similar issues before?

Try to reset the router to factory default and reconfigure it manually. Change the channel of both 2.4Ghz and 5Ghz.

If your device is D7000, I would suggest posting it under DSL modem.

Same exact problem and it just started a few days ago on previous version so I download and install the Firmware Version
V1.0.7.2_1.1.93 but problem still exists.   I have isolated the entire network back to the R7000 itself.  I am completely frustrated with this issue that seems to randomly drop the connection over and over again within seconds of connecting.  I have reset to factory settings and reconfigured only to have the same exact issue.   Oh and I have had my R7000 running for 2 years now and with no issues at all.  I was completely satisfied with this router and even refered others to it.  I am very suprised to hear of others having the same issue with differnt model.

1. Does disconnection happens on both 2.4Ghz and 5Ghz?

2. When internet is down, are your devices still connected to the wireless network or not?

3. Is the wired connection stable?

Hi James,
The disconnection happens on both 2.4GHz and 5GHz networks. iOs drops the connection after a few seconds, whilst Windows still shows the connection in the task bar but is unable to reach the router or any other network locations or the internet.

Try to reset the router to factory default and manually reconfigure. Test the connection. If still the same, try reloading the previous firmware and reset.

I'm having the same problems. Started two days ago and can't seem to find a solid solution.

I am "glad" to see that I am not the only one with this issue. I've had the R7000 for several years with no issues until about a week ago. The WiFi keeps dropping for no apparent reason. The broadcast goes to zero for several seconds, then it comes back. It is long enough to make webpages time out, downloads fail, and induce buffering issues on streaming. On my mobile phone, it will switch data from WiFi to cellular, then go back to WiFi when the signal comes back. I was on an older version of the firmware so I updated to the current version, but it makes no difference. This is definitely an issue with the router.

Last night I analyzed the WiFi signals around my house and changed the channels to less used ones, but that made no difference either. This issue has happened with both the current firmware and the one previous. I am on V 1.0.7.6_1.1.99 right now, and I live in the USA.

When it goes down, it usually happens on both bands. With an analyzer running, I did see the 5Ghz go down, but the 2.4Ghz stay up, but it only happened like that one time out of 50. The connections may or may not drop. It depends on how long the signal is down. It can be a split second or several seconds.

I do not have direct evidence of the wired connection going down, but I have noticed that my Xbox (wired) will time out now and then. I have been playing Battlefield 1 a lot recently, so this may be the Dice servers kicking me as opposed to my router failing.

I never upgrade firmware unless there is a fix I need or a security issue.  If I had problems like yours I would flash back to 1.0.4.30.  Try flashing in firmware version 1.0.4.30 and see if that works for you.  You will at least be able to determine if it is a firmware or hardware issue.

I am going to try an older version of the firmware to see. I did grab a screenshot of what we are talking about. This is a dip in the 2.4Ghz band. SeahawkAC is my 5Ghz and SeahawkGN is the 2.4Ghz. The rest of the stuff on the chart is from my neighbors. 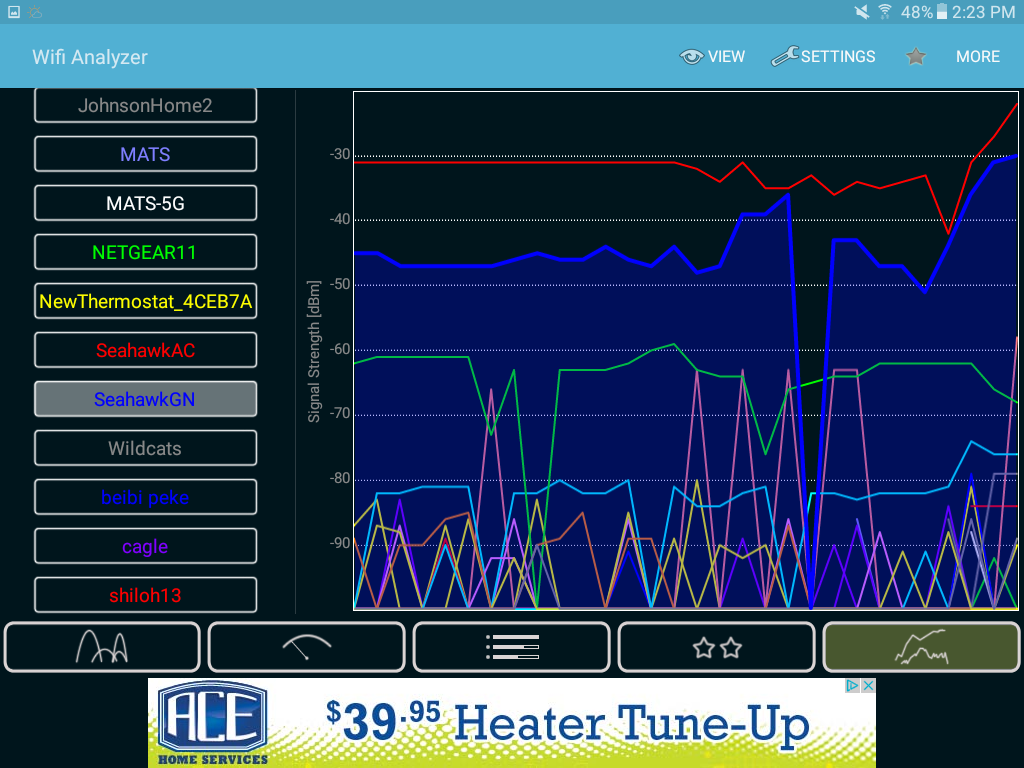 I ended up reaching out to Customer Support and they had me plug it into a direct connection outlet (vs a serge protector) and change the MTU size. I haven't had a drop on my laptop or phone but can't get the gaming consoles to see any of the WIFI networks now. Will update w/ more after some testing. Still monitoring the system as well. Have not changed to any previous firmware as of yet.

Having the same problems.. thought it was the crappy Netgear USB Wifi AC1200 (which has also had tons of problems).. replaced with a Linksys usb.  works better but still having drops.  I think it is the $200+ R7000......    Tried all the ideas.. reset, hardware reset, channels, my provider looked at it twice..

Netgear.... come up with a solution or should i just go with all linksys?

1. What is the firmware version of the router?

2. How many wireless devices connected? Are all of them having the same problem?

The router has been working fine for the past couple months since I have done this. I speculate that a cache or something was cleared in this process as all the settings I had before are now programmed in to the router. The only difference is that I get a continuous, strong WiFi signl all over the house with no drops.

I am still having the same problem. Wifi disconnects after about 2 days. Both 2.4 and 5ghz. I have tried the recommended channel changes, and a factory reset with a manual setup. Nothing seems to help. It dropped again yesterday. Had to reboot the router.

I have had the same thing. Purchased the router in Mid January 17 and worked for two weeks without issue. Since then it's a continuous reboot of the router. This A.M. can't even download a 48MB file without wifi crash.

What are the firmware version of your router? Make sure it is updated.

I am having the same issue where wi if is dropping from iPads and wireless PCs. Few is V1.0.7.12_1.2.5.  I getting very frustrating. Router is a couple years old. Sometimes a reboot fixes it. Some times it doesn't. Ready to buy something else I can depend on.

Not sure but my problem is fixed.. bought a new computer with a new wireless nic card installed, and also purchased a new Internet modem.  It may have been the modem that could not handle transfer rates.  The modem was supplied by charter.  I went out and purchased a Netgear Modem to connect to the 7000.  Seems to have cleaned up some of the random stuff.  That was after 3 months of fighting with the 7000 and the cable company who didn't think the modem was the issue.  try a new modem and maybe you will clean up the problems?

I have just installed a D7000 due poor wifi with my providers router (TalkTalk) and ongoing issues from line into property.

Wifi is so much better but the router, which appeared to work fine for a few days now keeps losing connection, it can be ok for a few minutes or a few hours.

My desktop PC is wired directly to router, this also loses internet connection.

As the D7000 has it's own modem I need to look at the router as being the problem... or it gets returned as faulty and buy a different router.

Still having the same issue. I updated the firmware to V1.0.7.12_1.2.5 ,   Since the update, I have wifi connection loss about once a week. Seems to be a bit better, but still unacceptable. I have to reboot the router to get wifi back.