Allowing the router to dynamically retrieve the IP and DSN seems not to have the issue. When I was having the issue I was manually entering the IP and DNS it wasn't until I limited the DNS to 1 entry did the issue go away (and of course allowing them to be retrieved by the ISP)

I also reboot the device every week or so. Which bring up my the issue of using the device as a media server. When rebooting the R8500 does not remount the USB chip I have plugged into it. I have to physically remove the chip and plug it back it for it to work.

However, it turns out, I do actually get those DNS errors sometimes even with .144, but it's temporary, it shows that error in Chrome for a second or two and then the page I'm trying to get to then does load.  With .154, it wasn't re-loading and it was also happening in Firefox, not just Chrome.

Now, I do use a different DNS server than my ISP, and I did have both a primary and secondary set, but I just went in and took out the secondary.  We'll see if get that DNS probe error again at some point with .144.

I guess the question for everyone fighting this Netgear bug, does everyone have manual DNS settings?

Well, that didn't take long, still got the brief DNS probe error screen in Chrome, on one of the usual websites where it happens.


Well, that didn't take long, still got the brief DNS probe error screen in Chrome, on one of the usual websites where it happens.

I don't really want to try .158, because I doubt it fixes this DNS bug, but more than that, CISA has listed three more security vulnerabilities that aren't yet fixed:

r8500_firmware NETGEAR R8500 1.0.2.158 devices allow remote authenticated users to execute arbitrary commands (such as telnetd) via shell metacharacters in the sysNewPasswd and sysConfirmPasswd parameters to password.cgi.

Well thanks for this post.  It just about settles it for me.  I need a newer, more secure router.

I have suspected the router was being accessed and updated/reconfigured but I dont get anything but DHCP activity in the logs which in itself is an indicator.

I have thought about placing a pfsense or sophos between the router and cable modem but thats just dressing up a pig IMO.

Yes,  I had similar DNS problems, struggling for months.

My solve/resolve tied back into ENABLING IPv6 under the advance settings.  See my thread below

Hope this helps you!

NG pending actions: NG engineer team is aware of the problem, they are working on it. It does take some time for development and testing. In meantime, users can try enabled IPv6 to see if this corrects the DNS problem or revert back FW to what was working.

@FURRYe38 appreciate the reply.  Just for reference here, this post was started 8 months ago with no response from Netgear so patience hasn't been the issue, but thank you for the update.

Changing IPv6 settings sounds like a possible workaround, however I had another idea for those about to throw in the towel.  You can try installing DD-WRT.  I haven't done this myself yet, but I probably will to test it out before I sell it.  Supposedly DD-WRT really enables a lot of features on this router.  If you're confident in making backups and flashing the firmware this is another possible option to breathe some life into this device.  Interested in knowing what some of the results are.

Ya NG is aware and were hoping that this will be fixed and seems like a slow process.

For now, user can try IPv6 work around.

One user has given feedback that there still seeing it though would need to get a bit more information.

For any DD-WRT, users will need to refer and post over on the DD-WRT forum in regards to there FW.

DD-wrt lowers the wireless speed to max 600 mbps and is a ball of confusion!  Not an option IMO.

R8500 and R8300 firmwares are exactly the same, downloaded both, and ran cmp byte-to-byte compare. There is no difference.


R8500 and R8300 firmwares are exactly the same, downloaded both, and ran cmp byte-to-byte compare. There is no difference. 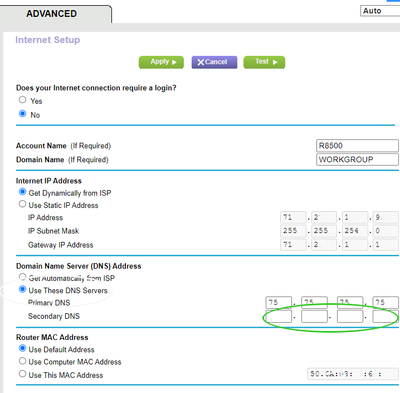 in 158 I had to remove the secondary DNS server. I will post what the actual error