Ive just installed my new AX12 router in the same place as my old R7000.

The only thing ive changed is the SSIDs to what I had before so all network devices can work again.

(I will change this at a later date).

Everything is the same except the router.

I have a BT FTTP connection with a fibre modem in the house downstairs.

I am in the upstairs office about 6/7m from the router.  (Its a new build house so wood walls).

I used to get a constant 270Mbs download using SPEEDTEST app on a MAC.

I was expecting this new router to be at least the same out of the box, or am I missing something?

Surely only the WIFI has changed not the internet speed?

(This is in the same upstairs office about 6/7m from the router).

It wont even pick up one of the 5G channels its so weak.

I was expecting this to deffinately be better than before

I am hoping I am making some schoolboy error somewhere.....

I will start to look around on hear to see if anyone else has had problems.

I just didnt expect to / or want to have to start looking at tweaking channels and checking interference with a much superior product.....

Message 1 of 23
Me too
0 Kudos
Reply
plemans
Guru

What wireless card is in the mac?

Have you tried changing the channels the rax200 is on? Maybe theres interference on one.

have you tried speedtesting on each of the 2x 5ghz bands? and not just one?

Hi,
Thanks for replying so fast.
Its all default setting at the mo.

Have you tried changing the channels the rax200 is on? Maybe theres interference on one. - Not yet

Ive got WIFI Explorer and I’ve added a screen shot below if that helps. (I dont really understand it all)....
My printer seems to have a stronger signal than my 2.4G network?

have you tried speedtesting on each of the 2x 5ghz bands? and not just one? 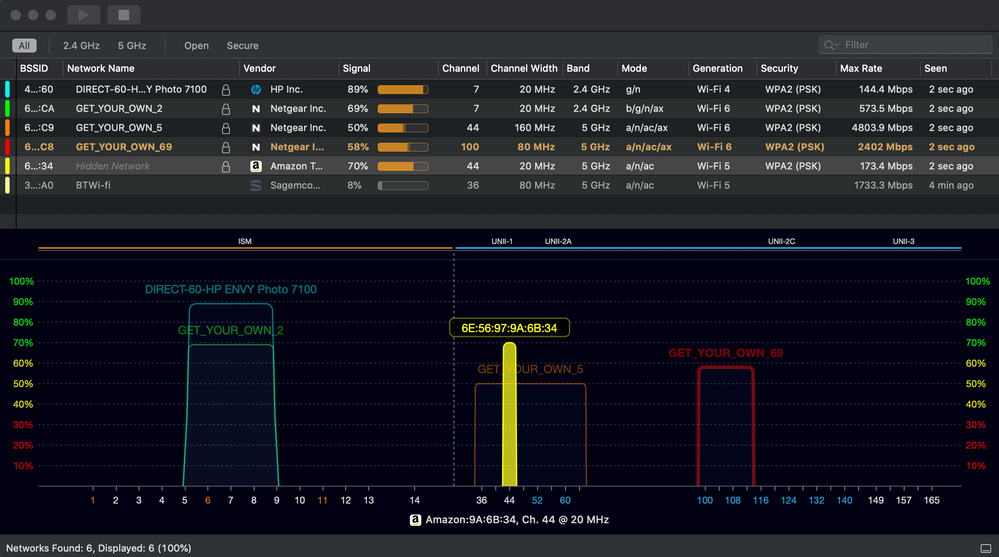 and now hopefully with screen shot 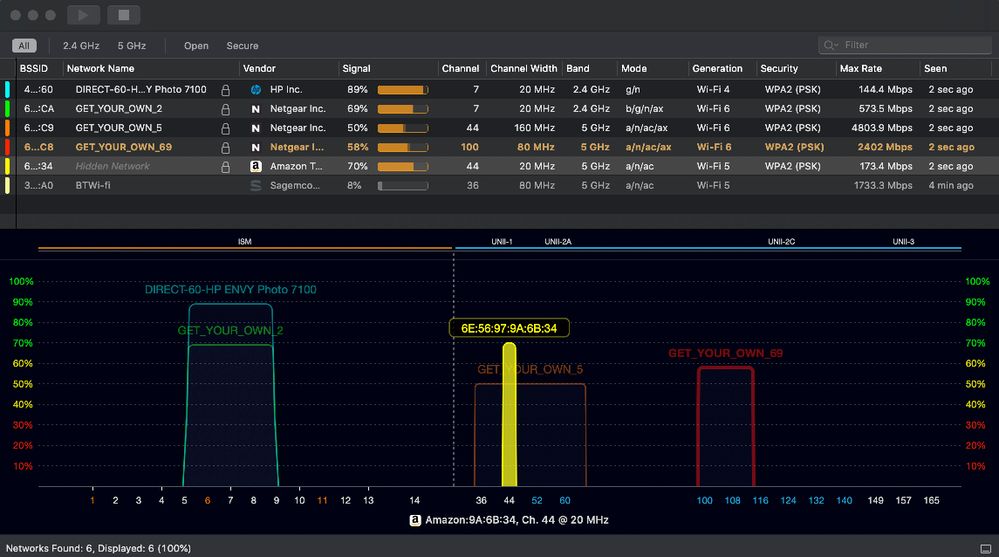 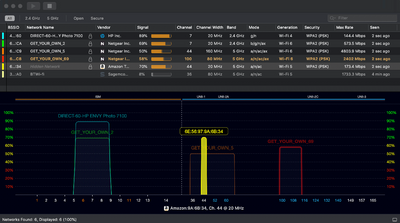 Ive just tested the speed on the PS4 in the same office upstairs next to my MAC using the 5G network my mac is slower on.

Photos have to be approved by a moderator. right now only the first one is showing.

And thats in a 4x4 configuration. most wireless devices are only 2x2 antenna devices. Meaning your link speed would only be around 300mbps.

You can set the higher band up.

Not sure why the lower band is only broadcasting at 20hz wide.

What firmware version are you on?

nevermind. was looking at the wrong network 🙂

but try setting it down and changin gthe channel its broadcasting on.

If your area is not congested, on the WiFi settings, uncheck the 20/40MHz coexistance setting for the 2.4GHz band. Newer netgear routers have been more willing to drop to 20 MHz channel width when overlapping APs are detected. While it is useful if the overlapping APs are highly active. If they are not very active where you will end up with a ton of airtime sharing issues, then you will notice a near doubling of the performance on the 2.4GHz band.

For 5GHz, it should be significantly faster, The RAX200 with a 2 stream 802.11ax client, is able to deliver a real world throughput of 1.8Gbps to 1.9Gbps on a 2.4Gbps PHY rate. Furthermore compared to the R7000, it also has a significantly higher transmit power on both the 2.4GHz and 5GHz band. Beyond that, one area that Netger does well in, is improving receiver sensitivity and minimizing self-noise, thus maintaining higher speeds across a given range (less of a dropoff), thus even in those cases, performance still improves.

The one exception, is if you use DFS channels, If you do not have any devices that support 160MHz channel width on the 5GHz band, then change the WiFi mode from "Up to 4800 Mbps" to "Up to 2400 Mbps", this is because in the US the FCC unneessarily restricts any transmissions that enter the DFS range to a max of 250mW instead of the normal 1000mW. That will cause the router to use 80MHz channel width on the 5GHz band, which will allow it to avoid the use of DFS channels.

Are any of your WiFi radios able to use channel 149?

How is the 2.4GHz performance with 20/40 MHz coexistence unchecked?

Which country was the router purchased from? It seems like you have not tried 80MHz channel width on a non-DFS channel yet. Are you in a region where there is no 80MHz block of spectrum available?

Beyond that, when it is sett to up to 4800Mbps then it is using 160MHz channel width which will force the use of DFS even if the primary channel is out of the DFS range.

While in smaller homes and close ranges, DFS can work well, there are exceptions such as environments with a high noise floor where having your transmit power cut down to 1/4th power because of DFS can be an issue, as well as environments close to an airport where where they will be constantly flooding the DFS spectrum.

If a device was purchased in the US, a good way to rule out such issues is to set the router to the up to 2400Mbps setting, and then have it use channel 149 (in the case f tri-band routers, give the upper band radio a different SSID to ensure that you are using the the selected channel when testing, then seeing if there are any throughput issues.

For the 1GbE WAN port, the max real world throughput is around 941Mbps due to overhead.

Router was purchased in the UK.

Im about 30miles from a small airport in Southampton.

I will be honest and say I have no idea about DFS.  (I will have to readup on it next).

The router has still got pretty standard settings apart from the SSIDs.

When I changed it back to 44 I didnt get a popup?

I just stupidly thought that this new router would out perform my old one out of the box without all this nonsense.

Hopefully I will get it sorted and only have to do it once.

Ok. DFS channels actually come up in Blue on my scanner.

Does anyone have any other ideas please?   I'm getting desperate before sending it back.

All speed tests are done on my MBP in the same place, an upstairs office/Bedroom 6/7m away from router downstairs.

My neighbours 2.4 network is stonger than mine????? This isnt right!

Looks like I have purchased a dual band router for the price of a Triband, which is no better than my 10 year old R7000 wahoo, go me!

Im starting to switch all other WiFi equipment on and to be fair there has been no issues.

Have you tried an older firmware?

You can try downgrading the firmware and testing that.

Does your MBP have a AX card in it?

802.11n clients do not get much of a performance boost over what was seen with the enhancements made to 802.11ac routers.

On 2.4GHz, iimprvements were seen with 802.11ac and ax class products, 802.11n products remained the same, and 802.11g clients have not had any noticeable improvement in years across any major brand.

Is using mixed device setups, the main improvements that you will notice with Netgear, is improved airtime sharing where a mixed setup of 802.11ax, ac, and n devices, will have lless of a performance hit as compared to older routers, thus aggregate throughput remains much higher than used to be possible with mixed use.

The performance issues you are facing are certainly not normal, and usially such a large upgrade would offer people a massive performance boost.

OP, I wonder if you've received a lemon RAX200? I'm also using a RAX200 on a TalkTalk FTTP Fibre 900 line and the RAX200 is the best router I've ever used. I'm getting 800+Mbps over wifi 6 almost anywhere in the home (new-ish double storey) and even wifi 5 clients give me around 600 Mbps. These are the settings I'm using:

Enable OFDMA ON (all)

Try the above settings. 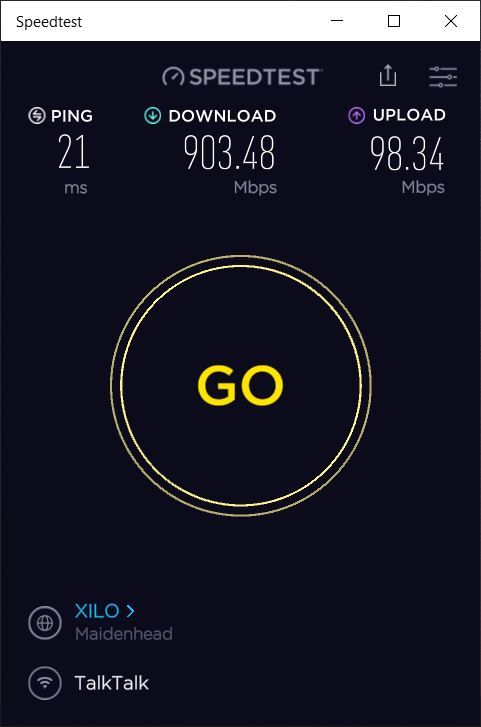 Hi,
Well that didn’t go well, I’ve now lost my higher 5G2 network.
I turned on:
Enables Mu-Mimo  - Was Off
Enable OFDMA ON (all) - Was Off, turned on for all 3 networks.
Enable Beamforming - Was On out of the box
I bounced the router after changes.  No improvement and 5G2 gone!
I have reversed all settings back and bounced the router.
Still no 5G2 network…..  I wanna cry  lol
WTF is wrong with this thing…..
Cheers,
Des.
Message 19 of 23
0 Kudos
Reply

I will add the settings one by one and wait 10minutes this time.

I will either find what caused it, or work out that I was being impatient because of my frustration....

Ok, I made a bunch of changes as previously mentioned and nothing has changed in strength or performance on any network.
I dont know what else to try and getting to the end of my patience.
If anyone has any other ideas, please let me know.
—NEW CONFIG—
2.4G  - GET_YOUR_OWN_2 - Ch: Auto - Upto 1200Mbs @ 20Mhz - Strength = 56%
5G1  - GET_YOUR_OWN_5 - Ch: 48 - Upto 4800Mbs @ 160Mhz - Strength = 50%
5G2  - GET_YOUR_OWN_69 - Ch: 128 - Upto 2400Mbs @ 80Mhz - Strength = 60%
UPnP - Turned Off.  - Was having problems with this on last router R7000
Enable Mu-Mimo - Turned On - New
Enable OFDMA ON (all) - Turned On - New
Enable Beamforming - Turned On  - Out of the box
Enable AIRTIME FAIRNESS - is Off - Out of the box  - Going to turn this on next.
My SONOS is also struggling with what I think is buffering now, just listening to the radio today after turning it on and the music keeps speeding up, cutting out and stopping.
SONOS has always been rock solid on a previous virgin router and on my old R7000.
I will start using my NAS drive tomorrow and see how that works…..
Notes:
Im starting to think I am not going to get better performance than my old R7000, but I am hoping it can handle a more devices better.
Most of my equipment is old, I dont think I have anything with ax tech in it. I am wondering if this is a problem?
Its been mentioned that old equipment could be overloaded.
I will also try some tests closer to the router tomorrow to see if anything improves.
Cheers,
Des.
Message 22 of 23
0 Kudos
Reply

Probably a silly question, but have you correctly fitted the 'wing' antennas? From the folding position, you push out the antennas and then push them down gently until they click into place.

Can I ask if your RAX200 is out in the open and not in an enclosed space such as a cupboard or utility space? Even the best router in the world will perform poorly if its signals aren't being properly propagated.

As a last resort, I suggest returning the RAX200 for a replacement as you may well have received a dud - if bought via Amazon then it should be very easy to do. Whilst the R7000 is/was a great router in its heyday, the RAX200 should blow this away for speeds, even on older wifi 5 clients.