getting occasional wifi dropped connection on IOS also on .18 which did not happen on .16
Message 26 of 42
1 Kudo
Reply

So, I have a bit of a strange issue as well. I have a 2016 15" MacBook pro that is brand new. Works perfectly everywhere else and if I recall, worked perfectly fine on .16 FW, but when I am at home on my Orbi network, it crashes the WAN port on Orbi. If you give it a few minutes, the Orbi will recover and go back to having an internet connection, but will continually drop throughout the use of the laptop. I have also noticed that when it says that internet is connected you run a speed test and I am getting anywhere from 150-350ms pings from any device on my network. The second I take the laptop offline, everything goes back to normal. I have attached the error message I see on the WAN port after connecting the laptop to Orbi.

I also verified it was connected to the Orbi router itself, strangley enough I could never seem to get it to connect to the Satellite device. I believe I am going to try and downgrade FW and see if it changes anything.  Everything computer, phone, tablet, streaming device in my house is Apple and so far this is what I have narrowed it down to. 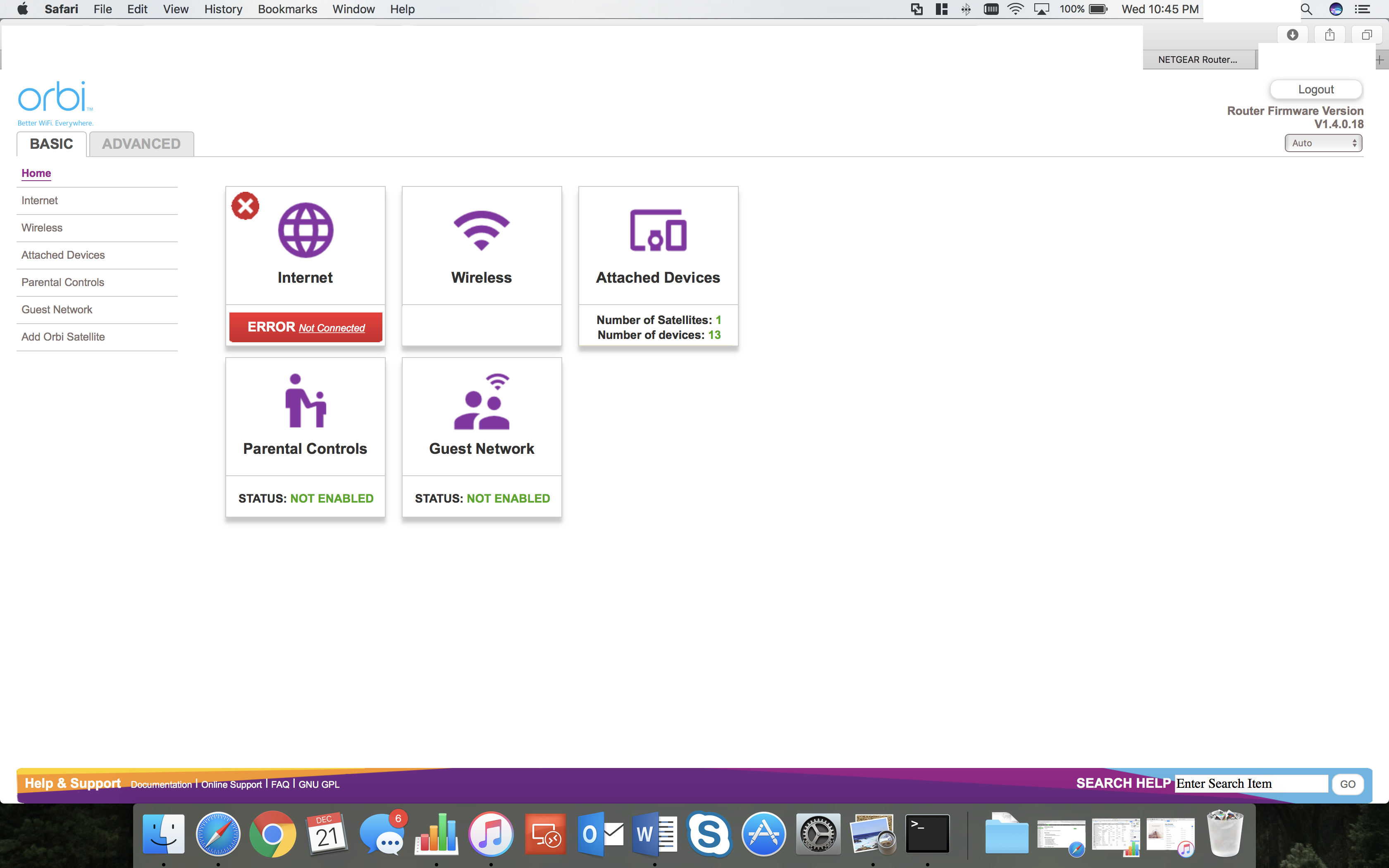 Downgraded to .16, have been using for 10 minutes or so and haven't seen it drop yet, however, the ping response times are still ridiculous compared to my other devices. Still in the 100s while other devices are kicking out 15-19ms.

So, scratch that. Still crashing the Orbi system on .16 as well. As soon as I opened my laptop, I loaded one page and the WAN port went back down. I went through and removed the WIFI adapter from network settings, applied rebooted and created a new one, still having issues. Ping response on laptop is back to 291ms while on iPhone 7+ it's 20ms that is me testing with the iphone and the laptop next to each other. I have a spare linksys router, I will try and set it up and see if I have the same behavior.

Even if it is the laptop adapter, seems odd that Orbi allows it to crash the WAN port. 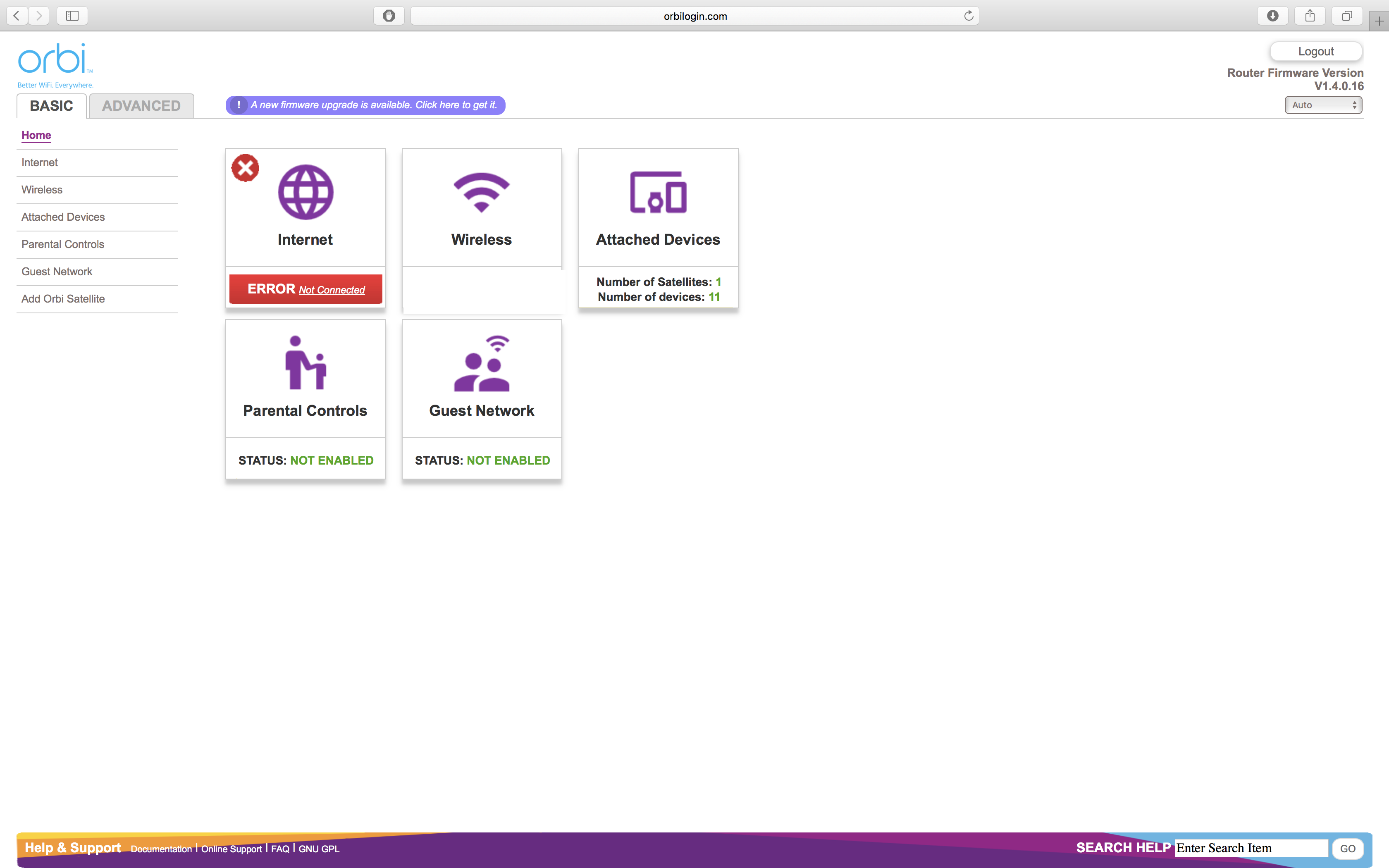 You may want to factory reset the Orbi the WAN port should not be crashing like that.

.16 had zero issues with speed now with latest multiple wireless devices seeing considerble slowness, iPads, iPhones, Sony Xperia z4 tablet, I can reproduce this on demand have gone back to 16 and speeds are awesome on all wireless devices and then upgrading to 18 with factory reset speeds on all same wireless devices drops significantly seems like a bug got introduced? Or QoS Issue?

Both main and satellite when on 16 after factory reset have excellent speeds then after a few days I go to latest 18 and factory reset speeds drop by a lot on exact same devices same settings there is something not right with the latest firmware, hope next version will address this issue it is critical issue $400 I paid not for drop speeds

So my firmware would not update automatically.  I updated the router manually.  Now, I can no longer access the orbi login page.  I can't confirm the update and cant update the satellites.  What gives?

I just bought an Orbi system, and updated to 1.4.0.18 during the setup process. Now that I have everything set up, I'm getting really good wifi speeds, right up to the limit of my internet connection (about 120 Mbps) even down in the basement where my Roku and Apple TV are. Very happy about that!

One glitch that seems fairly consistent. When I log into the admin web site from my iMac (connected by ethernet to the Orbi base station, with a static IP address), most admin functions seem to work fine. But when I try to view connected devices, quite often I get an error that I am currently logged in from another device. I'm not. I also sometimes get an error that there is another device on my network with the same IP address. But again, there is not.

This only happens using the web interface. The Genie app is able to see the connected devices without any errors.

This is a odd issue is it just on your main PC or any device when using the web login?

I solved the problem by changing the static IP address of my computer. Not sure why that fixed it. But I have a hunch.

I originally set up the Orbi from this computer, connected to the router by ethernet, with a static IP address of 192.128.1.250 ... And almost every time I tried to list the attached devices in the web interface, I would get that message about another device being logged in. Other pages in the web interface seemed okay. When I used another computer on my network, also connected to the router by ethernet, but with a different static IP address, no problem.

So I tried changing my IP address to 150, then later to 251. I have not had that problem since. So I wonder if setting the router up with a computer with a static IP address caused some kind of problem where the router remembers that IP address, or creates some process using that IP address, which then conflicted with my computer's IP address. Because, along with this error, I would sometimes get an error from my computer saying there was another device on the network with the same IP address.

So seems like some sort of glitch in the firmware possible related to initial set up from a computer with a static IP address.

So, I actually left on vacation while the problem was occurring, came back on Monday and haven't had the issue since. The only change was me leaving for a few days and coming bak. I am monitoring now and will update if it reoccurs.

I don't know if it is a typo or not, but I wouldn't recommend using the 192.128.x.x as an IP range. This is technially a public range, I would move it to a private range "192.168.x.x". In the off chance that you start coming across webpages that are hosted in the 192.128.x.x space, you would find yourself in a problematic situation of not being able to access those sites, as it is going to send you to your local addresses instead.

Seems to me that 1.4.0.18 release is not stable for iOS devices too many instability issues with this Firmware and iOS based devices,  the 1.4.0.16 was more stable, lets see what Netgear does in the next Firmware to address this instability.