Looks like new Firmware just released today 1.4.0.16 anyone taken this yet? I will as soon as I get some time today hopefully it address frequent random wireless drops.

Not seeing much else that I can tell.

Yep just upgraded, guest network access is now available that is the first thing that stands out along with adding another Orbi satellite to the system.

Under advanced wireless settings, I don't recall the wireless stuff and resetting the backhaul password to be there before was it?

i assume you guys got this via auto update ? as its not on the web site as yet

The release notes for the new FW

Anyone else having a few issues?

I have a wired device on my satellite that does not show up on attached devices, but it is getting to the internet.

Access Control I have 3 devices that are showing blocked and I can not get them to be allowed. I choose to allow them and they still come back as blocked.
Message 7 of 55
3 Kudos
Reply
GadgetGuy
Apprentice

Just upgraded my system and guest network is working. Thanks Netgear for listening to us.
Easy setup. Did the upgrade sitting in the couch from my iPhone.
Message 8 of 55
1 Kudo
Reply

It shows that there is an update, but does not allow me to update.  Can't even do the update manually as it is not available for download yet from the site.  Any advice?

I received my Orbi yesterday. Satellite would not connect unless sitting next to the router. I downloaded the firmware updates and it works great. Just kinda ticked they sent them to me with the original firmware installed. Auto download wouldn't work either. Had to go to Netgear website and manually download and install. For $400 they should be working when they arrive!
Message 10 of 55
1 Kudo
Reply
JMU1998
Luminary

@Dan4th1 wrote:
I received my Orbi yesterday. Satellite would not connect unless sitting next to the router. I downloaded the firmware updates and it works great. Just kinda ticked they sent them to me with the original firmware installed. Auto download wouldn't work either. Had to go to Netgear website and manually download and install. For $400 they should be working when they arrive!

seeing as you dont buy the orbi direct from netgear the state of the firmware will depend on when the supplier got their shipment as to what level fw it will have , dont forget the orbi has come a long way in a very short space of time both hardware and firmware wise

the autoupdate feature was a bit problematic in some early fw and is why you had to manually update it but from now on any new releases will appear in the web gui when you login and prob update for you behind the scenes , me i would prefer if you could tick a box to not have it do it automatically and instead choose when its done but that just my geek side not liking big brother messing with my stuff

i have had this fw for a while now and for the most part its working fine here , kids are happy wifi is happy so im happy

other features like ethernet backhaul i cant see anytime soon , however seeing as the firmware is basically open source you might find someone taking interest in developing 3rd party firmware that may in time allow such other features , its not like the orbi is short of ram

what needs to be acknowledged is how far the orbi has come in such a short period of time esp being a new class and type of technology not seen in this form before so no prior knowledge to base it on , it was only 6 months ago that the orbi started its beta trials and now its main line and working well in the wild  , in tech terms thats pretty dam quick

I'm concerned the new firmware update has bottlenecked my Orbi network. Before I was getting 90-170mbps since the update. I'm barely seeing 10-25mbps. Has anyone else witness this? I've rebooted. I assumed my network switch was incompatible so I unplugged it and immediately saw my original speeds come back, but minutes later goes back to the same slower speeds. I'm wondering should I factory reset with the new firmware and see how that works.
Message 14 of 55
1 Kudo
Reply

@randye I have not seen this issue since I upgraded yesterday. I am setting my full bandwidth of 100mb. I also have tested my HTPC write connected (2gb trunk) to the satellite and my laptop on wireless and I get about max of 300-350mbs.
Message 15 of 55
0 Kudos
Reply

I'm seeing the same thing, randye, but only on the satellite. Previous download speeds ~230mbps just now anywhere from there to ~130. Different tests are all over the place. Maybe too many black Friday shoppers!

I'm making a guess that the band steering enhancement is possibly my issue. There was a thread or post stating that Orbi has a problem switching from 2.4Ghz to 5Ghz and vice versa when a device is near a stronger/weaker signal.

I saw none of these low speeds until the new firmware arrived.

@randye I agree I would start there as I saw poor performance on earlier releases with it enabled. Interesting enough my mobile has not been able to get 887mb wireless (585mb 10 feet from satellite). So I think it is having some issues.

@randye. Under advanced>wireless it is at the bottom and I believe they call it "Implicit Beamforming". Uncheck it to turn it off.
Message 20 of 55
0 Kudos
Reply

Thanks @Pesto242. I checked there and it was actually disabled. This is perplexing. I hope someone from Netgear's team will chime in and offer some help. I'd like to do a process of elimination and downgrade to the previous firmware.
Message 21 of 55
1 Kudo
Reply

Called Comcast my ISP for an explanation or to see if they have been throttling back my speeds as I have been speed testing a lot. The "tech" support person was of no help. Now I've returned back to v1.4.0.16 a bit frustrated wondering why my speeds have gone down significantly.

I wouldn't care if I was getting 70-90mbps consistently, but when you can not crack a 10mbps ceiling when you're paying for 150mbps and you just spent $500+ on a new mesh network. You REALLY want answers (looking at Netgear). Hope something good surfaces soon.

Can you test 2 PCs on your wireless network? Have 1 on the router and other on satellite. Test the speed. If that provides over 200-300mb (I get about 350 limited by my surface) then disconnect orbi and directly connect a pc to the Comcast modem and test the line.
Message 23 of 55
0 Kudos
Reply
djc6
Luminary

On the latest 1.4.0.16 firmware you can run a speed test from the Orbi router itself. 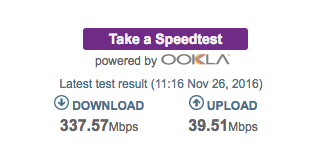