After recent Windows 10 update, I can't log in to Genie app

I recently got a new build of Windows 10 and Genie app no longer worked.  Prompt said it was incompatable.  I uninstalled the app with a utility that removed all evidence of the prior version (Revo Uninstall) and downloaded v2.4.44.  Everything came up fine but I tried to get to my guest settings on my R6210, my log in failed (wrong password) using admin and "password".

I removed the app again, did a factory reset router (disabled modem, held router reset button for more than 10 seconds, and updated Router firmware) which I felt would give me the ultimate start from scratch point.  Again, when I got to  my guest settings the login failed again (wrong password).

Is there a way to reset the passwrd in the genie app?  I tried using all of my other Netgear 'MyNETGEAR' account credentials and my router access access and Password information and I just simply get into the router settings without using the 198.162.1.1 address through my browser.  I really appreciated the ease of using the Genie app to make changes as needed.

I'm very good at electronics, but not so good at the software end of things and this is driving me nuts.  Can anybody help?

Bad move. Those "helpers" can do more harm than good.


Everything came up fine but I tried to get to my guest settings on my R6210, my log in failed (wrong password) using admin and "password".

If the genie works, this is a sign that there is probably nothing wrong with your installation.

Many experienced users prefer using the browser interface. They also prefer a wired connection over wifi.

If you cannot login to your router | Answer | NETGEAR Support

By the way, there are several "genies". I assume that you are talking about the desktop genie for Windows and not some mobile app.


Is there a way to reset the passwrd in the genie app?

When you factory reset the device, it goes back to the default settings. That includes both the router access password and the wifi passwords. Remember to use the right one when connecting to the router's controls.

As I indicated, I did a factory reset and the router works fine.  The genie app (yes, for windows) also works fine EXCEPT I can't log in to the genie app to access to Router Settings, Network Map, Parental Controls and Ready SHARE because the default password doesn't work in the app.

I can get to them through the browser, but it is a real pain compared to clicking on the Genie app shortcut.

The reason I used the "helper app" (Revo Uninstall) was because, using the regular uninstall method left all kinds of data behind that made me think the original app that worked in the previous build of Windows 10 was causing my problem, the Revo app got rid of all those residual files, leaving me with a clean slate to download and set up the new Genie app.  1.There is either a bug in the 2.4.44 preventing the default password from working in this system (Windows 10 home, Build 16299.309) or 2. The old Genie app that worked fine under the previous build, left residue behind Revo didn't find, causing the problem.

Netgear support doesn't seem to be interested in problems with the app as there is no way to communicate with them about the app or to report a problem (such as reset the password), which is why I'm asking the community but I don't you either didn't read to entire post or somehow didn't grasp the problem I reported both in the body and heading of my post.  I simply either need the correct default password or be given a mechanism to reset it. 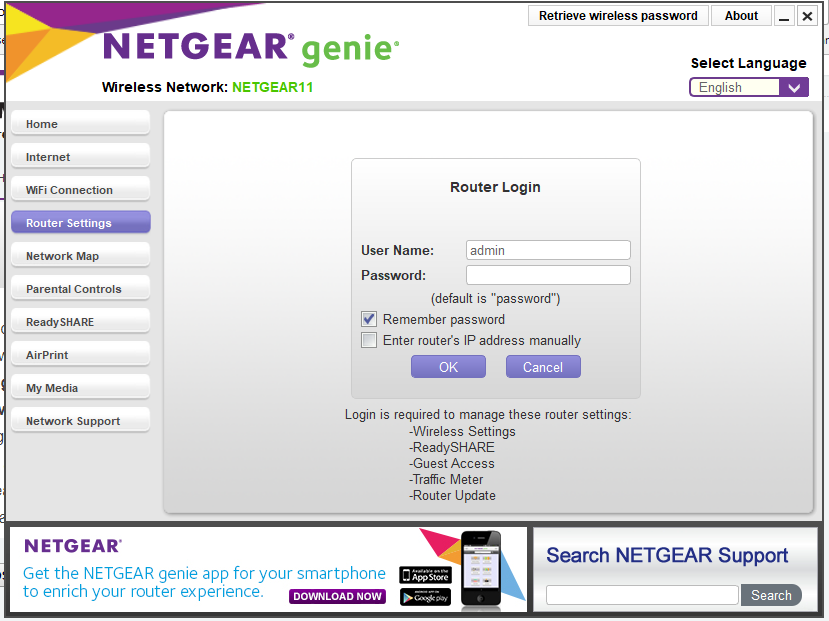 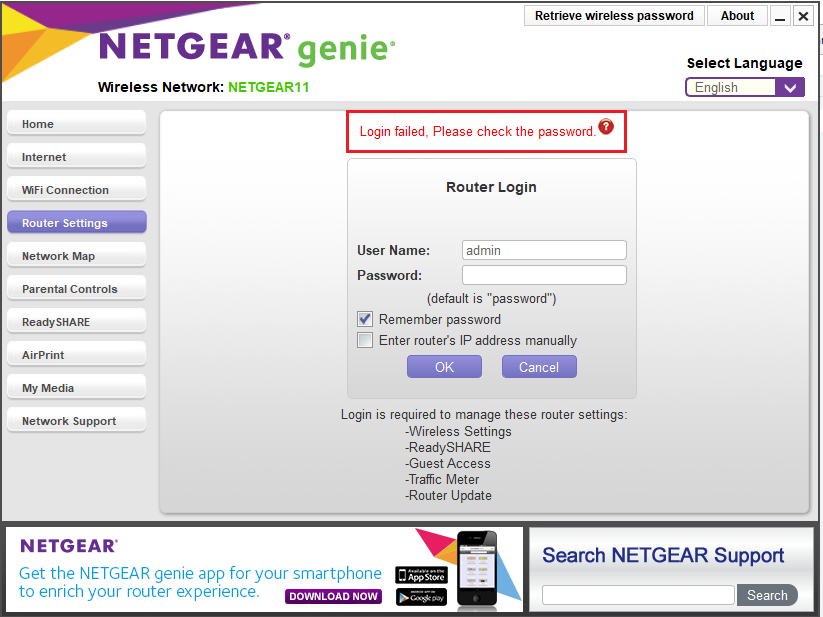 The latest version of the desktop genie for Windows is 2.4.54.

I just upgraded to 2.4.54 and have the same problem with not being able to sign on to my router with the password I have used with genie for over a year.  Interestingly, I found that I could recover my password (because I thought I forgot it) and could use the www.routerlogin.net address and recover.  see article https://kb.netgear.com/24220/How-do-I-recover-my-password-on-my-Nighthawk-router.  I reset to the default password and still can not use genie.

Has anyone overcome this issue?

You refer to the genie. This could be one of several things, the browser interface, a Windows or Mac application, or an Android/iThing app.

I have seen no change in the function of the Windows desktop genie after the Windows update. I have found that Edge no longer gets into this forum.

My upgrade was for Genie desktop. The genie desktop version 2.4.54. That is when I started with issues with the router password not working in the genie desktop software. I am on Windows 10 but have no reason to believe the issue is related to Windows.
Model: R7300DST|AC1900 DST Router and DST Adapter
Message 7 of 8
0 Kudos
Reply
Highlighted

I agree. Not Windows. But that version works fine here.

But what do you mean "router password not working"?

I find that the genie will not remember the router's password. I have to enter it manual every time. But that works.