SXR80 VLANs can't talk to each other- Inter-Vlan Routing?

Netgear does define each network in LAN Profiles, when I have it right there are five [V]LAN profiles preconfigured. Here you can control Client Isolation (that's between the wireless clients but on the very same SSID only), and the Network Isolation.

This is different from consumer Orbi and the AC Orbi Pro or many consumer routers allowing multiple SSIDs to connect to the same network and doing more or less nasty L2 tricks/filters what is controlled by these network or client isolation controls.

Not sure which manual you are referring to, but page 122 on the manual for my gear (Ax6000) it is troubleshooting.

It sounds like what you are saying it that you cannot allow the employee SSID talk to anything on the wired network (other than the internet) unless you specify that port on the device. So, it is relatively worthless if I have more that 253 devices on my network. The whole reason I got this was to enable more than a single class C worth of devices to talk to each other.

The system also does not support wired backhaul. I tried, and the device I plugged into the wired network (sat 2), refused to accept any wireless connections. Broadcasted the SSIDs but refused to do squat.

I really can't imagine a use case for these devices with no ability to communicate between SSIDs. Imagine, you put all your Google assistants and X10 gear on the IOT SSID... then nothing can stream or screen cast. I have to imagine I have something wrong here, because it would be nuts...  maybe if you were a landlord providing free wireless to three companies, but I can't imagine anything else.

Typo, sorry - p.112. CTRL-F for the mentioned title would have helped.

But before please read my reply on the X10 thread.

Of course it does support a wired backhaul - it's part of the spec. Just like it does support one LAG by device. Just like the ability to enable routing (unluckly naming by Netgear "Network Isolation" but you specifically asked for this, correct?) between the subnetworks, but no granular control - but that's all you want. And be ware it's just IP routing ...

But then considering that everything is on VLANs it can't be thrown onto each and any smaller or bigger wired network - the different subnets reside in different networks and different IP subnetworks.

If all you expect is a flat and more or less unstructured network as you have with the two X10 (nice machines - but unfortunately not very well maintained by Netgear...) allowing more then a single class C amount of hosts - yes, the Orbi Pro WiFi 6 is the wrong device. And count in any other Netgear consumer routers - which are all limited to a /24 subnet why ever.

Don't blame the messenger ... I can't change the world.

Welcome to our community! 🙂

I would like to know if you were able to follow our VLAN setup guide in the following articles?

- How do I create, configure, and assign VLANs on my Orbi Pro WiFi 6?

It would be best if you may share more information about your network topology. May I know if the SXR80 is used in router or AP mode? What testing have you done? Does the network isolation on/off?

I'm looking forward to your reply.

My topology is pathetically simple. I have the modem from the cable company, which is plugged into the WAN port on my main Orbi. That device plugs into a JGS516PE which has no VLANs setup at all and is the default out of the box configuration.  That switch has wire devices on it. All those devices should be 192.168.1.0/24 DHCP from the Orbi.

The next hop out from that switch is another JGS516PE downstairs. I had to set one port to 100meg full duplex because otherwise my Playstation over powers the Internet. With that one exception, and the management IP set to 192.168.1.6, it has the default configuration as well.

Here is how my ORBI is setup.

Wireless 1  Nothing really to configure. Can't split the 2.4 and 5GHz so it is named Admin and unused. VLAN Default (1)

I tried to plug one of the satellites into the downstairs switch. It pulled an IP but despite being setup for SLOW, and FAST, no devices every connected to it. I set the other one about midway between the two, and it connected with good strength. I ended up pulling the plug and rebooting the one that was wired, and it ended up with a good signal after rebooting everything.

All ports on all Orbi devices are setup for 1 (default) Trunk  Nothing is wired except the cable from the Internet provider's modem, and the connection back to the the network from the main Orbi.  Client Isolation and Network Isolation are disabled for VLAN 1 & 20

With this configuration, I am seeing wireless devices connected to SLOW and FAST pulling both 192.168.20.x AND 192.168.1.x addresses. Even after I have rebooted them. This makes absolutely no sense. (no they are not static IPs).

I am going to factory reset the devices and start from scratch. Here is my plan-

This way, my IOT devices that can't do the auto 2.4 / 5GHz thing will have the SLOW network, and the rest can fend for themselves on the FAST network.

I think the above will eliminate the majority of my issues.  However, it doesn't solve my wired backhaul issue. What exactly must I do to be able to ideally use one device connected via wire to the downstairs switch, and the other wireless?  I assume the wired one will forever show up as disconnected even if I do get it to work?  There is no option to decide wired or wireless and nothing in the UI for their web portals.

All in all, it has not been a good experience. I hold a current CCNA+S, so I understand networking. I worked as a WAN Engineer for 8 years. If I am having this much difficulty, I can't imagine what others are doing. I really wished there was a CLI for these devices. Then I would be able to (for example) turn off the 5GHz SSID broadcast I won't need on Wireless 3, and validate that client isolation is really turned off and not just saying it is... which is what I suspect my issue has been this whole time, and will be fixed by a factory reset 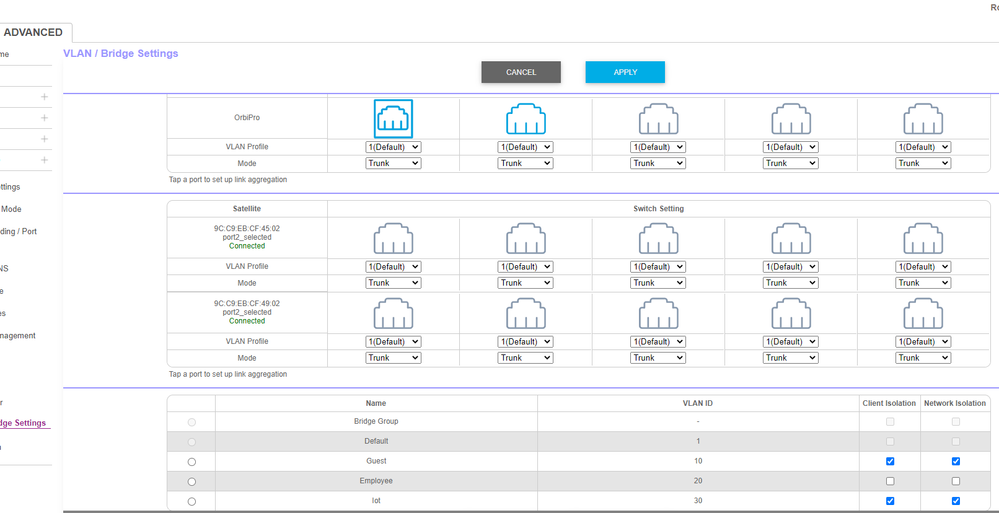 Your assumption that I don't know basic networking is a bit pompus. I challenge you to do a ctrl+F in the actual user documentation, as it fails to mention NUMEROUS features shown in the interface.

Try doing a search for:

If they are shown, they are show with no explanation at all, merely shown as an option. That's crap. If you are going to make up a term like network isolation instead of Enable/ Disable inter-VLAN communication, you should explain it. Buy hey, I'm not the guru, so don't shoot the messenger.

It's not me, it's neither my design, nor my definition. Hey, I'm fully with you! I have done the CTRL-F while replying the first time already....

Much more I suspect that there is something borked with what Netgear does designate as "network isolation" - if disabled the routing should (in my opinion) be up. Sorry for not making this clear as part of my reply.

Up font, I wish I had an SXx80 to play with the wired backhaul - but none available. So I'm still in the process of trying to understand the Orbi Pro WiFi 6 system when t comes to it's wired backhaul.

Consumer Orbi and the similar design Orbi Pro wired backhaul was intended to run on direct network cable connections, nothing else. The different networks (normla and guest) were split in some L2 tech on the individual devices.

Here on Orbi Pro WiFi 6, I'm almost convinced that the wired backhaul must be run using VLANs. Of course, as long as these are on dedicated cables, all fine. But when we have switches in the wired backhaul play, I'm conviced that the ports intended to make up the backhaul - on the Orbi device as well as on the switches the VLAN configs must exist, and must be configured as tagged VLAN on the trunks (except the VLAN 1 which plays untagged, so PVID 1). The absence of this in your setup is what I guess does lead to the problem that both broadcast domains are interconnected, and you randomly get IP addresses from what supposed to be two different networks/LANs/broadcast domains.

My expectation is that an existing wireless backhaul with switches must be VLAN configured similar to a plain normal business network with many wireles access points with multiple SSIDs connecting into different networks. And this information is - I think - is completely absent.

The idea - and that's just my idea now - is that a plain flat switch default config does not work here with the Orbi Pro WiFi 6.

Will take some more time reading the SXx80 doc later on - on the first iteration I have not spotted any information for the wired backhaul switch and port configuration required.

@captclam1  Is your issue resoloved ? Are you ok to export debug files via PM so our engineering team can try to reproduce?

Bump, was curious to know if you got inter-vlan routing accomplished?  It doesn't explicitly state it, but it seems like the Orbi Pro 6 is able to act like a Layer 3 switch, so it seems like it should be possible.

...curious to know if you got inter-vlan routing accomplished?  It doesn't explicitly state it, but it seems like the Orbi Pro 6 is able to act like a Layer 3 switch, so it seems like it should be possible.

In my understanding, the controls are limited to the "network isolation", so it's less than wht is vailable on a simple L3 smart switch. The KB How do I create, configure, and assign VLANs on my Orbi Pro WiFi 6?  says. "When network isolation is enabled, clients in this VLAN cannot communicate with clients in other VLANs."

What is in the works is an Multicast routing feature while talking.