Victoria from www.sfgirlbybay.com partnered with NETGEAR to review the Orbi WiFi System.

"i’ve been doing a bit of redesigning lately and noticing that even the smallest improvement can have a big impact, like adding Netgear’s sleek and simply designed Orbi WiFi system to my home for reliable coverage without sacrificing my aesthetic."

Read Victoria's Sfgirlbybay Orbi Review, be sure to visit @Sfgirlbybayblog on Facebook for more from the blog.

Dear readers, do you have any photos of your Orbi setup or Orbi success story? We'd love to see them and feature them on NETGEAR Community. Post your photos in a new thread, and send a message to @BretD. 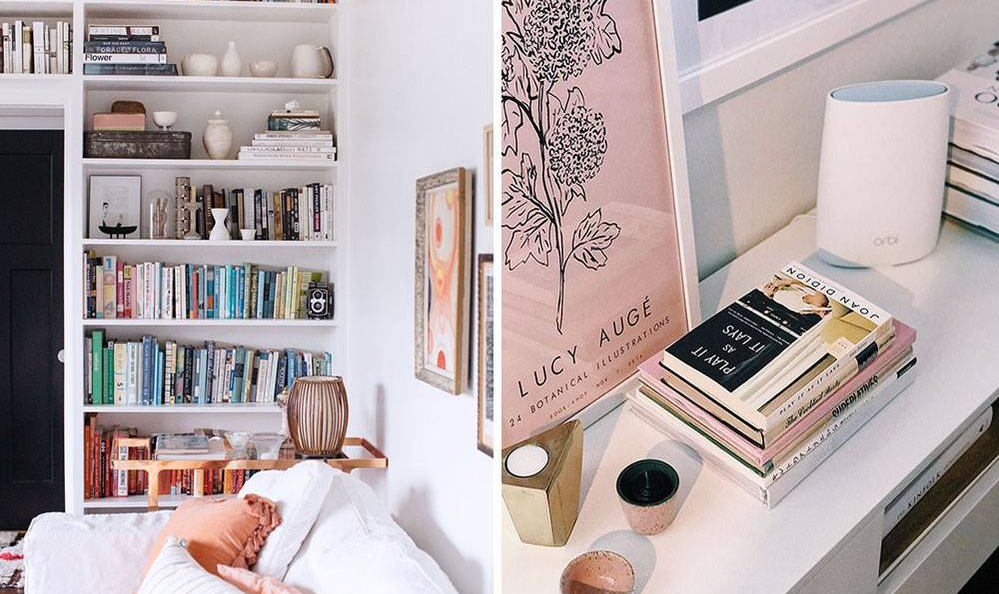 KUDOS or REPLY If you found this helpful.
Message 1 of 13
Labels:
Me too
2 Kudos
Reply

Would be happy to send photos as soon as Netgear solves the never-ending firmware issue. Just take a read through this forum and you'll see that while the Orbi has potential, just about nobody is having a stable experience. In my case, an Orbi Router, three Satellites (one hard wired) and one wall unit. All have latest firmware, all devices show properly in device listing but the system is never stable for more than a few hours and then it either loses satellite connections, reboots itself or requires complete reboot to regain access. My wife and I both work from home so reliable internet is a necessity. Orbi is clearly failing its customer base. How about now new features, no new products, no more advertisements until you have a quality product and salvage the sizable investment so many people on this forum have made.

What firmware was she running?

Is this a parody post?  My orbi was great until the faulty firmware releases of the last month or so.  Now at least once per day all my devices drop at random times with my android phone dropping most frequently.

It is a little expensive to be a classy piece of furniture but that is about all it is useful for at this point.  I'm on 2.1.2.18, just in the time it took to write this post I had to disconnect and reconnect my wifi.  Really disappointing that Netgear decided to crowdsource the QA dept on this one.

Speaking as a relatively untroubled Orbi user whose system has been more or less stable I can say that I think the Orbi looks pretty nice and is unobtrusive in the house.  TBH - the units just sit there unnoticed for most of the time as they blend in fairly well.    I think the Orbi logo on the front could be smaller or less obvious though.

Where I do think Netgear dropped the ball was on the horrible power supply which juts out from the socket making it difficult to hide.  I ended up buying a mains extension lead, plugging that into the socket then hiding the supply behind a cabinet.   Surely with the size of the RBR50, it would have been possible to put the PSU inside the main casing?

Most people will not be having issues and so won't be on these forums.  I've had mine (RBK50) for 10 months without a single issue: no dropouts, no reboots etc.  I know that's of no comfort to those suffering issues but to state that 'just about nobody is having a stable experience' simply isn't true.  My only issue at this time is the lack of a truly isolated Guest Network though I'm sure that this will be resolved in time.

Doesn't even make a good doorstop.  Looks great.  Doesn't work.  Support technician advised to exchange router for a new one.  After the exchange, it still doesn't work.  Returning for refund.

OK, fine. I'm sure its possible some population of buyers have not had issues, but I've had nothing but issues and many, many people on this forum have too. After months of trying every Orbi firmware/configuration available, I gave up for good. Unplugged the router, three satellites and a wall satellite and threw them in a box for recycling (should have returned at the first sign of trouble). They are too big, too ugly and too error prone to use as door stop, paper weight or to give to a friend or relative. I purchased four Linksys Velop units over the weekend. They have dedicated backhaul and ethernet capability like Orbi, a much better App and extremely simple configuration. So far since Saturday morning, not a single reboot and not a single dropped signal on any device. Bandwidth speeds are equal or superior to Orbi in all locations, including outdoors. The units are deployed in the exact same house in the exact same location and topology as the Orbi (except no wall satellite needed) and I have not had a single issue since installation. This experience and a very sizable investment tells me that there is indeed something seriously wrong with Orbi (hardware, app or firmware). Congrats to the happy Orbi users out there and my condolences to those that are still fighting the battle with a very poor product.

For the many of us that look at this review and scoff, I think it's important we reply to SFGirl's post. She's likely an unwitting particpant in Netgear's campaign of misrepresenting the Obri to potential customers.

Please, put a reply up.

I am at V2.1.2.18 running on my router and both satellites.  I am not a Netgear employee and receive no special benefits of any kind.

My experience with the Orbis has been positive.  I have had fewer than 5 issues with the Orbi in the year I have had them.  With one exception they were all cured by reboots.  The other required a reset which was a pain.

The performance is wonderful in my 3 story 2400sqft townhome and fixed the wireless performance issues I had with an ASUS RTAC68U.  I have experienced stabilty issues, but believe these are more a factor of poor past service from TWC (now Spectrum) as I had service and stability problems prior to getting the Orbis.

FWIW, I own an Arriss Surfboard modem and TWC seemed to be constantly taking it down when they serviced their network.  I pay for 300Mbs service and was often downgraded to less than 100 and not infrequently to 6Mbs.  I can't tell you the amount of time I spent with their non-support staff.  For a long time I proactively rebooted everything every couple of days to get my network speed back.  Fortunately, Spectrum just applied a patch to their routers and backends a couple of weeks ago and since then my service has been steady at 340Mbs (wired to the router) and 305Mbs wireless (10 ft downstairs from a satellite).  I have not had to reboot my Orbis since then.

Thanks for all of your comments on our SFGirl's Orbi story. The Orbi team is aware of a few issues that popped up for some users in a recent Orbi Firmware release. Your best bet is to visit this thread in the NETGEAR Community for updates to the issues you mentioned. It has a few things you can try in the meantime and we will continue to update the post when it is completely resolved.

KUDOS or REPLY If you found this helpful.
Message 12 of 13
0 Kudos
Reply

Thanks for all of your comments on our SFGirl's Orbi story. The Orbi team is aware of a few issues that popped up for some users in a recent Orbi Firmware release. Your best bet is to visit this thread in the NETGEAR Community for updates to the issues you mentioned. It has a few things you can try in the meantime and we will continue to update the post when it is completely resolved.

I'm happy to see netgear starting to publicly acknowledge the issues plaguing users. However, you've gone from "dishonest by omission of the issue" to "dishonest by positioning the issue inaccurately".

The backhaul issues (or "disconnect issues") are not a recent problem caused by a lone bad update. I've been able to reproduce backhaul issues using a test case I've shared with Netgear over 7 months ago. I know at least the following firmware versions have backhaul drops that can be reproduced in either minutes to hours, depending on the versions.

Now, that's just when I started tracking firmware to test the issue! It was certainly happening before that, but I don't have the firmware version numbers.

Users didn't have intermitted connectivity issues, and within a few days, head onto the forums to plead for help. They had problems for months first. This isn't a "small recent update" problem, this a long known core problem that has not been fixed.