The EX8000 runs fine after reboot, but eventually it starts to have stability issues. These issues manifest mostly on the 5GHz extended network and take the form of:

When the EX8000 is in this state, the 2.4GHz connection seems to work ok, but the issues with the Admin/status page are the same. The only resolution is to reboot the extender and then start the countdown again until the next stability problem. This occurs anywhere from 2 to 5 times a week, meaning 2-5 times a week I start to see weird behavior with internet connection, figure out its the extender again and have to reboot it.

It's a bad enough problem that I've permanently set some devices, such as PS4, to run on the extended 2.4GHz network to avoid the headaches of connection dropping in the middle of a movie or game.

The 2.4GHz and 5GHz networks on the Asus router have zero problems. I have other devices connected to them with no stability or performance issues. I also tested an older Asus router with the EX8000 and had the same stability problems on the EX8000.

Netgear's wonderful support policy re out of warranty products makes it so that my only good option is to post here. I could buy a support contract or simply throw this thing in the trash and put that money towards an Asus mesh device and be done with it.

Does anyone have similar issues? Any thoughts? I'm certain the problem is on the EX8000 but I can't report it to Netgear without spending more money, likely to no good purpose.

Your screen shot told us nothing as all the important parts where missing. not sure if you did that or if it appears like that.

One thing I recommend with the EX8000 and a solid router is to disable the 2.4ghz "extending"

You can still use the 2.4ghz but it ensures that it uses just the dedicated 3rd band for the backhaul.

Reason I recommend this is the 2.4ghz is sensitive to interference/drops. And when it has to go router----extender and then extender----devices, the chances of drops increases.

Plus it lets you use a different channel from your primary router to help prevent interference as well.

So I'd try factory resetting the ex8000 and during the install process (using the installation assistant), uncheck the "extender 2.4ghz" network. again it'll still work but will only use the dedicated backhaul.

and then just ensure your 2.4ghz networks from the router and the extender are on seperate channels so they aren't interfering with each other.

Thanks for the reply, @plemax . The previous screenshot is how the EX8000 appears when it gets into this unstable state.

I did coincidentally do a factory reset today after my initial post in an attempt to eliminate some bogus configuration as the source of my issues. I've attached a new screenshot of the EX8000 after factory reset, before it gets into it's weird state. 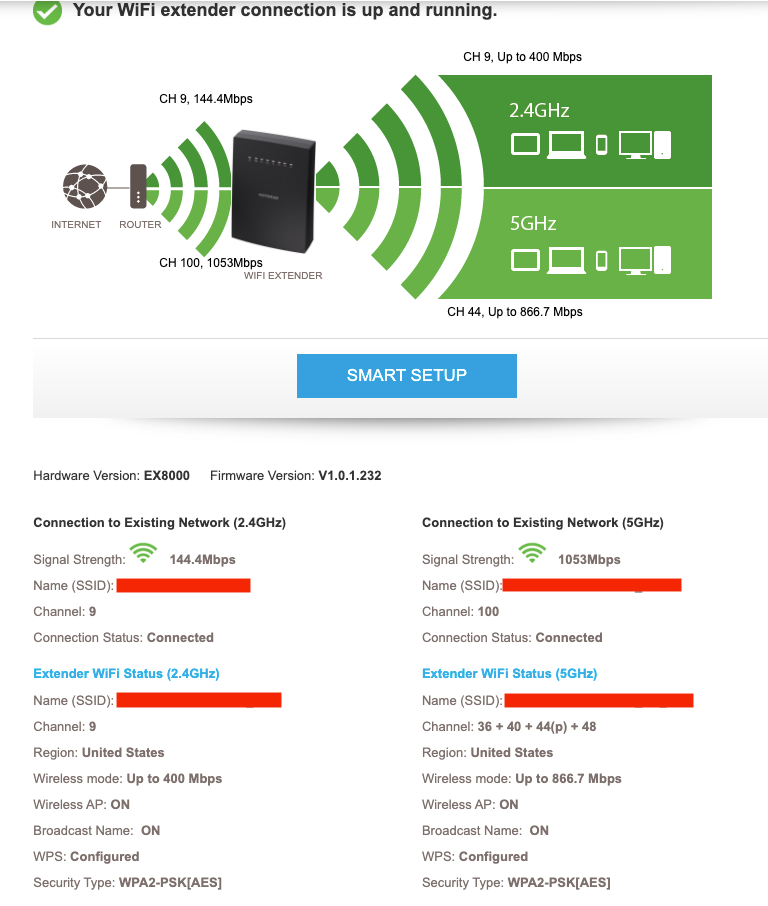 I'm not sure I understand your suggestion about disabling the 2.4GHz extended network and it's connection to the backhaul. I take it you want to force traffic only through 5GHz extended --> 5GHz router. Is that correct? I can think of two scenarios this helps validate -

Are these what you are thinking might be going on? I've had a look at the LEDs on the front when it's in this weird state. From the manual, it says the "throughput" LED would turn off if it were using 2.4GHz for the backhaul but I haven't obseved that.

I'll give it a shot (disable 2.4GHz entirely) and will see what happens. If this fixes the problem then theres some serious bug in the firmware that has it falling back to a slower band without giving any indication of it anywhere.

EDIT - no idea why my images aren't working, annoying. Attached one directly.

It could also be because you're using channel 100 for the backhaul. If you're in an area with active radar, the router might be going from dfs channels to non-dfs channels and back. That can cause drops/stability issues. Its also possible during those periods that its falling back to the 2.4ghz.

Another thought is your 2.4ghz is only connecting at less than half the potential link speed. It makes me curious how far away the extender is from the router and whats between the 2?  2.4ghz tends to broadcast further and through more materials than 5ghz but it seems like your 5ghz is fairly solid.

The majority of neighboring networks here are 2.4Ghz, so I'm assuming that interference is the main reason for the slower link speed. Even sitting in the same room as the router, I wasn't getting faster than 300Mbps link on the 2.4Ghz band and usually slower than that. I hadn't worried much about it since the 5Ghz works fine.

The distance between router and extender is around 20 to 25 feet. I'm living in a Victorian house with brick walls and heavy plaster. I've attached a simple diagram so you can see how things are positioned. The scale is only an approximation, but this is roughly how it's all laid out.

I tried a bunch of different channels + setting on the router yesterday, both on the 2.4Ghz and the two 5Ghz bands but I couldn't get faster link speeds than what was already there. In the end I set everthing on the router to automatic, which I never usually do but in this case it's working fairly well.

I only bought this extender last year, but I had an older Asus router at the time. Now that I have this one which supports Wifi 6 I might replace this extender with an AiMesh satelite that handles Wifi 6 on the backhaul and just walk away. I'm hoping some configuration setting will fix this, but I've never had a piece of wireless hardware that required as much tinkering as the EX8000.

brick and plaster are close to 2 of the worst materials for blocking wifi.

Usually when I find people with those types of homes, I advise them to find a way to hard wire in access points/extenders.

The plaster/brick makes the wireless connection unstable and unreliable. Some can get it working but most struggle.

To hardwire it you can investigate moca adapters (ethernet over coax), powerline, or even running a few runs of ethernet (if you own the home). Sometimes the cost is offset with much better stability. Plus if its hardwired, the cheaper mesh systems (dual band mesh) can be hardwired in and function as well or better than the triband mesh systems.

But if you've got it working, great. If it stuggles with stability, I'd look into hardwired connections for your access points.

Yeah, these houses are tough for wifi. What's crazy is that my neighbors upstairs network comes through really well because there are only wooden floors and beams + a bit of ceiling plaster between us. But down the hall in my own apartment its a struggle.

Unfortunately I don't own this place, but I may try some ethernet cable run along the edges of the room and then at least get a wired backbone to the extender.

All of this (while helpful) doesn't explain the wonky state that the extender gets in though. I'm convinced that beyond whatever signal struggles there may be, the extender also gets to some point where it is not behaving. Signal interruptions are likely to be sporadic. When the extender gets to it's "unstable" state, even it's own UI barely works.

Are you aware of any way to turn on logging or other diagnotic functions in the firmware? The controls are so basic that I can't get anything beyond a status from the admin UI.

there's not. But you can try other firmwares. I've used the .202 for quite a while and it was pretty stable for me.

My router is the ASUS GT-AC5300, which is working great on stock firmware. Meanwhile,with 2 spare repeaters, i decided to deploy my ex8000 on the latest firmware, to the 2nd last room in the house. setup was normal though, however within minutes the unit was quite unstable. I then disabled the 2.4ghz and use only the both 5ghz.

1. 2.4ghz was disconnecting dropping earlier and then while using both 5ghz, the connection was pretty unstable,

2. The unit was blinking red though the distance was not that far from the router

3. the issues remained despite i setup twice again, even via WPS

Such issues was not even present while i was using the Netgear Orbi RBR50, the EX8000 Sync VERY well with the router, very stable. Well, gotta bite the bullet since RBR50 was sold off.

Now using the ASUS RP-AC68U Repeater......works beautifully with mine ASUS GT-AC5300, my own conclusion - simply compatibility issue. Seem the EX8000 may not work with any other router per se. However, i would still be keeping the EX8000 for future usage if i were to switch back to Netgear again.....well i would.

I include my email for personal further chat on netgear issues - kungfu1974@gmail.com