I received an email that a firmware update was available for my router - WNDR3700v5. The firmware update option in the router interface showed no update available. I went to the Netgear website and found the latest update, which has the same version number as the one I have installed. I downloaded it in case it really is an update without a version number change. However, I have no need top install it unless it provides SMB2 support.  I am running Windows 10  with the latest updates . An update some time ago  set  the SMB2 requirement so that I can no longer use my network drive with the Netgear router.   Has SMB2 support been added for this router? (I am aware of previous forum entries on SMB2 support which were never answered properly. I am reluctant to force my PC to use SMB1 by editing the registry.)

Adding just SMB2 protocol would not make the WNDR3700v5 (nor any other router) Windows 10 "compatible" - there would be more required, like adding WS-Discovery. Even the leading edge Nighthawk routers don't come with a WS-Discovery capability yet.

There is no need to hack any registry entries. In WIndows 10, just type "Windows features" in the , in the search field. In the "Turn Windows Features on and off" enable the SMB 1.0/CIFS File Sharing Support - both SMB 1.0/CIFS Client and SMB 1.0/CIFS Server features are required, because of the Server component does include the NetBIOS discovery and name resolution. All fully supported. Security issues have been fixed a long time ago. 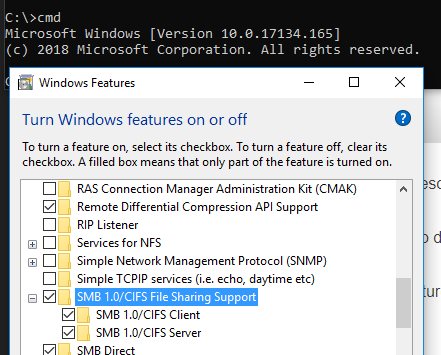 OK, so I can enable SMB1 support without editing the registry.

SMB2 was added to overcome some security issues with SMB1, and many of us are reluctant to continue with SMB1.

Why does Netgear not update their routers firmware to meet current security standards?


SMB2 was added to overcome some security issues with SMB1, and many of us are reluctant to continue with SMB1.

SMB2 has not added any additional security,it was simply not vulnerable to a certain attack.

SMB2 and SMB3 have some enhanced capabilities for accessing on networks with higher latency (WAN, VPN, Internet, ...) and would allow supporting Jumbo Frames (something Netgear is ignorant when it comes to consumer devices) resp. large MTU.

SMB3 would have some optional (by negotiation, policy controllable) additional security features like the encryption. However, SMB3 encryption does compared to Windows perform very poorly on the SAMBA Open Source implementations.

Worth noting again: Adding SMB2 and even SMB3 does not change the requirement to have the NetBIOS device discovery and name resolution - a feature available with the optional SMB1.0/CIFS Server feature - as Microsoft has decided to remove it from the default installations in favour of WS-Discovery.


Why does Netgear not update their routers firmware to meet current security standards?

Leaving the security standards aside - have you checked your router dnsmasq version (??) - I don't know, I'm not Netgear. Just guess because of some resource constraints (Flash size, limited memory), product lifetime considerations, no latent security vulnerabilities, and last but not least lack of pressure from the customer side.

Worth noting, I had set-up (a lot) of pressure to get a newer SAMBA implementation and controls to start with the leading edge R9000/R8900 (Nighthawk X10). Netgear was very quick in introducing the update (very uncommon!). Same update was added to a few other router models as from user reports. But again, even more than one year later we still haven't got WS-Discovery. Note the R9000 platform is expensive, it comes with lots of memory and Flash, and a capable CPU.

Thanks for this information, although I'm not sure what to make of it.

You say that Windows has addressed the issues with SMB1, but the option still seems to be disabled by default in new versions of Windows 10.

It's part of a Microsoft migration and Windows lifecycle management processes. For communications between Microsoft Windows systems these features are no longer required, so there is no need to have these installed on each Windows system - very similar to dozens of other features which can be enabled if required, or disabled if not required. That's it.

We all NEED SMB2 and SMB3 and WS-Discovery support for readyshare !!!!

Better Business Bureau: That is the way to go to
https://www.bbb.org/consumer-complaints/file-a-complaint/get-started
I'm waiting almost a year now for a firmware update that handles this !!!

The R8000 already supports SMBv2 and SMBv3 since firmware version 1.0.4.2 as described on the link below.


The R8000 already supports SMBv2 and SMBv3 since firmware version 1.0.4.2 as described on the link below.

The average Netgear customer does not understand why one has to install SMB 1.0/CIFS feature set on Windows 10 to have the ReadyShare on the LAN fully workable (with router ReadyShare configured name discovery and name resolution) regardless of the SMB2.x and SMB 3.x transport protocol support.

There were some discussions with Netgear L2 support leaked recently (with some very senior community members), and it's clear that they don't want to understand that a WS-Discovery implementation must be added to all these routers to get the normal functionality - without installing the SMB 1.0/CIFS feature set on Windows 10, which does include NetBIOS name resolution and discovery. Can't see what is soooo damned difficult implement some industry standard compliant code on these routers. £