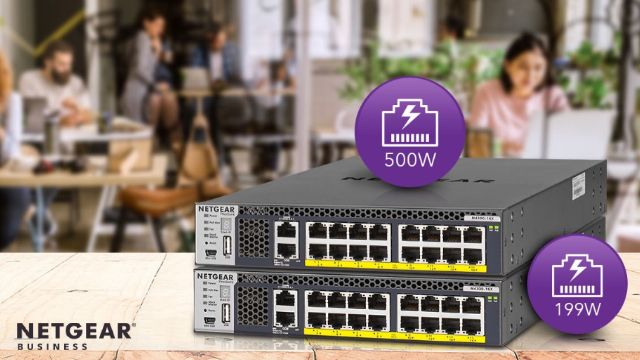 The NETGEAR M4300 is a line of 13x 1gb and 10gb  fully managed L3 switches. Small to large IT teams worldwide pick M4300 because they are ideally positioned in education, government, hospitality, large business, and even specialized industries such as ProAV. With a vast collection of port-counts and speeds, redundancy, flexibility, stacking capabilities, non-stop forwarding, and more M4300 strikes a perfect balance of features, and value -  and that’s the special sauce making M4300 great choice when it comes to L3 managed switches.

In a recent Business Blog NETGEAR M4300 Layer 3 Switches were discussed with their multitude of features, and professional IT use cases. Why do we have so many sizes and formats of M4300? Simple - no matter if it’s top of the rack, or the edge of your network, you need options.  And, If a switch isn’t available with the port-count, port-type, and features you need - you’ll be forced to build a network of compromises. With that in mind, we would like to build upon the blog go and more in-depth on the model M4300-16X switch to help you understand what makes it special, and useful in many situations.

As a relative newcomer to the M4300 family, this versatile switch model was created to solve several IT deployment challenges in ProAV, Power over Ethernet, and edge connectivity. Our team received feedback that some deployment scenarios had low utilization of fiber ports on some M4300 models such as the 12X12F. They asked us to increase the density of 10G copper connectivity, and also add optional 10Gb PoE+, and the 16X switch delivered! The 16X packs a large number of copper PoE+ ports into a small package, with full Layer 3 capability. Additionally, power over Ethernet PoE+ is supported on all ports with a total power budget of 199w to 500w depending on the swappable power supply chosen - more on the PoE capabilities later. It features sixteen (16) ports of 10gb copper (specifically, multi-gigabit ports with Fast/1Gb,2.5gb,5gb, 10gb) with a total of 320gbps non-blocking fabric, and full layer 3 switching capabilities. Switch stacking and all other M4300 family features are also fully supported. With its focus on RJ45 Ports and optional PoE, the 16X can be acquired for approx 20% less than M4300-12X12F (10gb hybrid fiber & copper) and 30% less than a similarly equipped M4300-24X (no PoE) 10gb copper switch.

It is understood that not all M4300 deployments need PoE+. Considering this, the M4300-16X is a very flexible platform when it comes to costs and PoE+ capabilities. The 16X’s swappable power supply has two options: 299W and 600W. And, thanks to the 299W “PA” lower-cost base-level power supply, if none or only a small amount of PoE is needed, the minimal PoE functionality is simply included in the cost of the switch. But, if your deployment needs full PoE+ all 16-ports, simply order the “PB” version or later upgrade your 16X with the “PB” Power supply, and it will be ready to confidently supply a total of 500 Watts to all connected PDs.

Deploying or migrate servers to a 10G backbone with M4300-16X. Without a doubt, the capabilities of basic PC, attached storage, security cameras, and more are growing at an exponential rate. In many cases, 1Gig switches (or even 10G uplinks) cannot provide the quality of services needed for these applications. Many small and medium-sized servers are upgrading to 10G copper cabling to ensure the free flow of data. With a full 320gbps fabric, M4300-16X easily fills this role and keeps data flowing.

M4300-16X can power 10G Core/Aggregation in Spine and Leaf topologies. Modern network architectures must support modern connectivity and modes of operations such as spine and leaf topologies, non-blocking backplanes, Non-Stop Forwarding, and switch stacking. Line-rate spine and leaf stacking topologies offer multiple possibilities in server rooms, in branch collapsed cores or at the edge of growing networks. Read the What is Spine and Leaf Networking blog for more discussion of M4300 in the Spine and Leaf role.

M4300-16X Connecting Copper Mult-Gigabit Ethernet devices. New ethernet devices are being deployed that go beyond the limitations of 1Gb. Often rather than rip and replace infrastructure, these devices can communicate beyond 1Gb using existing Cat 5e and Cat 6 cabling. Learn more about Multi-Gig switching. The Multi-Gig capable M4300-16X is ideally posited to not only Power (with PoE), but also but supply next-gen WiFi 6 APs and other devices with 2.5Gb or faster connectivity.

M4300-16X for AV over IP Switching and powering PoE+ RX/TX end-points. Thanks to Advances in video CODECs and compression/transmission of ultra-low latency 4K+ video is quickly moving to the data-center. NETGEAR Business and M4300 switches have played a key part in this as a founding member of the SDVoE Alliance. Take heed ProAV integrators;  M4300-16X is designed for you! More and more RX/TX are requiring 10Gb connectivity, (or multi-gig in some cases), and the lowered complexity and flexibility of PoE+ powered end-points cannot be discounted. We will discuss M4300 in ProAV in a future article, but in the meantime, we invite you to visit the NETGEAR ProAV page for more information on this exciting use case.

NETGEAR Business stands by the M4300 switches product line and provides a robust lifetime warranty. In addition 90 days of Technical Support via phone and email and lifetime chat support. And if and if there is it is ever needed lifetime next business day hardware replacement. Visit the NETGEAR ProSafe Lifetime Warranty page for additional details.

Is the M4300-16X the right switch for your next deployment? Find the right NETGEAR M4300 Switch models for your next IT project. And discuss this article in the NETGEAR Managed Switches forum. KUDOS or REPLY If you found this helpful.
Message 1 of 1
Me too
1 Kudo
Reply
Top Contributors
See All
Announcements