Environment where Relevant:  Most noticeable when playing games or voice chatting, but it is always happening.

The wifi works perfectly.  The ethernet ports do not.

I am getting horrible jitters when I play games.  I am NOT using wifi, I am plugged in to the main router.  My ping is insanely unstable.  When I ping my local IP in command prompt, I can see my ping spiking from <1 to over 80.  On rare occasions it goes over 200.  The router can't go 10 seconds without spiking over 2ms.  Plugging directly into the modem fixes this. (CM1200 Nighthawk modem).  I am using CAT 5e cables.

When me and my girlfriend both play together, its even worse.  We are both plugged in via ethernet, spiking to over 800 ping in Valorant.  We could both play perfectly fine on the old router and modem.

I'll provide screenshots below of my ping spiking in command prompt.

what modem/gateway are you connected to?

Does it happen if you hardwire the gaming console into the modem?

If I plug my laptop directly into the modem, it does not happen.  I am using a CM1200 Nighthawk Modem, using the first ethernet port.  My router is the only thing plugged in.  I am not using a console, just play on my laptop.

One of the worst tests I've run.  I've never seen an average of above <1ms on this test.

I don't understand how my ping could be 155 when I am plugged in. 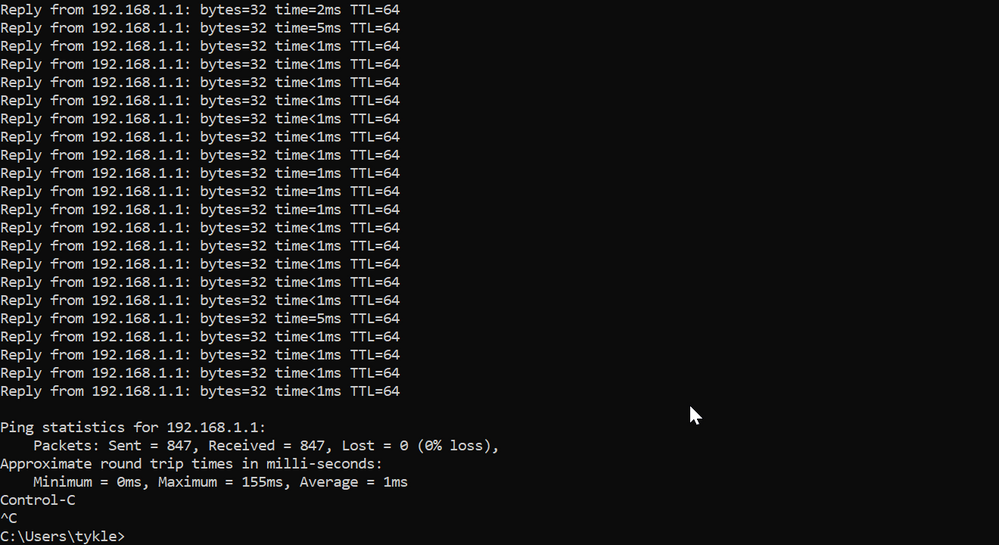 Bump.  Still need help.  When my friend runs the same test on his setup, its his average ms is 0.  I still can't believe a router this expensive could be this bad

I assume "ethernet" means plugging in to a satellite.  That means it's using wifi as the backhaul to the base router.  Still probably better than wifi to the satellite, then wifi to the router... but it's not a true ethernet connection.  I don't remember if these have a LAN port on the router, but you could try plugging in there to verify the router itself isn't causing the issue.

My guess is interference from other stuff.  Either bad channel selection (someone else is using the same or an overlapping channel), and picking a clearer channel will help.

Or interference from other devices like microwaves.  They blast out noise when they run that can mess with a lot of networking devices.  I think bluetooth can overlap with some wifi signals too.

Don't know if you have Quality of Service on for the router.  I have it off so I can use my full bandwidth when I want, but that leaves some unused so devices can have time to get info through quickly.  Large bandwidth users like streaming video or bittorrent can impact pings for others.

And sadly cost isn't always equivalent to quality.  I'd thought my mk63 had a dedicated backhaul channel, but didn't spend the time to verify.  If I had it to do all over again I'd probably buy an Asus router for their "AI" feature that can make a mesh out of many of their line.  You can get 3rd party firmware too, so if they stop updating stuff you might still get bug fixes (though you run the risk of new security holes).  I don't see the benefit to Netgear over TP-link for instance.  I can't trust Netgear to create quality products based on their name alone.  I have to nitpick their stats just like everyone else.