I have a R7000 Wi-fi Router and expirience some Internet slowdowns, interruptions in the connection and so on. I searched up and down for a usable firmware including beta firmware, with no success, Netgear claims that "soon" they "engineers" will come up with a solution so please please netgear don't "brick" the r7000 an give us a stable an runnig firmware!

More info please. Was it always like this? What version of the firmware are you running? Wired, wireless only, or a combination?

Actually no, the Firmware wich was on in out of the box was the best performance, since then it got worse by every version i update to, 1.0.6, 1.0.5, 1.04 it's a nightmare, a real mess. The Consoles and the PC are connected by LAN Cat 6 Cable, the Smartphone an Tablet by Wifi 2.4Ghz the overall performance is really bad now, about 30%-40% speed loss connections break up fail to reconnect, slow internet, the router resets itself, wifi goes off.

Putting on V1.0.5 and .6 could be the problem. Try going back to the last official one, V1.0.4, but since you put on more recent beta's that have been removed by NG you'll need to RESET the router after installing the firmware AND manually re-enter all settings. Hopefully that will get you back working.

There is a NEW supposedly stable beta, V1.0.5.62 (which I'm running) that might work as well. That beta DOES NOT have Arlo support which it seems had caused some problems.

Here is the link for the latest betafirmware.

@JamesGL, why isn't this item listed as a sticky on this forum? Seems many people don't know it exists?

Just my two-cents, but I think only official public released software should be stickied. Beta's should not have the same privilge. Forum moderators should sticky 1.0.4.30, released 06/10/2015, for general consumption. The reality that this release is almost a year old is another sad subject entirely.

The top part of the forum list is basically not specific in what can/should be there. No rythm or reason for the 'order'. Under All Discusssion in Blue are the 'stickies', one Beta and 2 F/W releases (none for the R7000). On the right is announcements, one notification and the official R7000 f/w release.

I really think there should be some order, but either in the sticky area or the announcement, the Beta  notice should appear.

Althought the official V1.0.4 is old, don't forget NG was moving forward with beta's and added in Arlo support. Wasn't working too well and someone must have taken stock of the situation and basically declared they would start over with an eye towards stabilization vs. added features. I consider that a step forward. The 2 V1.0.5 betas released I've used and mostly without problems. Those both were fairly recent.

However, it seems NG either has no 'rules' for what or how to post stuff for users in terms of notifications or those that can post such items here, such as the last beta, do it as a normal thread start and over time they get lost in the newer threads and can't be found. Hence the need for either a sticky or a specific place, like announcements, where they WILL stay on the top page for all to see, especially if new users to these forums.

Why there was no 'official' notice from NG is a mystery.

@IrvSp Sorry about the delay. That's now been posted as a sticky.

I see you posted a thread on it, but that will scroll off the first page in a matter of hours possibly.

Oh! It's floating up top under All Discussions together with the rest that are highlighted in blue.

@ElaineM it is only at the top because you just replied to this thread. As soon as someone replies to a different thread it will go above it.

Ideally it should be in the announcement replacing the last official f/w which is still there: 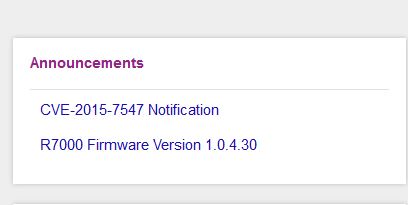 Either there is as a true sticky like the 3 in blue here:

Check back in an hour or so, the thread will be moved down, and eventually off the first page altogether. That is of course unless NG has changed how the forum s/w works and you have the capability to keep a thread at the top without it being a sticky?

I made a request on that but it should also be seen under all discussions.

Odd, I can't see that? You might have a different way to view it, internally I guess and it might not have been propogate outside?

That's really odd. The post has been viewed 99 times.

How about the announcement? That's already been updated.

YES!!! Both are there now. Suspect you are looking at an INTERNAL server and it had to propogate to the external server....

Anyway, thanks for doing this.

That did not help still have the issues, even with a Cat 6 Lan Cable i have disconnections, i reset on factory settings an updated the firmware. Any sugesstions? is my router alltrough broken and needs to be replaced?

@Gallipoli What's the firmware version installed on your router?

Did you reset after doing the upgrade? Is it a slow down on both wired and wireless connections?

What's the speed you're getting if you bypass the router?

What's the speed if the router is in place?

The newest Firmware is installed

about thats what im getting from UPC Cablecom 60mit/s

I tried to contact the German Support, they say i got no "Support" left, even if the product is within the warranty time. this is unacceptable! now they wanted me to call a overpriced support hotline wich would cost me about 2.- a minute, are you serious netgear? i am dissapointed, if this is not resolved netgear is no longer the brand wich i spend my money on!!

What is wrong here?! other have the same problems, can i get at last some kind of answer or even a solution to my netgear relatet problems?!

What IP are you Pinging? My pings to the router gateway IP are <1ms via 2.4, 5g & wired. What are yours? What FW version?