I am expecting a new FW or Hotfix any day now,  It was mentioned a few days ago that it was going through SQA (Quality Assurance)

I Still have my water cooling kit yes. The cooling performance is actually rather good only the quality of the unit is really bad. The problem is that if you confront them with it they simply lie and give false information which is not only annoying but also unprofessional.

I never encountered this with Netgear.. harware wise this is one of the best routers out there.. I don't know if you noticed, but many things have changed over the years and engineers/programmers are really really busy solving issues which MS or 3rd party softwares caused in the first place.

I know this as i am an respected member over of overclock.net and deal with these situations on a daily basis. So i can say confidentially that Netgear can and will solve this problem ASAP.

Simply sayig that you no longer recommend Netgear because of one buggy software is rather uncalled for and unnecessary imo.

Return the router if you don't want worries.

I've been making due with the 2.4ghz channel. I'm just wondering whats up with support for this product. If there is no support then I guess I will return it. I went with netgear since the last one I had performed so well (8 years solid service).

@bkds Problems started in November after a firmware update. Restoring old firmware is not solving the problem. Until now not a working solution. Do you call this support??? Don't worry.... return it. I am up and running with a new Linksys router. I wasn't able to wait. I hope they are able to solve the problem, I have my doubts. A lot of people just bought another brand.
Message 731 of 897
1 Kudo
Reply

I stopped using Linksys after Cisco bought them.  I know that's no the issue anymore, but have they got their act together?  Their support was awful under Cisco.  I also had an issue with Linksys (and DLink at the time) where it would blow away your configuration when you updated code.  I know it's recommended to factory-default your Netgear, but I only did that every few firwmare upgrades on my R7000 .. until this debacle.

My feeling is that the R7000 is a little too long in the tooth to purchase now.  I'm going to respond to someone else in a moment who was trying to give Netgear the benefit of the doubt, but this issue has been going on for months with no resolution in sight.  Netgear is trying to position themself as an enterprise player, but I certainly wouldn't tolerate this behavior from Aruba, Cisco/Meraki, Xirrus/Riverbed, Ubiqiti, Aerohive, Meru/Fortinet, Extreme or Ruckus (did I miss anyone?) .. and they are all established in the field.

I would also recommend returning the unit and going with another vendor.  I chose Asus and then flashed my R7000 (4 years old) with the xwrt-vortex code and placed it in a secondary role in AP-Only mode.  The Asus and R7000 both now have a similar console and both can be managed (give or take) with the same Asus app on my android.

I am also still following this thread, not because I intend to go back to stock Netgear code, but to help others out who Netgear continues cripple because the bad code is STILL available!

ASAP?  This has been going on for months.  Worse, the bad code is still available, being downloaded and installed by peopel who don't know about this issue until they are hit with it and search the forums.  That's not the mark of a reputabile company.

Yesterday I received an email from Netgear announcing pre-order availability for an enterprise class cloud-managed switch.  I manage hundreds of enterprise-class switches and hundreds of enterprise-class WAPs.  If I can't trust them to fix a flaw they introduced not just to my router (purchased ~4 years ago), but to people who are still purchasing the router.. how on earth would I trust them with my enterprise network?  No, I cannot recommend them and no I would not use them myself again (or for a very long time).  This issue has undermined my credibility among the dozens of people I've recommend the Nighthawk line to.

So, I have to respectfully disagree with your opinion.  Netgear has handled this poorly.  I'm disappointed that they haven't removed the bad code; that they are not being transparent in the process; that timely updates of progress are not being presented; that they continue to ask the same questions about how/when/under what circumstances the issue began; and that they have yet to present an apology!  Whether they have a handle on the issue or not (and I'm very much leaning toward the "or not" given the length of time that has passed), it is clear that despite the rhetoric, this is not a priority.  There are equal and better solutions out there... and they work.

I think we can reach 1000 replies before we have a new firmware published!

Bravo! You are exactly right. Netgear should have jumped on this issue with dedication and humility months ago, when it became apparent there was a serious, widespread issue. Instead, we still have no indication that they know what's going on or are willing to make their customers whole.

I moved to Eero and am quite happy. I highly recommend the company and products. A Reddit poster recently asked whether Eero offers any repair or replacement for units a few months out of warranty. The CEO of Eero replied and offered to replace the device for free.

That's outstanding service, and a rare and refreshing example of a company that deserves my business. Compare to Netgear, who wants to charge you for tech support after 90 days. I messaged Netgear 3 weeks ago, asking if they'll buy my problem R7000 back from me. Can anyone guess what came of that? You already know the answer, right?! You know, because if you've followed this thread, you know what to expect from Netgear.
Message 735 of 897
0 Kudos
Reply

Has NG fixed this BS? Why are there pages and pages of complaints but no solution. Can they fire the people responsible? Does the CEO not care? WTF?

I tried the latest hotfix at 9AM today and have already found a problem on my 5G media extenders, so same problem as before just happened faster than 12-24 hours.

Instead of a patch, why cant we jsut get a thorougly vetted revised firmware version?

Here’s the latest update on the R7000.  We have released a hot fix that you can obtain by going to our knowledgebase article title “R7000 Firmware Version 1.0.9.26” which contains a link to download the firmware.  This hot fix should help with the Wi-Fi disconnects.  We also still recommend you also update you Android and Chromecast built in devices with the latest updates from Google.  The feedback provided by community users who have helped test, as well as, the testing in our labs have been invaluable in creating this hot fix.  However, even though this hot fix should alleviate the disconnects, we still want to hear from users of any further issues after the installation of the hot fix.  As always, we very much appreciate  our users and the continued conversation in the community.  I see others have already posted the link to the KB but wanted to get this post out as well.

There seems to be a bug in this firmware release. Since I updated to V1.0.9.18_1.2.27, my Naim MuSo media player is no longer able to connect to internet radio stations. I dont have access controll enabled and I dont have any sites blocked. 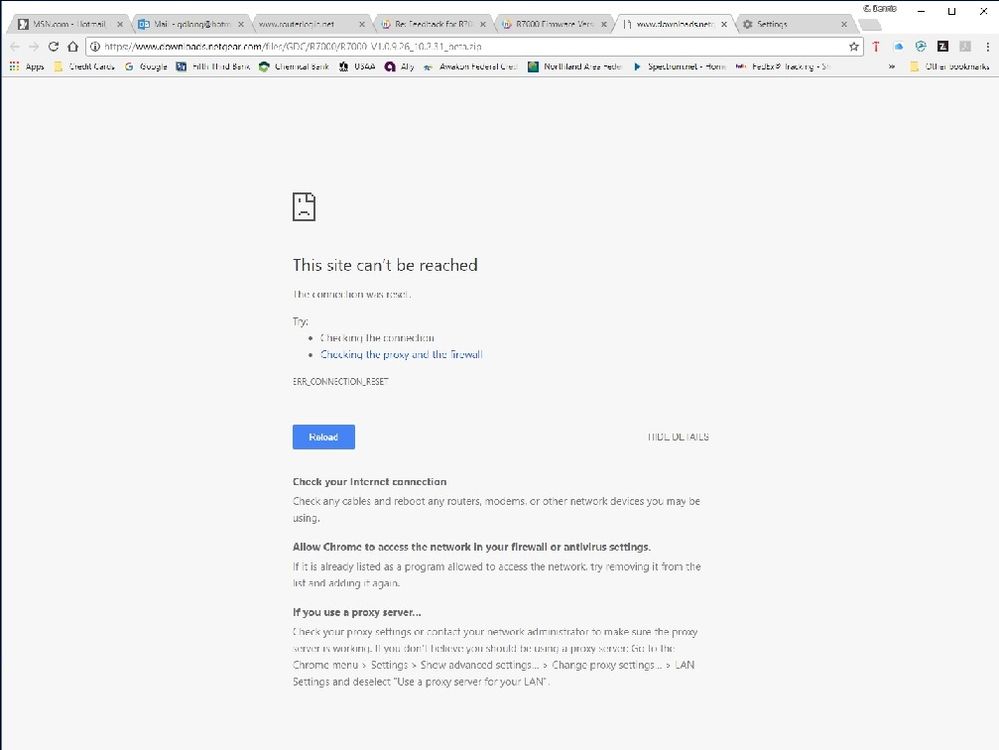 Please try again and it should work now. It works on my end.

I do not have R7000 but I think this hot fix will work.
Netgear router is suffering a common problem since last updates from late November and early December last year, due to limitation of the memory on board and inclusion of many new features at the same time that causes broadcast traffic jam, loosely speaking..
They are in process of fine tuning memory allocation or memory catche file size for some processes that run on the background to prevent overflow and resulting in the system instability.
All above is still in process...
Hopefully this mess is resolve soon.
In the meantime, I think the hot fix will work, since they remove the Arlo application in the system, for now.
BR