have sent this email 3 times now to the ntgrapps_support@netgear.com without a response.

Hello,
I am a frustrated Orbi owner. I have the router and sat package. Bought at Best Buy. When initially setting up I was walked thru updating the firmware. I then upgraded my internet speed to 200mbps from 100 as I was told it could handle the speed.

I have a few issues. I go on the app and search for updates and none show up for the Orbi router. So with that said not sure what happened. I had called and I was told to disable daisy chain and a few other things. It seemed to work but I have issues where when connected to the satellite my Wi-Fi on my iPad, tv iPhone disconnects or lags excessively. The kids are at sleep and I’m the only one up. I check the speed thru the app. And the speeds are what I subscribe to. Then I do the Speedtest.net and the speeds are totally off. I disconnect the router and plug into my laptop and the speeds are correct.

I then reboot the System and they both turn blue so they are connected. I try to watch tv and again the same thing. It is hooked up to a amazon fire tv which I update whenever they are released. I restart that and nothing changes. So I have become used to the nightly loading and pausing of the system....

Also, on the connected devices. I change the names and assign them what they are and then the names revert back to another type of device and name changes to some other device.

My warranty expired for phone or chat short and I’m about to disconnect everything and return it to Best Buy.

When it works it’s the best. But lately it is not.

Any reports from others of the same happening?

Ralph
Message 1 of 11
Labels:
Me too
0 Kudos
Reply

Which Orbi system do you have?

What FW version is currently loaded on it?

What MFr and model# ISP modem do you have that the Orbi is connected too?

I would try a factory reset and set up from scratch. Disable MIMO, Daisy Chain and Fast Roaming and IPv6 on the router.

Any other wifi neighbors near by? If so, how many?

Are you using a satellite? if so, what is the distance between the router and satellite? Should start at 30 feet minimum.

Which Orbi system do you have?

What FW version is currently loaded on it?

What MFr and model# ISP modem do you have that the Orbi is connected too?

Optimum - Arris brand, do not know the model number

I would try a factory reset and set up from scratch. Disable MIMO, Daisy Chain and Fast Roaming and IPv6 on the router.

When I had this issue, the company had me do settings changes and one of them was to disable daisy chain....not sure about the rest.

They also walked me thru the channel selection, not sure which one I'm on now.

Any other wifi neighbors near by? If so, how many?

There are neighbors on both sides of my home, about 50' each side.

Are you using a satellite? if so, what is the distance between the router and satellite? Should start at 30 feet minimum.

Please find the model# of the ISP modem when you can. Will help us determine if it's a modem only or has a built in router possibly.

Please try to disable MIMO, and Fast Roamnig as well after the reset and set up from scratch.

If you have wifi nieghbors near by, this could present a problem. Need to find out what channels there using and set yours to something different using 1, 6 or 11 channels. You might later on, change the power of the wifi radios down from 100% to 75%. If your using a satellite, you need to move the satellite a bit closer to the router since changing the power out put will reduce the range coming from the main router.

What is the distance between the router and satellite unit?

I do know it is a router only, I replaced the one they issued me with the Orbi.

The Arris modem is a router only? Arris has modems only and modem/router combo units. So if you can get the model# please. 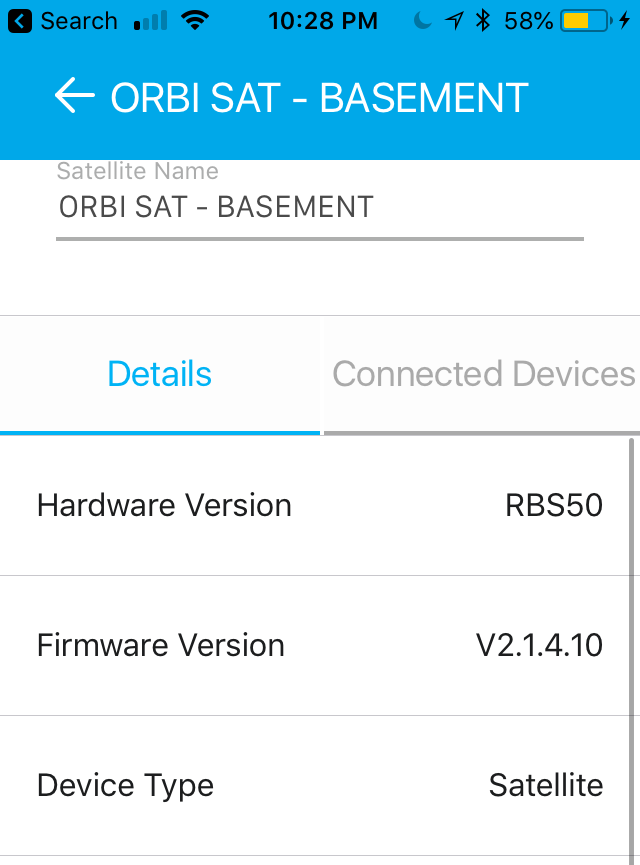 Sorry, I posted the wrong information. It is a Modem only. They had also provided me with a router, which I replaced with the Orbi system. The router is connected to the Arris modem.

Give the other suggestions a try.

Returned it to Best Buy

I returned mine to Best Buy and before I did I asked the geek squad behind the counter. Lucky for me, I was there right as the shift was changing so there were 5 people.

Since they install and answer lots of questions, they did mention the return rate is above average and the support from NETGEAR is abysmal.

So I went and asked them which one they see or hear the least issues and they said the eero. I got that system and I’m happy.

Too bad but I had to. No one from NETGEAR answered any of my email or even in this forum. So with that said, I no longer am a NETGEAR Orbi owner.
Model: RBK50| Orbi AC3000 High-Performance Tri-Band WiFi System
Message 10 of 11
0 Kudos
Reply

Re: Returned it to Best Buy