Yes, I'm not arguing that. But I would like to find the reason for the dirty bit to be set. If verified that all directories are read/write before I connect it to the NAS. Might be onto something with the long path and file names. Just started splitting up the backup, with one backup task for each share. Two smaller ones have succeeded sofar. I now scheduled the other shares, except the share where I suppect the long file names and paths reside. Will try to pin that down some more, if all the other shares have succeeded. Will take a while before everything is copied though, so more on that tommorow.


Would think so too, but can't achieve it in my setup. What would take 8 hours on a disk connected directly to the NAS, takes over 23 hours when copying over the network from the NAS to a USB disk on the PC. Can't really explain why this is so slow.
fotografeer.nl
ReadyNAS 516 / ReadyNAS 312
Message 9 of 25
0 Kudos
Reply

Have narrowed it down to my "Documents" share that is causing the problem. All the other shares backup without issues. Will try to narrow it down further in the coming period.

If I connect the disk to the PC and look for files and dirs with read-only attribute set, it finds nothing. Strange. The NAS just told me there is a read-only problem.

If I check for dirty bit, it tells me the disk is clean.


If I do a check disk on the drive, it tells me that no problems were found.

Can you send me your logs (see the Sending Logs) link in my sig?

Do you still have this issue if you connect the USB disk to the front USB port on the NAS?
Useful links: Sending Logs|My ReadyNAS Gear|FAQ|Hardware Compatibility List|Docs: Setup Guide, Manual|Downloads|Unofficial Tips|GPL|MDGM on Twitter|MDGM's Unofficial Guides
NB: A ReadyNas is not an excuse not to have a backup. Fire, theft, multiple disk failures, other hardware failure, floods, user negligence etc. can all result in loss of data.
How to contact NETGEAR Technical Support | Australia: 1300 361 254 / Other Numbers|Online Submission
Unofficial Guide for Moving from Sparc ReadyNAS to x86 ReadyNAS|Using Gmail with the ReadyNAS|XRAID Volume Size Calculator


Logs are in the mail.


Hadn't tried that sofar. I intend to backup > 4TB to a USB 3 disk, so connecting it to the rear USB 3 port seemed the most logical thing to do. I am now trying a backup on the front USB 2 connector with the share that is causing the problems . But it may take quite some time to back it up on USB 2, as the share is quite big.

I made sure that dirs and files on the disk have no read-only nor archive flag set:


And chkdsk found no errors:

By the way, the read-only checkbox in the Windows UI is a bit confusing, as explained here.
fotografeer.nl
ReadyNAS 516 / ReadyNAS 312
Message 12 of 25
0 Kudos
Reply

Same message for the backup on USB 2 front port as I get on the USB 3 port on the rear of the RN: "Error backup job 'Documents to USB drive': destination is read-only."
fotografeer.nl
ReadyNAS 516 / ReadyNAS 312
Message 13 of 25
0 Kudos
Reply

I ran into this same things when I first got my hardware. It's cool that you are really diving into what the cause of the issue is. I will be curious as to what you find. The fix was to let windows fix the drive and format it to clear everything off. Then make sure that you enable ejection of the USB device after the last backup is performed. Then windows and the ReadyNAS are happier when you physically remove and re-attach drives. I have a 3rd backup performed by connected a USB drive to a specific USB and press the backup button. Once it's done the drive is disconnected. I then have an Email Rule to flag and notify me that backups are done. Otherwise all Readynas emails get filtered to a readynas folder that I review once in a while.


Have narrowed it down to 1 directory with several long files names. It contains 30 files and about 30% has file names over 128, but no longer then 133 characters. That is still way less than the 255 max length.


Also a long portion of these filenames is the same. The difference only occurs after about 100 characters.
Tried removing the hidden or archive flags and even the ACL, but that doesn't make any difference. Changed hidden files starting with . to names without dot. Doesn't make any difference either. Also the length of the path is not relevant to the problem. I now put the dir contents in \\NAS-XX-XX-XX\readydrop\metadata\plugins\org.eclipse.debug.core\launches, so nothing special I would say. I also tried to reduce the problem down to one file, but here's where it gets really strange.

If I remove a couple of files, the backup suddenly succeeds. But it doesn't matter which files are removed, as long as the total number of characters of all the filenames stays below 2112.
So I decided to keep all the files but reduce the number of characters in some filenames, so the total drops below the 2112 threshold.
Just adding 1 character to reach this threshold is the trigger point for the error "Destination is read-only" to occur. So 2112 produces the error, for 2111 characters the backup works.

But still not closer to a solution. Any thoughts, anyone?
fotografeer.nl
ReadyNAS 516 / ReadyNAS 312
Message 15 of 25
0 Kudos
Reply

I had similar issues. I would format ntfs, do a backup (which appeared to be successful), and then subsequent ones would fail due to USB being read-only.

In a fit of rage, I formatted the USB drive as ext4. Problem went away. I can live with this.
Message 16 of 25
0 Kudos
Reply

We've been having these issues since the original OS6 and it's only on NAS drives were the USB drive is unplugged after backing up.

We have a numbe rof customers who rotate between two or more USB backups and even when you select 'Eject after backup' every few weeks this problem occurs.

Customers with only one drive that is permenantly connected have never had this issue, so it's a bug in the software or hardware.

In most cases, if you mount the drive in a PC and let the OS "repair" it, the drive becomes readable again.

Usually what is happening is that the dirty bit is being set on the drive.

Have been looking for a solution for this problem for a long time, but never managed to find the root cause.

In the end, I decided to remove the offending subdirectory that contained a file backup of a Windows system. This solved the problem with the backup procedure.

Sadly, I wish that was the case for our customers! We've now tried reformatting the backup drives as NTFS and HFS+ but the problem always comes back at some point.

The configuration is cumbersome, but I managed to configure backup of volume:data to USB right USB to dir /data.

Plans are for me to build a backup scenario with 2 external drives around that. 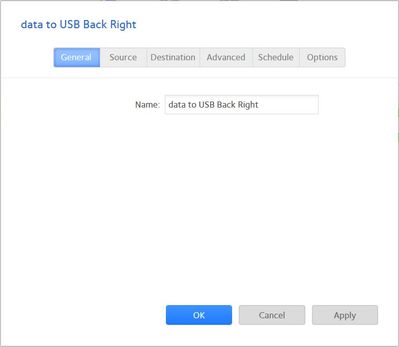 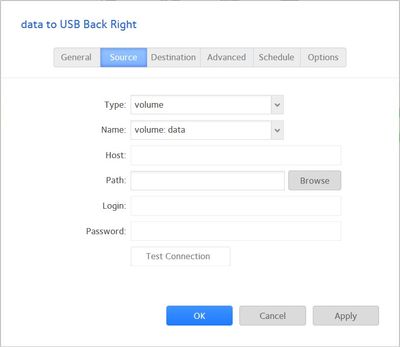 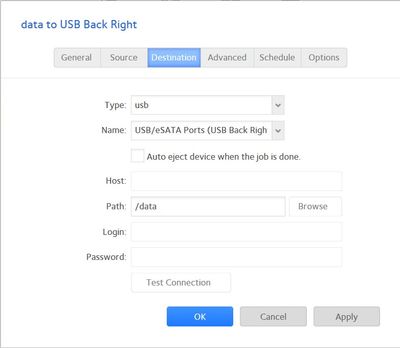 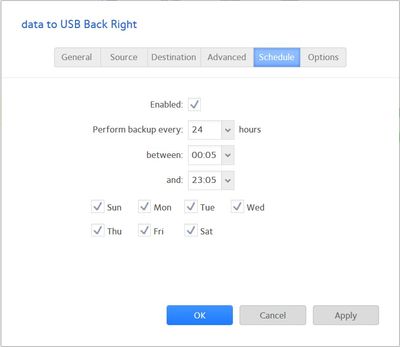 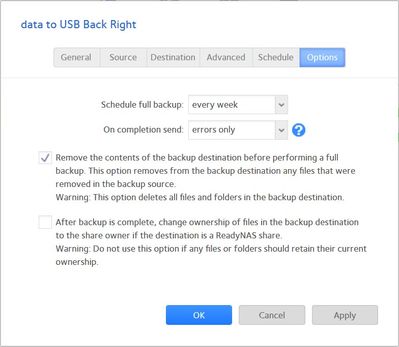 Hope it works for you, this is the scenario that fails every time for us. It's when you select the 'auto eject when done' that causes the problem, as the system can't gracefully unmount the drive, so causing the 'Read only' errors after x number of backups
Message 22 of 25
0 Kudos
Reply

Haven't used 'auto eject when done' and not planning to use it in the future. This is what I'm planning to do every two weeks:

1) Verify backup task is finished and status shows "Ready" or "Completed" (and not "In Progress").

3) Store it in a safe location.

5) Verify the backup process runs on the next scheduled time.

During the two weeks I will just let the external drive on and attached to RN USB port. Since I don't have a high change rate on the data, I think this suites my needs.

I had similar issues trying to back up a shared network drive to another netwrok drive that only I could see. After the initial backup it would ofcourse only update the changes. After a recent update to the newest software for the shared NAS the back up function stopped working.

"destination is read-only or files/folders could not be created. Check if these files or folders meet the destination file system limitation."

The destination is not read only. I unmounted the drives and hooked them up directly to my PC and scanned the file system with that.....blah blah blah. I tried a ton of different things before I finally just renamed the old back up folder and created a new empty one. The next backup then repopulated this new folder and everything works fine. Subsequent back ups have ran fine as well. I don't know if anyone else will find this helpful but it worked for me.

On a side note, I would be curious to hear an explanation for why this problem even occurred. Why would an update cause the system to erroneously identify a file as read only?

The status info stored on the drive includes a "dirty' bit, which usually ends up set if if the disk is not properly dismounted - esp. if a file copy was in progress when that was done.

If it is set (for whatever reason), the volume is mounted read-only by the NAS.  On Windows, it results in a scan/repair prompt.

Clearing the dirty bit generally is only done as part of a scan/repair process that ensures the NTFS structures are ok.  The NAS doesn't have the ability to do that, so you need to connect the drive to a system that can do it.

Your situation with the backup might have had a different cause of course.